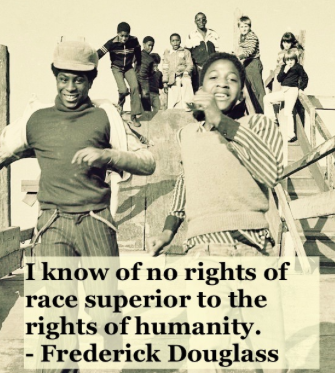 Much has been written of late regarding the widening divide within the American body politic and communities in general. Yes, it is, indeed, widening. But why? Perhaps, as the left is so often loath to do, we should look back into history to see what we can glean.

Lucas E. Morel, Professor of Politics at Washington & Lee University gave a speech at the dedication of a statue of Frederick Douglas at Hillsdate College in May 2017. In it, he described how Douglas, a prolific writer, was quite strong in support of the abolitionist view of slavery. He went on to describe how, on January 21, 1863, Douglas spoke to a ladies’ literary society group at Hillsdale College. His speech was entitled “Popular Error and Unpopular Truth”.

In this speech, he pointed out the fact that, “There is no such thing as new truth. Error might be old or new; but truth is as old as the universe.”

Daniel Patrick Moynihan put it another way, “Everyone is entitled to his own opinion, but not his own facts.”

In a time of great upheaval in America, Frederick Douglass, gave no quarter to those who would pit one faction against another to win political points. Unfortunately, today’s Democrat Party seems to have gravitated to such divisiveness in a way that surpasses anything seen before in our country. Whether based on race, religion, gender preference, or other imagined dividing lines, it matters not to any who wish to “divide and conquer” for political power.

The Founders’ Declaration of Independence from Great Britain clearly establishes the equality of man at a time when, unfortunately, actions to the contrary spoke loudly that it applied to “white Europeans only.” It took more than another half-century for the leadership of our country to reach the conclusion that slavery was a moral wrong. It took many more decades until our Constitution was amended to specifically guarantee universally equal treatment before the law and the right to vote for all. Up to that point, it was ambiguously silent in that regard, allowing some to wrongly interpret it.

As we reached the 2nd World War, we were still struggling with institutions that lingered on a “separate but equal” view particularly regarding race. The other categories that now saturate ‘identity politics” were yet to even enter the discussion.

But even in the 1860s, as Morel related, Frederick Douglas refused to take the position that there was any room for “race pride” in the discussion. Douglas has written, “It has long been the desire of our enemies, to deepen and widen the lines of separation between the white and colored people of this country.” His view was simply that the only differentiation between citizens of America was at the level of the individual citizen. In that aspect, each was a unique and independent entity. Beyond that, group identities were divisive. He was ever so correct in that view.

We have only to look as far as the nearest news feed or magazine to find a plethora of different “identity groups” clamoring for attention, benefit, or reparations for some perceived wrong. Is it now time – or past time – to look forward to the future instead of lingering on a less-than-ideal past? All the injustices should have died to us with the death of those who perpetrated them.

We should all periodically re-read the Declaration of Independence. It is truly an enlightening document when studied in some detail. It makes a convincing case for the fact that “all men are created equal…(and) endowed by their Creator with certain unalienable rights.” Notice that government is conspicuously absent from that quote. When government is distorted by those who would pit one group of individuals against another while failing to acknowledge the common interest we all have in constructively working to enhance the strength and vitality of our national community, our system will eventually begin to fail…as it seems to have done over the past decade.

It is unfortunate that the Democrat Party and those who would promote identity politics in an ever-accelerating manner would choose, at a time when many challenges from without and within face our nation, to do so much to weakens our unity and strength as a country.

The creation of legal requirements that allocate special rights to one group but not another is a worsening problem as well because as we apply these special rights to one group, we necessarily diminish the rights of another group. The result is effective as a political tool to curry favor with certain groups that willingly provide votes and campaign funds in support of those who are creating these problems for their own purposes.

Yes, there is more work to be done and there will always be a very small percentage of our countrymen that will continue to foment hatred and anger toward those who are different than themselves. It is vitally important that the baiting that these small minorities and those who promote dissent for political gain be seen for what it is. These people cannot be allowed to succeed.

Morel also pointed out that in his strong dissent to the infamous Plessy v. Ferguson case Justice John Marshall Harlan stated his case clearly in what is a most accurate summation of our constitution’s mandate on the subject:

“Our Constitution is color-blind, and neither knows nor tolerates classes among citizens. In respect of civil rights, all citizens are equal before the law.”

We should, therefore, ensure that this viewpoint – which should be much closer to fact than opinion – prevails throughout our country, so that the divisiveness of “special rights” being bestowed upon small groups is no longer supported by our elected officials.

We simply need to acknowledge the value of being not hyphenated-Americans but rather just simply Americans.

One can only pray our people consider carefully the message of our Savior and learn the wisdom of that message as it relates to life in general and this issue in particular.

To all Americans, I take this occasion to hope you had a Merry Christmas and enjoy a Happy New Year!

Mark Morales on the Miracle of Jesus Christ