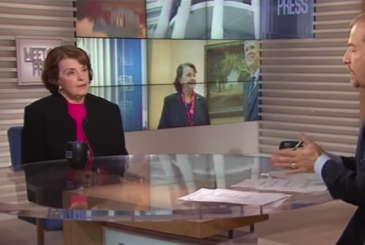 The Russian collusion story has totally fallen apart on the left. In fact it was always a work of fiction. But now that it’s become obvious, the Democrats have moved to the next phase of their undermining of President Trump: Obstruction of Justice! Sounds like a new Hollywood Superhero movie.

In a recent interview with Chuck Todd, Senator Diane Feinstein had this to say:

“I think, what we’re beginning to see is the putting together of a case of obstruction of justice. I think we see this in the indictments, the four indictments and pleas that have just taken place, and some of the comments that are being made. I see it in the hyper-frenetic attitude of the White House: the comments every day, the continual tweets. And I see it, most importantly, in what happened with the firing of Director Comey and it is my belief that that is directly because he did not agree to lift the cloud of the Russia investigation. That’s obstruction of justice.”

Notice that none of what she said was based on facts or evidence. It is her BELIEF. And Senator Feinstein must have totally missed the fact that Comey said Trump was NOT under investigation by the FBI. And Comey also lied to Congress (here and here).

Fortunately we have people like Alan Dershowitz (not a conservative or Republican by a long shot) who actually knows the law and the extent of Presidential powers:

When George Bush, the first, pardoned Caspar Weinberger in order to end the investigation that would have led to him, nobody suggested obstruction of justice. For obstruction by the president, you need clearly illegal acts. With Nixon — hush money paid, telling people to lie, destroying evidence. Even with Clinton, they said that he tried to influence potential witnesses not to tell the truth. But there’s never been a case in history where a president has been charged with obstruction of justice for merely exercising his constitutional authority. That would cause a constitutional crisis in the United States.”

I agree with him. It would cause a Constitutional crisis. But the left doesn’t care about that. As long as they get rid of Trump, the ends justify the means. And sadly there are some Republicans that would go along with that. It’s Trump vs. The Swamp.

But back to Feinstein. I think there are several things going on here:

“Well, I feel badly for General Flynn. I feel very badly. He’s led a very strong life, and I feel badly. I will say this, Hillary Clinton lied many times to the FBI. Nothing happened to her. Flynn lied, and they destroyed his life. I think it’s a shame. Hillary Clinton on the Fourth of July weekend went to the FBI, not under oath, it was the most incredible thing anyone has ever seen, lied many times, nothing happened to her. Flynn lied and it’s like they ruined his life, very unfair.”

There is one thing I am curious about. Why hasn’t Trump shut all this down if he knows none of this is true? And he would know. The fact that Trump hasn’t done so is a good indicator that he has nothing to hide and has been telling the truth all along. He may also be letting this play out, figuring that in the end this will hurt the Democrats more than him. If the Democrats want to dig their own grave, give them a shovel.

In the meantime people like Diane Fenstein will continue to make outrageous statements to pander to their radical and angry base.

Book Review: The Hand of the Wicked by Bob Young