Liberals, Democrats, and anyone else who reviled Trump insisted that Vladimir Putin perhaps huddled in a dark room whilst cackling and vigorously rubbing his hands together, plotted to undermine the campaign of Hillary Clinton and ensure that Trump was installed by hook or by crook. The tinfoil hat-grade allegations run from the relatively benign – Russian intelligence operatives ran ads on Facebook to campaign for Trump – to true conspiracy theory gold along the lines of actual computer hacking to steal votes. The deafening shrill continues to this day, almost a year later. It’s a little funny, really, since in the waning days of the race, when polls suggested that Trump was doomed, many of these same people were the ones worrying that he would do exactly what they’re doing now: questioning the results, and deliberately trying to raise doubts about the legitimacy of our electoral process.

It is rather ironic, then, that not only have the endless allegations of Russian collusion for Trump failed to bear any fruit, but we now have truly solid evidence that if anyone was behaving inappropriately with the Russian nation, it was the darling of Trump’s accusers: Hillary Clinton herself. 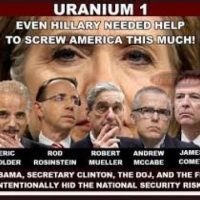 Confirmation now exists that Uranium One, a Canadian company with extensive mining rights over American Uranium, was sold in parts to Rosatom, which is Russia’s nuclear energy agency. This occurred in 2009, reached its apogee in 2013, when Rosatom gained full ownership of Uranium One. This deal essentially handed Russia control over about 20% of American uranium production.

It should come as a surprise to precisely no one that uranium is a strategically critical asset to national security, being essential in the production of nuclear weapons. Because of this, Rosatom’s purchase of Uranium One required approval by the Committee on Foreign Investment in the United States, which is an intra-governmental agency representing many important federal bodies – including the Department of State. Guess who was or Secretary of State from 2009 to 2013, which would be Hillary Clinton.

It gets worse. Turns out that at this same time, Russia was arranging was millions of dollars to be donated to the Clinton Foundation. How this requires more than a cursory investigation and is not simply seen as naked bribery is anyone’s guess, but the conflict of interest is painfully obvious.

If we are honest, though, the entire Obama administration is responsible. President Barack Obama was well aware of the Uranium One deal at the time it was being negotiated, and he did nothing to stop it or even question it. And this, it is more than a little interesting to note, came at a time when FBI investigations were underway into extortion, money laundering, kickback schemes, and – yes – bribery between Russia and the United States. Obama and Clinton both knew well the political and legal climate, and moved forward with a deal that sold America’s uranium and sold out America’s interests.

What is perhaps even more outrageous is the fact that Robert Mueller and Rod Rosenstein, two people intimately involved in the conspiracy theory investigation of President Trump’s supposed Russian collusion, were also tied up with the Uranium One sale.

There seems to be no end to the conflicts of interest here. A “vast conspiracy” linking the Clinton Foundation, its donors, a uranium deal, Hillary and Bill Clinton, Susan Rice, David Petraeus, Jim Comey, Robert Mueller, Loretta Lynch, and a “secret informant” William D. Campbell, a lobbyist, recently confirmed to Reuters that he is the informant who will testify and provide documents to Congress about the Obama Administration’s 2010 approval of the sale of Uranium One.  And there may be others involved in these nefarious activities.

Whilst liberals cry out over allegations of Russian interference for Trump in the election, without a shred of actual evidence, at the same time, as a documented, proven sale of our Nation’s uranium interests is known to have occurred under Clinton, something is very, very wrong.