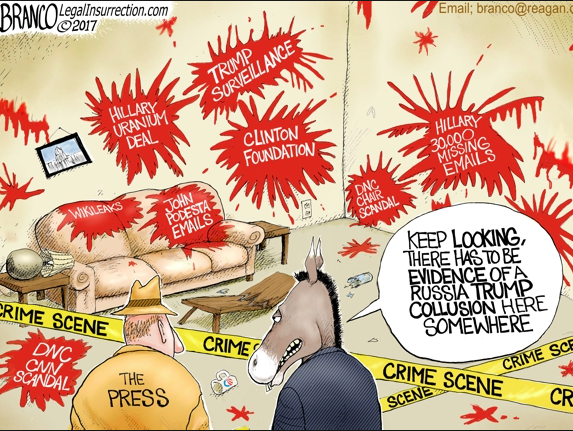 Proof of the Russian collusion is finally making sense. As I have continuously pointed out, and even ruffled feathers of party loyalist and establishment supporters, the Alynski tactic of blaming the opposition of a wrong doing, false or not, to cover up your exact same offense, continues to go on. In fact, I have come to listen, on purpose, of any charges the left says about the right, as to know what to focus on when investigating the left. This particular issue, “the Russian collusion” charge by the left and pushed to have happen, is happening. The left even stacked the deck in the special “unbiased” independent investigation team led by Robert Mueller and focused on President Trump’s collusion with the Russians.

Now let us look at some new highlights, shall we?

Let’s start with a man by the name of Peter Strzok:

It was the Independent investigation headed by Robert Mueller and the Department of Justice that kept this information from Congressional investigators, and refused to allow Strzok to be interviewed. Why this is not a huge conflict of interest is beyond me. In fact, in October, the Wall Street Journal’s board even said that because of these unfolding revelations, Mr. Mueller needs to stand down from this investigation for several reasons, in a titled article called: Democrats, Russians, and the FBI.

Another name we need to notice is Bruce Ohr:

Now here is the part that should make you scratch your head: both, Peter Strzok and Bruce Ohr were appointed to be on the “unbiased” Robert Mueller’s Russian investigative team.

Let that sink in a moment.  Both are very anti-Trump and both have direct connections with Russia itself.

This evidence clearly shows the average citizen, that the Obama administration’s FBI, was working with the Clinton campaign and the DNC, to pay the Russians for their input, so that a hired British spy could author a dirty dossier to be used to affect the outcome of the 2016 election, by framing and going after the Trump campaign.

So there was indeed an act of Russian collusion from an American candidate, by using unconstitutional means, to affect the outcome of our American presidential election, however, the guilty party in NOT Donald J. Trump, but Hillary Rodam Clinton, her campaign and the Democratic National Committee. As time goes on, I am sure, it will point out that other high-ranking members of the FBI, the Attorney General’s office, and others within the Obama administration will be found just as guilty.

All of these, are dirty tactics, that are Politically Motivated and unconstitutionally implemented to achieve the objective of all those mentioned.You can find my resources for this by watching the congressional hearings that grilled the current FBI director Mr. Wray, which took place last week and are continuing this week.

I will not be surprised at all to find that some progressive Republicans will be at fault in this fiasco as well, such as, Senator McCain, for example, but for now we will just have to wait and see. As for all of this blatant, in your face evidence of the left’s collusion with the Russians, it should demand an apology for all those involved in the Trump campaign, and start prosecuting the real guilty parties in this treasonous situation. We the People need to open our eyes and stand up and defend that which our elected officials keep failing to do, our Constitution. We are losing our Republic, but we have this oligarchy on the ropes, and we need to knock it out.

Emery McClendon: Move Over Fake Leaders, the Path Has Been Paved