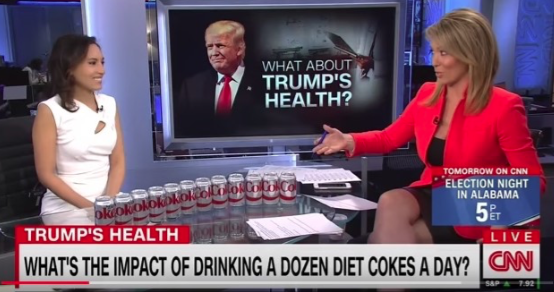 If you were watching CNN earlier this week you wouldn’t have known much about the attempted terror attack in NYC. Why? Because that network was hot on the trail of an even bigger story: President Trump’s personal habits – TV, eating and drinking, and specifically the amount of Diet Coke that he drinks. They actually used this topic as a launching point from which to question his health and mental state/capacity as President. They devoted SEVEN segments to it over a 24-36 hour period!

First up was Alisyn Camerota with Trump biographer Michael D’Antonio on “New Day”:

Alisyn: “We have breaking news so I may have to cut away from you but while we get our sources in place and we get more information you and I will chat”.

Neither rain, sleet snow or terrorist attack will stop us from bashing Trump.

Michael: (on Trump’s watching TV): “People who have been around the President for any real period of time know that he is a television addict. He’s probably watching us right now because as the Times reported he tunes in to CNN when there’s breaking news. CNN is the strongest network in hard news”.

So is that why they are spending time covering Trump instead of the terror attack? More like hard to believe news.

Can I get a ride on TFO?

Alisyn: “When I read this I think ‘This is not..ok…what doctors would recommend. This is not the healthiest diet. However obviously President Trump seems to have boundless energy.”

Michael: “Well some of that energy is obviously caffeine.

We want a President who’s healthy.”

The Democrats apparently didn’t in 2016!

You don’t say? A man of 40 is mentally quicker than a 70 year old. Fascinating.

Later that afternoon Brooke Baldwin had gastroenterologist Dr. Samantha Nazareth on her show:

Baldwin: It’s one thing to say 12 Diet Cokes, 12 Diet Cokes, right? If we’re saying, according to The Times, that he drinks this many, what does this do to the brain and the body every day. What does 12 do to you?

Nazareth: What happens with 12 is that this essentially replaces what other liquids will provide to your body. So your body, as you know, is mainly water. The good majority of your body is water. Your body needs water to survive to do everything, to speak, to be on TV, everything. And by you drinking this, it’s essentially replacing that area in your body…

Nazareth: Not necessarily dehydrating but it’s replacing a liquid that you can take, which is water. You should be drinking water, not this.

Nazareth: Not necessarily. The behaviors that are associated with drinking diet soda, people think that, “If I drink diet soda, can I have that piece of cake now?” Can I be able to do all these other things that if I have regular soda maybe have to stay away from all these sweets and everything else that may not be so healthy?

Well that does explain one thing – James Comey obviously doesn’t drink Diet Coke. That’s why Trump only gave him one scoop of ice cream while he had 2!

And I love how they felt it was necessary not only to have the 12 cans lined up on the table but to use them as props. Is this news or Sesame Street (“the number of the day is 12!”). Actually I think we would learn more from Sesame Street.

Monday evening Jeanne Moos had a humorous take on it at the end of “Out Front”. And Anderson Cooper actually spent time discussing it on his panel. Wait – Wolf Blitzer didn’t cover it? What a maverick!

Then it was Don Lemon’s turn, discussing it with Dr. Sanjay Gupta:

Lemon: “What does that do to you?”

Gupta: That’s a lot of caffeine! We don’t know if he takes other sources of caffeine. It causes a lot of irritability, insomnia. Sometimes you become more unfocused when you’re drinking that much caffeine.

Lemon: There’s a study released this last year researchers from Boston University School of Medicine found that people who drank one diet soda per take were three times as likely to be diagnosed with dementia or suffer from a stroke.

Gupta: You tripled, actually, the risk of dementia and stroke linked to diet soda. Is there something about a diet drink, the aspartame or something that’s causing this problem? They don’t know still. Could it be the people who are more risk for stroke and dementia also drink diet sodas?

I am seeing a lot of “not necessarily” and “I/we don’t know”. But remember, CNN is #1 in hard news! They just couldn’t pass up an opportunity to bash Trump and question his mental stamina as President. News on the terrorist attack would just have to wait.

The focus continued on Tuesday morning. Dr. Sanjay Gupta was on again, this time with Alisyn Camerota and Chris Cuomo. They analyzed a recent speech by Trump where he slurred his speech a little and wondered if this was caused by the diet cokes (a stroke perhaps)? (It was an 11 minute speech and he appeared to slur ONE word).

“Obviously you hear the difficulty he has forming words,” Gupta observed.

The doctor said if someone has an issue with speech, the “first big concern” is a stroke.

“Is he having some sort of a TIA, or stroke?” Gupta wondered.

“There was really no suggestion of stroke there. This was something clearly that seemed to be inside of his mouth.”

Did the media cover any of Hillary’s health issues when she was coughing and collapsing?

Last thought. Weren’t we told decades ago how regular soft drinks were bad for you and that people should drink Diet sodas? So now they are telling us that is bad? I wonder if eggs are good or bad for us these days?

Now, if you’ll excuse me writing this article has made me hungry and thirsty so I think I will go get some KFC and Mountain Dew.