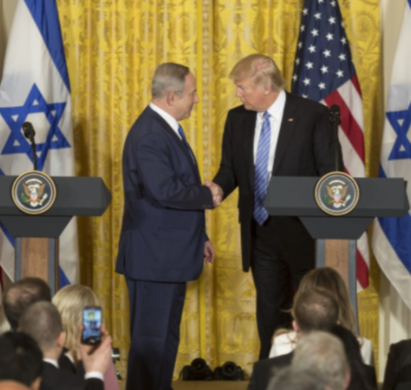 This week President Trump declared not only that Jerusalem is the capital of Israel, but that the United States plans to move it’s embassy there (see full statement here):

“I have determined that it is time to officially recognize Jerusalem as the capital of Israel. While previous presidents have made this a major campaign promise, they failed to deliver. Today, I am delivering. I’ve judged this course of action to be in the best interests of the United States of America and the pursuit of peace between Israel and the Palestinians. This is a long-overdue step to advance the peace process and to work towards a lasting agreement. Israel is a sovereign nation with the right like every other sovereign nation to determine its own capital. Acknowledging this as a fact is a necessary condition for achieving peace.

That is why, consistent with the Jerusalem Embassy Act, I am also directing the State Department to begin preparation to move the American embassy from Tel Aviv to Jerusalem. This will immediately begin the process of hiring architects, engineers, and planners, so that a new embassy, when completed, will be a magnificent tribute to peace.”

I find it interesting that Trump feels this will help bring peace between Israel and Palestine in light of the negative reaction he has gotten from most of the so-called “experts”. They believe this is a horrible decision and will only destroy the chances for peace. But what do we have to show for our efforts the last 50 years? Has there been peace? No. And we’ve pretty much tried the same thing over and over expecting different results. Isn’t that the definition of insanity? It appears to me that Trump’s decision could very well be what is needed to shake things up. At the very least it is thinking outside the box.

The reaction from Hamas was predictable:

“We should call for and we should work on launching an intifada in the face of the Zionist enemy,” Hamas leader Ismail Haniyeh said in a speech in Gaza.

Haniyeh, elected the group’s overall leader in May, urged Palestinians, Muslims and Arabs to hold rallies against the U.S decision on Friday, calling it a “day of rage”.

“Let December 8 be the first day of the intifada against the occupier,” he said.

Hamas also stated Trump has opened ‘the gates of hell’ .

This all sounds pretty alarming and unprecedented. But a little digging reveals this is nothing new from Hamas and/or the Palestinian leaders. There have been 2 (maybe 3) declared intifadas before:

The First Intifada or First Palestinian Intifada was a Palestinian uprising against the Israeli occupation of the West Bank and Gaza. The uprising lasted from December 1987 until the Madrid Conference in 1991, though some date its conclusion to 1993, with the signing of the Oslo Accords.

The Second Intifada was the second Palestinian uprising against Israel – a period of intensified Israeli–Palestinian violence. It started in September 2000, when Ariel Sharon made a visit to the Temple Mount, seen by Palestinians as highly provocative; and Palestinian demonstrators, throwing stones at police, were dispersed by the Israeli army, using tear gas and rubber bullets. Many consider the Sharm el-Sheikh Summit on 8 February 2005 to be the end of the Second Intifada.

The 2014 Jerusalem unrest, sometimes referred as the Silent Intifada (other names given include urban intifada, Firecracker intifada, car intifada, Jerusalem intifada, and Third intifada) is a term occasionally used to refer to an increase in violence focused on Jerusalem in 2014, especially from July of that year. Although the name “silent intifada,” appears to have been coined in the summer of 2014, suggestions that there should be or already is an incipient intifada have been circulated by activists, columnists, journalists and on social media since 2011.

So we’re either on the third or fourth intifada (or maybe this is a continuation of the third?).

Now, about the ‘day of rage’. Apparently this is a lot more common than the intifada:

July 2017: Some 2,000 members of the Hamas terror group marched in the Gaza Strip Wednesday to mark “victory” after Israel removed contested metal detectors from entrances to the Temple Mount a day earlier in a bid to calm tensions. The group also called for a fresh “day of rage” throughout the West Bank on Friday to protest continued Israeli security measures at the site. More info here.

May 2017 (during Trump’s visit to the region) – A Secret Day of rage: In a statement published earlier this week, the National and Islamic Forces in Ramallah and El-Bireh, a coalition of various Palestinian political and terror groups, called for a “Day of Popular Rage” in the West Bank to protest the imminent presidential visit.

April 2017: Ongoing clashes have erupted across the occupied West Bank on Friday, with several Palestinians injured, on what Palestinians are calling the Day of Rage — initially called for by the Fatah movement — in support of hunger-striking Palestinian prisoners who entered the 12th day of a mass hunger strike on Friday.

October 2015: Hamas is calling for a “Day of Rage” on Friday throughout Judea and Samaria and encouraging rioting and clashes with IDF forces. Palestinian Arab terrorist groups have called for a “Day of Rage” nearly every Friday over the last few weeks. You don’t say?

November 2014: An Israeli Arab leader’s bellicose calls for open warfare and Hamas posters urging West Bank Palestinians to “avenge the deaths” of terrorists who carried out recent attacks are the latest incitement towards a “Day of Rage” after Muslim prayers Friday.

March 2010: Palestinians hurled rocks and burned tires in several neighborhoods in East Jerusalem Tuesday to protest the reopening of a landmark synagogue after more than 60 years. About 3,000 officers were deployed in the city after the militant group Hamas declared Tuesday a “Day of Rage.”

October 2009: Hamas has declared Friday, Oct. 9, a Day of Rage in response to a perceived Israeli provocation at the Temple Mount area.

They apparently rage a lot, especially on Fridays. So this is nothing new.

Time will tell if Trump’s strategy will pay off but it is courageous. And another campaign promise he has kept.