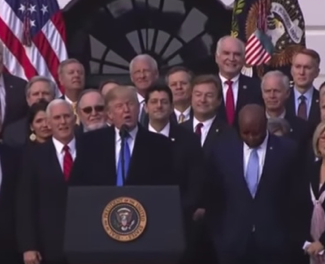 A hundred years from now historians looking back on the Trump presidency may view December 20, 2017 as one of the most significant event in his time in office. The Republican lead House and Senate passed a sweeping and pro-growth tax reform that will shape the economy for years to come.

Here are a few highlights of the bill (complete summary here):

“The Obamacare mandate was held by the Supreme Court to be tax. Whatever philosophical positions you may have had before that, that’s the law of the land,” said Sen. Tom Cotton, Arkansas Republican, who spearheaded efforts to undo it in the tax bill.

It’s also the heart of Obamacare. And [repeal] allows us to pay for more tax cuts for working families and businesses that create jobs in this country, while at the same time avoiding a very punitive tax that falls squarely on working families and poor people,” he said.

Democrats that in 2012 praised John Roberts are now howling. I doubt they’ll be sending him any Christmas cards. I think it is perfect justice.

Probably the most outrageous response to the tax reform (so far, as the Hollywood left hasn’t made a PSA on it yet) was from Nancy Pelosi:

“This GOP tax scam is simply theft, monumental, brazen theft from the American middle class and from every person who aspires to reach it,” Pelosi said. “The GOP tax scam is not a vote for an investment in growth or jobs. It is a vote to install a permanent plutocracy in our nation. They’ll be cheering that later. It does violence to the vision of our Founders”.

Would those be the same founding fathers the left called racist earlier this summer?

President Trump held a victory celebration this afternoon with the passage of this bill. This is a major milestone and wonderful Christmas gift to the American people. And it should give the Republicans momentum going into the mid-term elections. Can they keep it going?

I know I am not tired of winning!