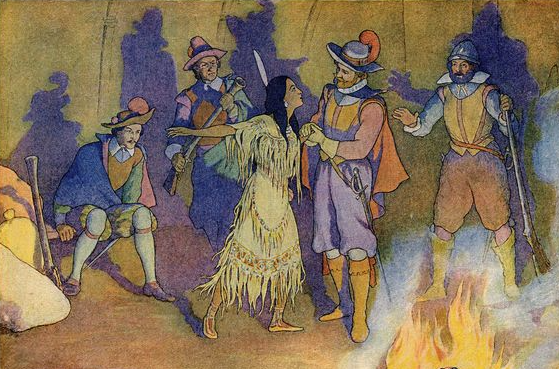 This past Monday (November 27) President Trump was honoring World War 2 Native-American code talkers when he said this:

“You’re very, very special people. You were here long before any of us were here. Although we have a representative in Congress who they say was here a long time ago. They call her Pocahontas. But you know what? I like you. Because you are special.”

Predictably this triggered the media into a hyperventilated frenzy. They just couldn’t help themselves in their reaction and as usual, participated in group think:

Chris Hayes: ‘He is obsessed with this idea, this particular slur…’

Van Jones: ‘If he’s not a racist, and if those comments are not racist, then the term has no meaning at all.’

How exactly are his comments racist? Of course to liberals it is racist because he is being critical of Elizabeth Warren and questioning her heritage. Just like any criticism of Obama was racist. But those of us who live in the real world don’t see it that way. Neither did Thomas Begay, one of the Native-Americans honored. When asked if he was offended by Trump’s statement he said, “The marines made us yell ‘Geronimo’ when we jumped out of planes and that didn’t offend me either.”

Van Jones is correct though. The term has no meaning because the comments were not racist and Trump isn’t a racist. And it’s people in the media like Van Jones that are guilty of causing this. They have played the race card so often that it no longer has any relevance. They have attempted to use it against every Republican Presidential candidate since I started voting in 1984.

What Trump did do successfully in his comments was to compare Elizabeth Warren unfavorably to the World War 2 Native Americans. Trump believes Warren has embellished her history in claiming Native American status. Hence the title ‘Pocahontas’, which he has used against her before. (For a detailed history of Warren’s claims to be 1/32 Cherokee, see this article).

This is purposed strategy which Trump uses effectively against his opponents – such as “Low energy Jeb”, “Crazy Bernie” and “Crooked Hillary”. And of course “fake news” (while not the originator of that one, he has taken it and made it his own). So while the media cries RACIST, the labels stick in people’s minds. In his new book “Win Bigly”, Scott Adams calls this a “linguistic kill shot.” Specific to Trump calling Warren “Pocahontas” he says:

“Warren at one time in the past claimed to have Native American blood. It turns out she can’t substantiate that claim. Apparently her family believed they had Native American ancestors, so it wasn’t a lie. She was just wrong. Trump made it more famous by calling her Pocahontas whenever she criticized him publicly. It was visual in the sense that you imagine her in full Native-American garb when you hear it. It makes you stop and think. But best of all, it was silly. And it was easy to meme. The Internet loved it. The silliness of it detracted from Warren’s credibility and gravitas. It was harder to take her seriously after the nickname did its damage.”

I don’t think the media or the politicians in Washington have figured this out and I doubt they will. The next few years are going to be fun to watch.