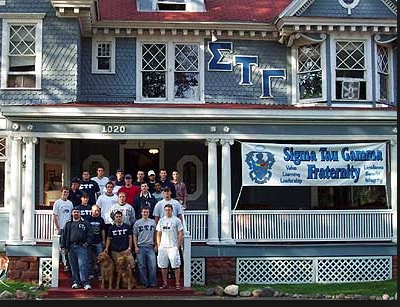 Contrary to the alphabet crowd, human beings are born in two varieties. However, as one might expect in today’s world, Harvard University fails to see this as a meaningful difference. That blindness to reality spawned a ridiculous policy a few years ago that was discussed in a recent article from the Washington Post. It describes how Harvard leadership has decided to continue the ill-conceived policy that punishes undergraduates who join organizations that do not admit more than one gender. Otherwise known as fraternities and sororities.

Other likely groups whose membership might bring punishment may include the Harvard Wives’ Club or Harvard Hubbies’ Club, but that is a bit of speculation on my part. I wonder if it includes the “Skull and Bones Club”.

The vote to continue this policy that denies Harvard’s undergraduates any right to hold office within recognized student government organizations or receive recommendations for post-graduate appointments such as a Rhodes’ Scholarship seems counter-productive in ensuring their undergraduates the type of future that a Harvard degree is supposed to ensure.

For instance, fraternities and sororities serve to benefit their members long after they leave their university days behind them. Connections made through such social associations can lead to highly successful networking opportunities when searching for career advancement after school is a distant memory.

A well-rounded individual should have opportunities for exposure to different life experiences throughout his/her college years. Since the rule in question applies to both male and female undergraduates, it appears that the rule would prevent straight people from associating with gay people (at least through formal groups). That would seem counter-productive as well.

What was lacking in the Post article was any rationale for the existence of this policy in the first place other than a passing reference to gender “equity.” What exactly is gender equity? How can difference genders be truly “equal” when they are intrinsically different? Why is it so terrible for men to have divergent interests from their female counterparts? Women don’t shave their faces. Men don’t shave their legs. At least in most cases, these are accepted truths. There are differences!

To me, this seems so typical of the left-heavy academic communities in America. They appear to be attempting to eliminate the distinctions between the genders as a means of forcing a “unisex” view of humanity that fits their mindset. That mindset appears to be that individuals can define their personal genders to be whatever they might imagine them to be (the alphabet list continues to grow week-by-week), and any organization that defines gender traditionally and restricts admission to any one gender is somehow denying “a right to join.” Now that’s one I had not heard before… a right to join.

My question is very simple. What ever happened to that “right to freely associate with whomever one chooses to associate?” Freedom of association has been a bedrock principle of American society since the beginning of time. Even after the introduction of specific laws denying the right to discriminate in housing sales, rentals, schools, etc., people naturally tended to congregate or settle in groups based on shared interests, nationalities, races, and sex. This is largely due to the emotional aspect of human nature that suggests that people wish to exist in surroundings and associations that make them comfortable. Nobody, for instance, enjoys being the only sober person in a room full of drunks, do they?

If people truly need to erase the differences between the sexes, why do we still see Hair Salons for women and Barber Shops for men thriving throughout our country? Will we begin to see government declare those establishments taboo? Doesn’t seem far from reality, does it?

This entire policy reeks of making mountains out of mole hills and needlessly restricting freedom of association in the name of, dare I say it, political correctness. That single expression has done more to divide and destroy the peace within our society than any other. We have the past eight years to thank for it becoming so much stronger than it was. Let’s hope that trend is reversed in the coming years now that a sizable portion of America has awakened to the reality that men are not women and women are not men. That reality continually fails to penetrate the skulls of the progressive academics and their followers.

Nothing I have written here should be construed as suggesting that one sex is better than another, but when it comes to the truth about the sexes, I must say, for once the French got something right when they proclaimed, “Vive la difference!”

Politics in the Days of Jesus

Daniel Greenfield: Everybody in the Media Knew