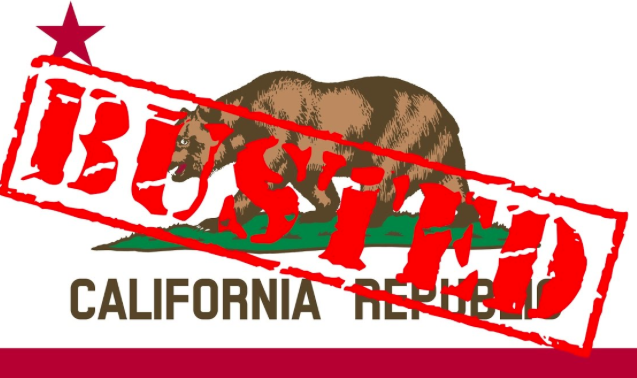 On Wednesday Judicial Watch announced that it “filed a federal lawsuit against Los Angeles County and the State of California over their failure to clean their voter rolls and to produce election-related records as required by the federal National Voter Registration Act (NVRA) (Judicial Watch, Inc.et al. v. Dean C. Logan, et al. (No. 2:17-cv-08948)).”
From Judicial Watch’s press release:

‘Eleven of California’s 58 counties have registration rates exceeding 100% of the age-eligible citizenry.’

Judicial Watch argues that the State of California and a number of its counties, including the county of Los Angeles, have registration rates exceeding 100%:

Eleven of California’s 58 counties have registration rates exceeding 100% of the age-eligible citizenry.

The entire State of California has a registration rate of about 101% of its age-eligible citizenry.

Judicial Watch points out that this is due in part to the high numbers of inactive registrations that are still carried on California’s voter rolls:

About 21% of all of California’s voter registrations, or more than one in five, are designated as inactive.

Although these inactive registrations should be removed after a statutory waiting period consisting of two general federal elections, California officials are simply refusing to do so.

Judicial Watch explains that, even though a registration is officially designated as “inactive,” it may still be voted on election day and is still on the official voter registration list. The inactive registrations of voters who have moved to a different state “are particularly vulnerable to fraudulent abuse by a third party” because the voter who has moved “is unlikely to monitor the use of or communications concerning an old registration.” Inactive registrations “are also inherently vulnerable to abuse by voters who plan to fraudulently double-vote in two different jurisdictions on the same election day.”

Judicial Watch sent a written request for public records on November 16, 2017, and another on November 29, 2017, seeking information about “the number of inactive registrations on the voter rolls in Los Angeles County,” but was told each time that there were no responsive records.

Last summer, Judicial Watch sent a broader request for voter roll records that Los Angeles County and the State of California are required by the NVRA to keep and to make publicly available. Nothing was produced in response to this request. Judicial Watch points out that it is impossible to believe that there were no responsive records:

Los Angeles County, with over five million active voters and massive list maintenance responsibilities, and the Secretary of State of California [must] have exchanged emails responsive to [Judicial Watch’s] request for “all email or other communications between the Secretary’s Office and all California County voter registration officials concerning . . . [i]nstructions to the counties concerning their general list maintenance practices and obligations” and “[n]otices to the counties concerning any failure to comply with their voter list maintenance obligations.”  Such emails should have been produced.

Section 8(a)(4) of the NVRA requires states to implement a program to remove ineligible registrants; and to turn over relevant records and information. Judicial Watch argues:

Judicial Watch asks that the court enjoin Los Angeles County and the state of California from further violating the NRVA, and compel them to “develop and implement a general program that makes a reasonable effort to remove from Los Angeles County’s rolls the registrations of ineligible registrants.”

Judicial Watch asks to inspect and copy the requested voter roll records. Judicial Watch sent a notice-of-violation letter in August 2017 to threatening to sue California and certain of its counties over their violations of the NVRA. California was one of 12 states to receive such letters from Judicial Watch.

“California may have the dirtiest election rolls in the country,” said Judicial Watch President Tom Fitton. “Federal law requires states to take reasonable steps to clean up their voting rolls. Dirty voting rolls can mean dirty elections. This lawsuit aims to ensure that citizens of California can have more confidence that their elections are fair and honest.”

Judicial Watch Senior Attorney and Director of its Election Integrity Project Robert Popper recently provided testimony to the Presidential Advisory Commission on Election Integrity concerning the NVRA. Popper was formerly Deputy Chief of the Voting Section of the Civil Rights Division of the Justice Department.

Judicial Watch sent notice-of-violation letters threatening to sue 11 other states having counties in which the number of registered voters exceeds the number of voting-age citizens, as calculated by the U.S. Census Bureau’s 2011-2015 American Community Survey: Alabama, Florida, Georgia, Illinois, Iowa, Kentucky, Maryland, New Jersey, New York, North Carolina and Tennessee. Judicial Watch informed the states that should they fail to take action to correct violations of Section 8 of the NVRA, it would file suit.

Judicial Watch previously filed successful lawsuits under the NVRA against Ohio and Indianathat resulted in those states taking several actions to clean up their voting rolls. Judicial Watch is currently suing Kentucky over its failure to remove ineligible voters as required by the NVRA, and is suing the State of Maryland and Montgomery County over their failure to release voting-related records.

Michael Ingmire on The Khattala Verdict: "An Insult to the Benghazi Victims"