Amsterdam’s HaCarmel restaurant sits between two other restaurants. The Jewish kosher eatery whose big blue sign boasts fish, meat and vegetarian options is sandwiched between a sidewalk café with its inevitable Heineken umbrellas on one corner of Amstelveenseweg and an ice cream place on the other corner. There’s an Italian restaurant across the street with some very nice front windows. 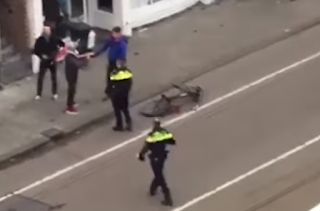 If the Muslim refugee had wanted to smash up any eatery, he had plenty of options. But he went to the Kosher restaurant. Inside were wooden chairs, white tablecloths and red roses. Outside came the guttural shriek of, “Allahu Akbar.” This was the battle cry with which Mohammed had inaugurated his massacre and enslavement of the Jews. The cuisine inside HaCarmel is Middle Eastern, but the attack showed why there are few Jews (or Christians) left in the Middle East outside Israel.

The Amsterdam cops had plenty of warning. The “Palestinian” was wearing a Keffiyah on his head, waving a large PLO flag in one hand and brandishing a club in the other while shouting, “Allahu akbar.”

Even in a city where 1 in 4 are Muslim, the attacker was putting on a hell of a display. He had done everything but put an ad in the paper announcing that he’s an Islamic terrorist. And so the police were already on the scene by the time the Islamic thug reached the Jewish restaurant.

Synagogues, kosher restaurants and any recognizably Jewish buildings in Europe are at risk of being attacked. Police officers and, in some countries, soldiers usually aren’t too far away from potential targets in nicer areas. But being there and actually stopping the attack is not at all the same thing.

Video shows the police officer arriving on the scene just in time. The Muslim refugee goes on shouting. Then he smashes HaCarmel’s front windows. The police, in typically European fashion, do nothing. Instead they stand there watching the Muslim thug as he smashes the glass with blow after blow as if they were attending the opening of an interesting art exhibit instead of a violent racist attack.

He starts smashing the door and the Amsterdam cops amble over for a better view. Their body language is casual and loose. They’re interested in the attack in the way that sightseers are. Maybe they’re admiring his Kosher restaurant window smashing techniques. But they’re not about to intervene.

A Muslim’s got a right to smash up a Jewish restaurant’s windows, is their attitude. Or maybe those are their orders. Their job is the usual job of cops to see that the situation doesn’t get out of control.

European cops do have their red lines. Even when it comes to outbursts of Muslim anti-Semitism.

Watching the video makes it clear what those red lines are. Muslims can safely smash Jewish windows while screaming, “Allahu Akbar”. It’s only when he finishes kicking through the glass and actually moves into the restaurant that one of the officers unhurriedly approaches him and urges him to come outside.

Then he’s finally tackled and arrested.

Once he was de-flagged, de-keffiyahed and taken down to the local police version of downtown, the “Palestinian” refugee told the police that he’s not anti-Semitic. It was just another of those Muslim attacks on Jews that have nothing to do with anti-Semitism.

Lefty politicians and the media rushed to blame Trump. But the Muslim refugee never mentioned Trump or Jerusalem. Muslims have been attacking Jews in Amsterdam long before Trump’s announcement.

Things were bad enough that cops dressed as Jews had been deployed to stop anti-Semitic attacks.

Rabbi Benjamin Jacobs, the Chief Rabbi of Holland, has had rocks thrown at him, he’s been called a dirty Jew and was nearly hit by a car. His house not far from Amsterdam has been vandalized five times. And the police have warned him not to travel by train. All this was before Trump had recognized Jerusalem.

Who’s doing all this?

According to the Jewish community’s anti-Semitism watchdog, 70% of anti-Semitic attacks in the Netherlands had been carried out by immigrants. And we aren’t talking about the Chinese.

Passerby routinely spit at the windows. Nazi salutes and middle fingers are also commonplace. But the good people offering Nazi salutes to a Kosher restaurant aren’t the ones that the left expects. When a Jewish broadcaster filmed a Rabbi walking through a Moroccan neighborhood in Amsterdam, the men offering them Nazi salutes were as Aryan as Arafat, but as Muslim as Mohammed.

HaCarmel isn’t located in a Muslim no-go zone. It’s a trendy area full of trendy eateries. The Heineken Experience and the Van Gogh Museum are less than 2 miles away. The Vondelpark is a few blocks away.

Left-wing politicians were quick to blame Trump. Reinier van Dantzig of D66, who touts Muslim refugees, blamed the “ill-considered statements of the leader of the free world.” But Trump didn’t come down to Amsterdam to smash a Jewish restaurant’s window. A Muslim migrant did that.

But meanwhile conservative Dutch politicians visited the restaurant in a show of solidarity.

That’s the usual shameful pattern in which the left excuses and defends Muslim anti-Semitism by blaming the Jews. “A distinction should be made between traditional anti-Semitism, which should be condemned and Muslim hatred for Jews, which stems from the ongoing conflict between Israel and the Palestinians,” Howard Gutman, Obama’s disgraced ambassador to Belgium, had argued.

The distinction is really an exception and a justification. Anti-Semitism is wrong unless Muslims do it. And Muslim anti-Semitism is just really a response to their oppression by the Jews.

The Kosher restaurant wasn’t the victim. It was the perpetrator.

After the HaCarmel attack, Daniel Baron, the owner’s son, began sweeping up the mess. Friends from the Jewish community came by to help. But the customers haven’t come drifting back. Muslim terror has already depressed the nightlife in Paris and other European cities. And Jewish restaurants have long been the targets of Muslim violence. The closing act to the Charlie Hebdo attack was the massacre at a Kosher supermarket in Paris before the Sabbath. Obama famously described it as a random attack on “a bunch of folks in a deli.” There have been lots of those “random” attacks by “lone wolves.”

But HaCarmel isn’t giving up.

“For what Trump did, they can break the windows ten more times,” Daniel Baron stated. “Jerusalem will still be Israel’s capital.”

Are Schools Purposely Dumbing Down Our Kids? A Teacher Speaks Up

Who Is Going to Guard the Guards?