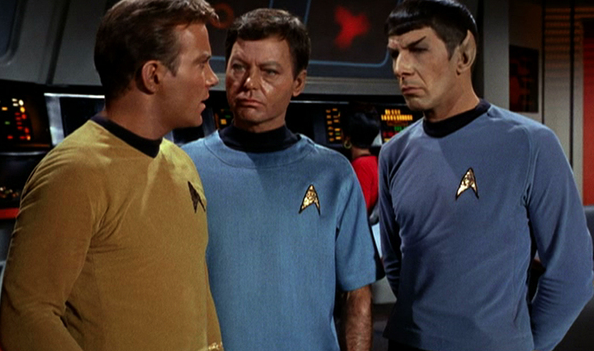 When I first became a fan of the original Star Trek it had just begun its first of three years on NBC-TV. There were already problems with the network stemming from the fact that the show was conceived as a message series by producer/writer Gene Roddenberry who desired to talk about race, religion, war, women’s rights and politics. This was the 1960’s and there was a lot of turmoil in our nation. Roddenberry wanted to do a series that would deal with contemporary problems, however the networks were not prone to such an idea. So he turned to science fiction. Something using a Wagon Train theme where a space ship with 420 individuals would visit new worlds and “go where no man has gone before.”

Star Trek was not an ordinary TV show despite having the typical makeup of an action adventure series. At the time no one realized that this program would become a giant in syndication, gain millions of fans around the world, and would come back in a successful series of motion pictures and lead to the spinoff of five more Star Trek series. What television networks were not ready for in the 1960s was something that would hit a responsive chord with a large number of people looking for something that would deal with meaty issues unlike the The Beverly Hillbillies and similar shows, and would do so in an entertaining style.

As a public school teacher at the time, I found points made in various episodes that could be used in my teaching. With help from Lincoln Enterprises, run by Majel Barrett, a star in the T.V. series and wife of Star Trek’s creator, I put together a slide show for use in school classrooms. Trek stars DeForrest Kelley and Grace Lee Whitney also read my script and gave me advice. For years I used this program in public school classrooms, teacher conferences, churches and media conventions. I do not claim to be the only one to recognize the messages in the show; others who have used the original Star Trek in American colleges and universities.

Newsweek tried to analyze the original series and came up with several conclusions that longtime fans already knew. “First, the series represented hope and reassurance about the future. There was also a realistic family feeling.” Special emphasis was given to the fact that the show contained “messages” and a final conclusion summed up why it retains international popularity: “It’s magic.”

In that first Star Trek series there is an element that first strikes the viewer in that each of the major characters has been created to represent things much deeper than what we were used to in the entertainment media. Roddenberry admits in the book The Making of Star Trek that in some cases he used names with the same deliberation of a Milton or a Dickens. Captain James T. Kirk (William Shatner) is representative of responsibility, honor, and duty. His first love is his ship, the U.S.S. Enterprise. With deep feeling in “The Ultimate Computer” he likened the Enterprise to the sailing ships of old, “…even if you take away the wind and the water, it’s still the same. The ship is yours…you can feel her…and the stars are still there.”

Very often Captain Kirk must bring together the very divergent philosophies represented by second in command Mr. Spock (Leonard Nimoy) and Dr. Leonard “Bones” McCoy (DeForrest Kelly). Spock was a model of logic and pure scientific reason, a character secretly tortured by having to suppress his more human side. He admits in “This Side of Paradise” that “Emotions are alien to me. I am a scientist.” McCoy summed up his differences with Spock in “The Ultimate Computer” when he says “Compassion, that’s the only thing no machine ever had. Maybe it’s the one thing that keeps men ahead of them.” While this contrast has meant a great deal in regard to putting humor in the series, it has been a major conflict that required Kirk to reconcile the two sides.

Fans of the show especially enjoyed the visiting of other planets and the mingling with other cultures. Here the writers used various plot lines to introduce concepts generally ignored by other television shows and often they were not very subtle about what they were doing. In “Let That Be Your Last Battlefield” there is a race war that destroys a planet. In numerous episodes there are examples of the evils of totalitarianism and big government, control by machines and apartheid.

My Star Trek program worked well in my government and history classes, particularly “Omega Glory” that was scripted by Gene Roddenberry himself. In this episode Kirk, Spock and McCoy are on an alternate world United States two hundred years after World War III. The villagers known as “Kohms” are the last of the Communist Chinese who had invaded America. A second group. the “Yangs,” are considered barbarians, living as the Native Americans once did and are about to destroy the last Kohm outpost. For them the phrase “Free-dohm” is a worship word. In the last act Kirk is challenged, with the lives of his crew in the balance, to explain the holy words from “the Greatest of Holies,” “Ee plebeesta nordor former pur fekteunum”. After a physical struggle with the story’s main villain, Kirk realizes what the words really mean and gives us all an excellent civics lesson.

Kirk informs the people “I did not understand the words because you say them badly…without meaning.” The Yangs are told the words were written “with a special pride never written before or since…in tall words proudly saying ‘We the people’ not for chiefs or kings, or warriors, or the rich or powerful…but for all the people.” Kirk proceeds to read what we now realize is the Preamble of the United States Constitution. We also realize the Yangs are no better than so many Americans today, those who blindly worship the

Star Trek came along when there was a growing hopelessness about the future. Our cities were on fire, our college campuses were riot scenes, the nation was more divided over a number of issues than ever before.Does this sound familiar? We have more division and hatred in our nation today than we did then.

The show talked to us about the issues we faced in a way no other TV series or film could do. Lives were influenced. Star Trek’s messages were strong,  I will not pretend that the shows writers and stars were conservatives, however I have to believe what C.S. Lewis once wrote about authors not always having full control over what they write. As a Christian I have to believe that there are times when God makes use of the media, even in the category some consider way out. This was certainly the belief of one of the stars of the original Star Trek, Grace Lee Whitney who portrayed Yeoman Janice Rand. Grace Lee, a personal friend of this writer, later became one of the founders of Point North Outreach, a Christian media organization.

Over the years I have heard of young people who were encouraged by the show to go into government service, social work, teaching and the arts.

We need such inspiration today in the entertainment media.

Sherlock Holmes and the Adventure of the New American President