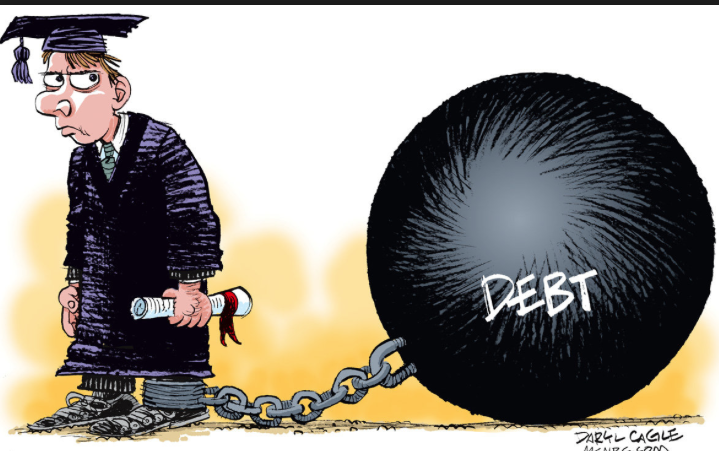 This week’s Politico Morning Education update brought me up short. It seems that HELP Committee Chairman Lamar Alexander (R-TN) has been pushing to make the application for Student Aid easier to access and complete.

If history is any indicator – which it usually is – student debt is destined to climb as more and more students and unwitting parents take advantage of the “simpler” process of heading full-tilt into more and more debt for an education that increasingly produces graduates (if the student is fortunate enough to graduate) that fail to find meaningful employment or find that their choice of discipline not matching up with the job market’s needs.

The discussion should include the repercussions of heading into entry-level positions, often not even in the same field the student trained for, saddled with as much as $100,000 in student debt to pay off. What many do not seem to grasp as they sign their life away is that sooner or later the debt becomes due and all those “unemployment deferments” and “hardship deferments” that put off the pain will come to an end. When they do, the reality often proves more than the student can handle and sometimes causes parents to pay off the debt and subsequently file bankruptcy to keep their own lives from being pulled down by the resulting debt.

Having amassed over $30K in student debt in the 1990s, I understand what that debt can do to someone just starting out. I found myself in a bad job market in my late 40s and saw no choice but to return to school. Unfortunately, being riffed from a high-paying position in an era of middle-management downsizing left me with little choice. It took years for me to recover and eventually pushed me into starting my own company at the age of 50 and working another 19 years before retiring at age 69 still paying off the debt.

Life has made me dig a bit deeper into how such things happen. What I have found makes me more determined than ever to point out the pit-falls in hopes that others might learn before falling in.

The major complaint I hear from parents and student alike is the overwhelming cost of a college education seems to accelerate with each passing year. Have you ever wondered why? Here are the facts:

Universities and colleges have no incentive to control costs if students and parents blindly believe that what makes the difference is the name on the Diploma rather than the quality of the content presented in the classrooms. They also have no incentive to cut costs because government continue to subsidize them through the issuance of funds through student grants and loans regardless of the financial ability to repay such loans.

None of those subsidies by the federal government are supportable under an originalist reading of the U.S. Constitution.

Here is what would happen if all student loans and grants were discontinued:

— Colleges would find themselves forced to make hard decisions about which courses were important enough to continue, how many staff would be furloughed, whether to build that monument of a library to honor some alumnus who wanted his name on a building but could not foot the bill for the whole cost of construction.

— Colleges would begin to focus on the important things…quality professors who earn their salaries rather than shift the mundane stuff off to two or three assistants paid for with the funds provided by student loans.

— Colleges would place more emphasis on learning rather than expanding their fiefdoms. Students learn just a well sitting on less expensive chairs and living with utilitarian furnishings in student dorms instead of apartment complexes funded at the colleges’ expense.

— Colleges would be forced to compete in the marketplace without the benefit of knowing that their customers are not shopping based on price, but rather on status symbols.

In a short time, the wheat would be separated from the chaff. Fat would be trimmed from the budgets and colleges would spend more time catering to their customers instead of catering to ideological faculty who use their classrooms to attack any viewpoint that is not in alignment with their personal beliefs. Some of those basket-weaving courses would likely be eliminated as well.

To prevent wild claims of unreasonableness and “fascism” on the part of those who are forced to live as the rest of us do, perhaps the most humane means to stop this insanity is to arrange a slow tightening of conditions for obtaining student loans. Tightening not only credit-worthiness on the part of the borrower, but tightening controls placed on institutions’ tuition increases and both salary expenditures and capital projects that escalate their budget needs. This could be accomplished over a period of five years after which loans and grants could be phased out – first for those who do not meet financial means testing requirements. Eventually, all such loans and grants would be discontinued.

As an example of what colleges could look like without the benefit of federal largess, we need only look to Michigan where Hillsdale College has, since its inception, shunned every cent of federally funded student loans and grants tossed at its feet. It is considered an exceptional example of a liberal arts educational institution that takes nothing from the federal government. In fact, they will not accept any student that depends on loans or grants in any way connected to the federal government. To do so, in the eyes of it’s board members would obligate them to kowtow to too many government requirements regarding reporting, privacy, etc.

Instead, Hillsdale substitutes private scholarships for students who apply to their school. Their institutional growth and success in producing well-educated and competent graduates is well established. In fact, in recent years, Hillsdale has begun funding free on-line (non-credit) courses to the public. Additionally, they have funded a very successful charter school initiative that is also setting high standards across the country in the K-12 systems. All without federal funding.

You see, it can be done without mountains of debt or federal interference in the marketplace. It is simply a matter of getting the federal government out of places where it has inserted its nose over the past 100 years or more but where their noses should never have been inserted in the first place.

Emery McClendon: Put Some Skin in the Game, But It's Not the Blame!