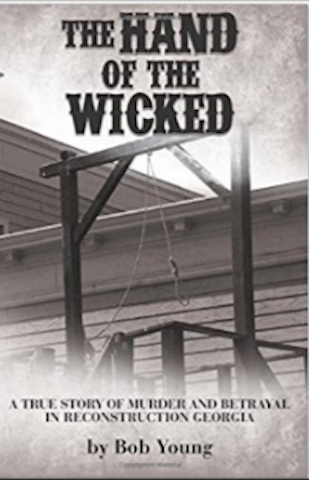 “She was someone who over time learned to use her words to fight against those things she thought were wrong…”.

Raytown resident Nellie West, may have been crippled from the continued abuse she received as a slave in Georgia, but she never allowed those scars to prevent her from fighting for her value to be free. The Hand of the Wicked details West’s murder and one investigative journalist’s fight to bring her story to the public and seek justice.

“The past…what’s there stays there” is the mindset of many in the South who fought hard to suppress the truth and often in the book worked hard to rewrite the events of the murder of Nellie West. As you read through the heart wrenching details of abuse by the hands of handler John Brown (known in the area as Cruel Brown), one can’t help but feel the anger swell in your heart as the tear streams down the cheek.

Southern politics strong arming lady justice with the combination of the end of the Civil War, the death of Abraham Lincoln and the desire to keep civil order in the South, help sway an appeal to President Andrew Johnson to change the course of justice for Nellie West’s murder. Bob Young’s account of justice sought and ultimately denied, Hand of the Wicked is a historical page turner, griping detail and an easy weekend read.

The book and others offered by the author are available HERE on Amazon.com.

Bob Young served as mayor of the City of Augusta, Ga. and senior executive in the administration of President George W. Bush. A retired award-winning broadcast journalist, Air Force and Vietnam War veteran; Young is a founding board member of the Conservation Leadership Council and a founding board member of the Georgia School for Innovation and the Classics. He is the author of The Treasure Train and a finalist for the Frank Yerby Award at the Augusta Literary Festival. The United Daughters of the Confederacy awarded Bob their Jefferson Davis Award for his work on Southern history.

Russian Collusion Story in Tatters. Plan B: Obstruction of Justice