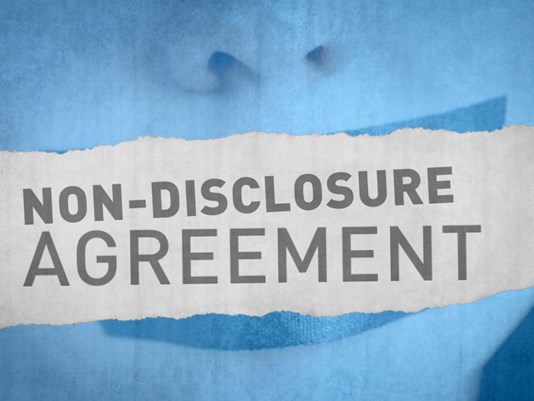 The Los Angeles Times has just posted a story about the infamous “NDA’s in Hollywood.  An NDA is a “non-disclosure agreement” and it has been around for at least the last thirty years, but probably much longer.  An NDA basically is a contract that a potential employee would sign which states a number of different items that the employee would have to agree to.  When lawsuits were becoming the norm in Hollywood most studios or companies would have you sign one of these documents if there was information that the studio didn’t want to leak out.  This was almost always in regards to script storylines that involved a “cliffhanger” or a story plot/idea or a reality show that didn’t want the winner or finalist’s to be revealed.

Now, we can see that “NDA’s” have taken things to a whole new level.  The decadent sewer that is today’s Hollywood is desperately trying to protect itself from any and all lawsuits and it is doing so by increasingly taking away a person’s freedom.  If a potential employee doesn’t want to sign these agreements, they won’t get the job.  If they do, they give up many of their rights to protest if they see, hear or experience abuses.

For instance, a typical NDA, like the one you would sign if you worked for Leonardo DiCaprio would state this:

“Confidential information, according to that document, includes information about the actor, his family and friends, his businesses and even ‘the existence of the contractor’s business and/or personal relationship with DiCaprio.’ The document goes on to say a long list of ‘offensive/inappropriate material’ is also confidential information. It states that contractors on a project “may acquire information or material of an explicit, graphic, offensive, sexual and/or inappropriate nature,” and be in situations where “as part of the creative process, conversations, jokes, banter and behavior may contain explicit references to sex, gender, race, sexual orientation, violence and other protected categories.”  So, in other words, things that would get a CEO fired at a “non-Hollywood” company would be perfectly acceptable in tinsel town.

These Hollywood companies always say that an NDA is just a formality and if you are “really harassed” then of course you can take legal action.  Not so fast.  As we saw with the Harvey Weinstein case, most of the women were intimidated or threatened if they spoke out and feared that their careers would suffer.

A former agency worker at United Talent Agency said she felt the disclaimer would make it pointless to sue or complain.

“Reading it, as a woman, I can see how it would be a disincentive for me to report any kind of sexual harassment,” said the former employee, who said she has not been the victim of harassment at work. “They could pull out this document and say, ‘You waived your right to complain about this type of behavior.’”

“Some confidentiality agreements detail the consequences for breaking them. The agreement for DiCaprio’s company states that contractors must pay the actor $250,000 if they violate the deal, while a ‘Shark Tank’ agreement called for a payment of $5 million, a sum the document calls ‘the fair average compensation for any harm’ that could result from a breach. A spokeswoman for MGM Television, which now produces “Shark Tank,” declined to comment on the document.

Obviously Hollywood runs scared that the real truth of what goes on behind closed doors is going to be revealed by the people who work for them.  They seem to me to be a bit paranoid and with good reason.  Other major corporations with sensitive information may have NDA’s that protect their products, but Hollywood seems to have NDA’s that protect their abusive behavior, foul language, bad behavior and secrets under the guise that “it is artistic creativity”.

Beware the De-Testosteronization of Men