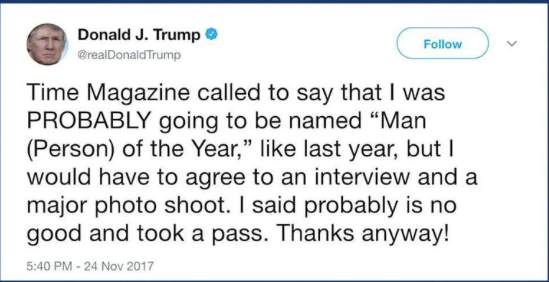 It’s the season when Time magazine picks their Person of the the Year. Normally I am oblivious to it but since Trump tweeted over the weekend that he would not accept it should he win (which drove the media batty), it made me curious. So I went to Time’s website and was surprised that I could actually participate in the voting! I had no idea. Of course Time can ignore the votes and pick their own – just in case the voters pick the “wrong” person. Can’t give the common man TOO much power after all.

Actually it doesn’t have to be a “person”. It can be groups (like “The Protestor” in 2011 or “The inheritor” in 1966). Or inanimate objects like “The Computer” in 1982. It can also be influence of the negative kind as well. Both Hitler and Stalin were winners of this award. See reward history here.

The voting is pretty simple. Once you launch the process each nominee pops up and you vote Yes or No. There are about 20 people listed.

Here are some names/objects that weren’t on the list but should have been (remember, they can be positive or negative influences):

The voting continues until December 3 and the winner will be announced December 6.

Minority Poverty: Is It All the Fault of “White Privilege?”

Anni Cyrus: Sharia Hunting the Survivor to the West