My esteemed wife gave me my first motorcycle as a 40th wedding anniversary gift. I never rode one before that; I fell in love with it. I traded up a few times and now, ten years later, I ride a Harley Davidson Road Glide, a big, honkin’ touring bike and I love everything about it. Much of what I love about it is what can be termed the “biker culture.” Most people who ride Harleys are in their 50s and older. We may look rather disreputable, grizzled and unwholesome (who showers and shaves before going out on a ride?), but I have found the vast majority of those whom I have met to be wonderful people. Many are veterans who are unabashedly proud of their service and of this country. They are decent people with decent values and decent intentions — which is why I was so disturbed by a recent experience.

A few weeks ago, I took a ride on my Harley to Myrtle Beach to attend Bike Week. I wanted to see what was on offer from the vendors who frequent these expositions. The last one that I attended, Americade in Upstate New York, had hundreds of vendors who were selling all sorts of wonderful bike related items at great prices. However, the vendors at Myrtle Beach Bike Week, for the most part, were just selling t-shirts and cheap leather vests.

There were also a lot of sellers of “biker jewelry.” I took a look at some of the stuff and came away appalled. Many (not all) of the jewelry vendors were selling items (rings, necklaces, etc.) containing swastikas! I was taken aback and felt truly uncomfortable. Most of the bikers whom I know might look tough and disreputable, but they are really people of great moral strength and with deep love for America. So, I wondered, who is buying this? As I said, I was uncomfortable.

Then, I realized that it was not I who didn’t belong there, it was THEY. My anger began to overwhelm my unease. I refused to permit these lowlifes to cause me to lower my head and be cowed. The kind of people who sell and buy swastikas are vile and stupid. I am a proud, unflinching American. These bastards are garbage. It is they who don’t deserve this country, not me. It is they who need to be made to feel uncomfortable, not me.

This miserable confrontation with unpleasant reality has stuck in my mind since then. What sick impulse would cause anyone to wear such vile symbols of evil? Those who wear this “jewelry” are cut from the same cloth as the morons who wear Che Guevara t-shirts, only worse. The Che Guevara wearers are for the most part young, stupid and naive. The swastika wearers should know better. They have the experience of age, but it seems they are still stupid and naive. I was appalled — and not only because I am a Jew. Any decent American should share my revulsion. How many Americans soldiers, the members of “the greatest generation,” were killed by those who wore this symbol of evil? How could anyone who loves this country be ready to wear such a symbol as an adornment?

It seems that pure evil, like any other commodity, has a shelf life. The further away in time from it, the lower its impact. The horror is replaced by something else. It becomes a symbol of rebellion. Those who feel alienated by conventional society look for a way of demonstrating their contempt for civilized behavior. So, they put on a ring embossed with a swastika, or a head rag imprinted with a death’s head and they parade around on Sundays pretending that they are tough, before going to work on Monday swastikaless and conventional. It costs them nothing but the $15 or $20 that they spent for the ring and they get to demonstrate their rebelliousness to all and sundry. Most of these tough guys have little or no understanding of what actually happened under these symbols of evil. This is where “fake news” plays a role.

“News” used to be the impartation of information. It has been replaced by the impartation of “fake news,” the spreading of disinformation, which is a polite euphemism for lies. How does it fit in here? Disinformation serves to dilute the impact of horrible truths. If anyone and everyone is called a “Nazi,” then the term “Nazi” loses its power to describe pure, unalloyed evil. If a police action to prevent or stop a riot is described as “Gestapo tactics,” then the tactics of the real Gestapo lose their power to horrify. If swastikas are used as an indicator of a weekend rebel, then the swastika serves the same function as a mini coke spoon or razor blade on a silver chain. It becomes nothing more than a marker of someone who is trying to show his defiance in the manner of a clueless high school sophomore. 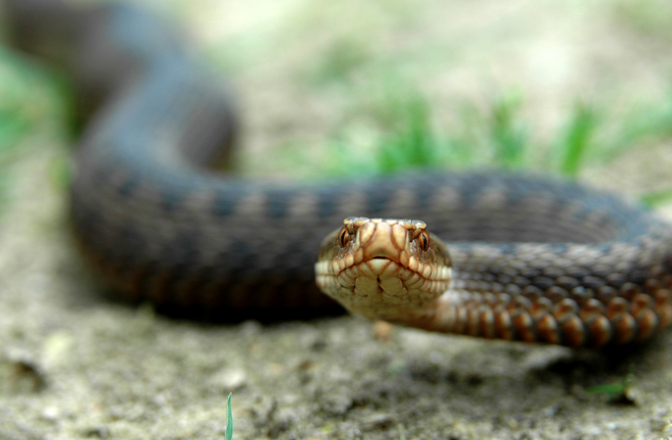 Ironically, the use of “fake news” and propaganda was perfected by the real swastika wearers — the National Socialists — the Nazis. The Nazi propaganda genius, Josef Goebbels, succeeded in reducing the Jews to a status below humans, thus diluting the impact of the evil that they were doing. But as it turns out, “fake news” is not new at all. Since the dawn of creation there has been fake news. When the serpent delivered fake news to Eve in the Garden of Eden, she swallowed it, quite literally, only to regret her naiveté for an eternity. The serpent distorted and misrepresented the word of G-d and Adam and Eve bought its story without question. Genesis three describes how the serpent, when he was cajoling Eve to eat of the fruit of the forbidden tree, told her that if she ate it she would “surely not die.” Fake news!

The morally bankrupt slugs who sell swastikas and the morons who buy them are responsible for the dilution of evil that is the effect of every one of these symbols when they are sold and worn. Every person, organization, news organ, political party, community leader or professor who calls an American or Israeli soldier a “Nazi,” or labels a cop a “storm trooper,” bears responsibility for diluting the horrific connotation of those words. Every one of us who hears this “fake news” should assume the responsibility of treating it with the contempt that it deserves. The next time that you hear the president of the United States described as “Hitler,” don’t accept it with equanimity. Doing so not only unforgivably defames the president, but it dilutes the truth about the wicked depravity that Hitler embodied.

If we don’t stand up against “fake news,” we are doing the serpent’s work. We need to remember the serpent’s punishment: “upon thy belly shalt thou go and dust shalt thou eat all the days of thy life.”