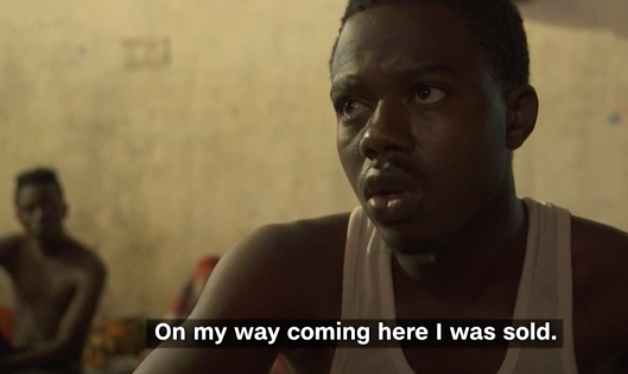 Not a used car, a piece of land, or an item of furniture. Not “merchandise” at all, but two human beings.

One of the unidentified men being sold in the grainy cell phone video obtained by CNN is Nigerian. He appears to be in his twenties and is wearing a pale shirt and sweatpants.

He has been offered up for sale as one of a group of “big strong boys for farm work,” according to the auctioneer, who remains off camera. Only his hand — resting proprietorially on the man’s shoulder — is visible in the brief clip.

After seeing footage of this slave auction, CNN worked to verify its authenticity and traveled to Libya to investigate further.

Carrying concealed cameras into a property outside the capital of Tripoli last month, we witness a dozen people go “under the hammer” in the space of six or seven minutes.

“Does anybody need a digger? This is a digger, a big strong man, he’ll dig,” the salesman, dressed in camouflage gear, says. “What am I bid, what am I bid?”

After the auction, we met two of the men who had been sold. They were so traumatized by what they’d been through that they could not speak, and so scared that they were suspicious of everyone they met.

Each year, tens of thousands of people pour across Libya’s borders. They’re refugees fleeing conflict or economic migrants in search of better opportunities in Europe.

Most have sold everything they own to finance the journey through Libya to the coast and the gateway to the Mediterranean.

But a recent clampdown by the Libyan coastguard means fewer boats are making it out to sea, leaving the smugglers with a backlog of would-be passengers on their hands.

So the smugglers become masters, the migrants and refugees become slaves.