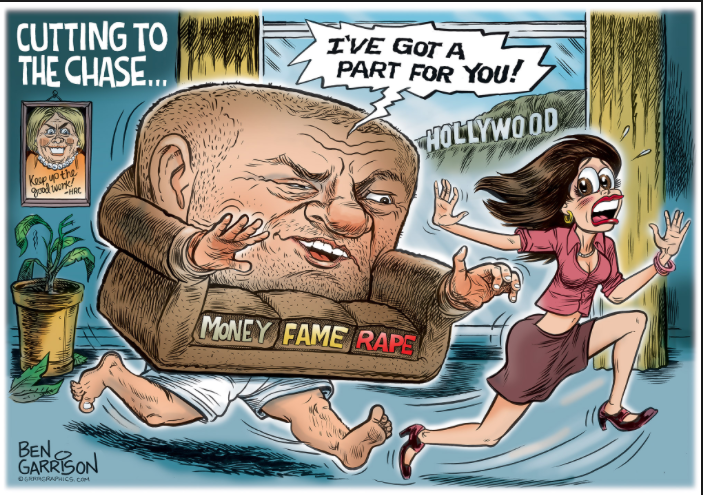 Let’s preface by stating the obvious.

YES, men like Miramax producer Harvey Weinstein and director James Toback, and anyone who proven to be predators are absolute monsters. (I’d call them ‘pigs’ but that’s an insult to pigs.)

YES, there are thousands of other Weinstein-types lined up behind Harvey in every Power Industry, abusing their positions and wielding sex as a weapon.

YES, the Casting Couch exists in every Power Industry in the world, and it has existed since the caveman days when “Caveman Ugh” held all of the power in his cave.

All that being said, just like the gun which only has “evil powers” when placed in the hands of evil people, the problem in Hollywood & beyond isn’t simply about eliminating the Casting Couch. That thing will always be an evil, tempting tool of the devil. The problem lies with the women and men who are willing to sell their souls to VOLUNTARILY lie on that Couch in order to get what they desire.

When I was a young actress in Hollywood I encountered lots of “important” perverts—men who claimed they could make me a star if I did what they asked. Perhaps because of my Christian upbringing and/or  East Texas scrappiness, I was able to clearly see the predators for who and what they really were. It’s much easier to laugh and walk away from perverts when you have strong, unbending morals and self-pride. I was never mesmerized by their success, and I was never so desperate for acting gigs that I’d do anything to get them. But boy did I know a lot of women who did. And I’m not just talking about show business; throughout my life I’ve known women and men in ‘regular jobs’—in retail, the restaurant industry, non-acting aspects of the entertainment industry—who would submit just as readily to Power Brokers in hopes of getting better hours, raises, promotions…doing anything/everything to achieve their goals.

I’ve written before that even in the political commentary world a new version of the Casting Couch exists. I’ve seen the incredibly low levels some women and men have gone to be on television, paid or not. A few years ago I was told about a ‘secret video’ featuring a (married) pundit having sex with a (married) news anchor, as taken by the pundit’s jealous radio star ex-boyfriend. Another time I was told by an ambitious political commentator that she’d ‘gotten permission’ from her husband to go “right up to the line sexually” if it meant advancing her career. (I was too stunned to ask where ‘the line’ actually was…) And just like Hollywood, there are reverse-versions of the Casting Couch in the political world where women will use their bodies to get a job and then threaten their ‘victims’ with RAPE if they don’t get it.

It’s dirty, it’s disgusting, but again this garbage has been happening since the beginning of time.

In the case of Weinstein, his M.O. was to hold auditions in his hotel room and ask for (or offer to give) a “massage”. If the actress said no, supposedly Weinstein either wouldn’t cast her or threatened to ruin her career. Many actresses now claim their careers tanked because they turned him down; others claim they turned him down yet somehow went on to star in many of his films.

My questions to the actresses who knew this was happening yet went to his hotel room anyway: 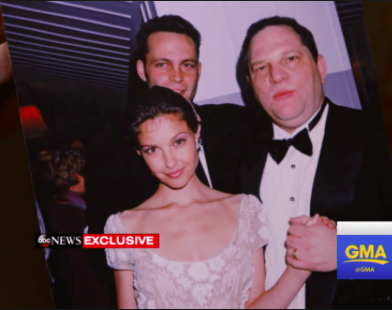 Ashley Judd, who starred in two Weinstein films, says she fended him off by “promising to have sex with him if she won an Oscar”. (Then again, Judd basically accused President Trump of being a rapist, and recently made a psychotic video rant about a TSA agent who dared to compliment her…so who knows what really happened with Harvey…) Mira Sorvino starred in several Weinstein films, despite claiming she didn’t submit to his sexual advances. Gwyneth Paltrow, who said she was “only a kid” (age 22) when Weinstein tried to coax her onto his Couch. Paltrow, too, claims she didn’t have sex with him, and yet she somehow managed to get the lead in the film she auditioned for (in his hotel room) and then became known as ‘The First Lady of Miramax’ starring in many Weinstein films. This led to many rumors at the time about Paltrow’s “relationship” with Weinstein–but eh, who knows? (By the way, you’d think Paltrow’s famous Hollywood parents might’ve warned their actress daughter about auditioning in a well-known pervert’s hotel room… but I digress.)

So what’s the solution to the temptations found on the Casting Couches of the world? Church. Find Jesus. Learn self-respect, and then teach it to your children. That’s the only way many will ever be saved.

Another solution would be to simply JUST SAY NO, and/or GO TO THE MEDIA ABOUT THE PERVERTS OF THE WORLD! No acting job, or any job, or any promise of anything monetary/worldly, is worth the cost of losing all you are.

Sadly most won’t do either of the above and that Couch and its Monsters will go on and on throughout infinity. Because as long as there’s a chance for money or power or fame and success, and men who are willing to give it in exchange for sex, there will always be desperate people willing to pay the price.