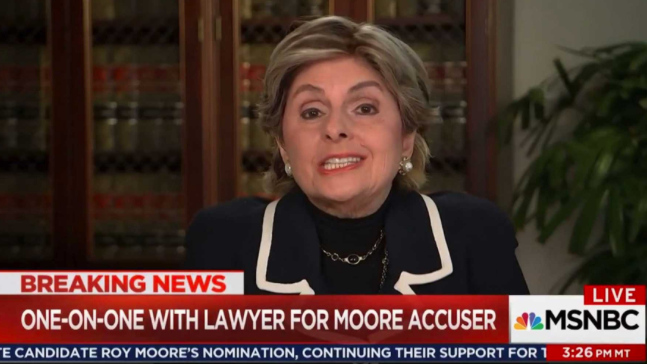 As I wrote about a few days ago, Gloria Allred’s involvement with Beverly Young Nelson makes me doubt the veracity of the accusations against Roy Moore. Her appearance on MSNBC further solidified that assessment. In a random act of journalism, MSNBC actually asked Allred some pertinent questions and it did not go well. The video is here, where you can see her stutter and stammer through the interview.

Below is a portion of the questions from Katy Tur specifically about the yearbook and Allred’s responses, compared to what was stated earlier this week by Beverly Young Nelson:

Tur: Does your client, Beverly Young Nelson, remember him signing it?

Allred: She remembers — well, she remembers being with him. It was on the counter. She alleges that he took it, that he signed it and she was thrilled that he had signed it, because, as far as she knew, he was a D.A. and that was an important position.

Beverly Nelson: I happened to bring my yearbook to work with me to the restaurant on December 22, 1977. I put it down at the end of the counter. Mr. Moore happened to notice it and asked if he could write in your yearbook. I felt flattered and I said “yes”.

Allred: I don’t believe at the time she had a clue whether he was an assistant D.A. or a D.A., but he signed it, she took it. As far as she knows, I mean, there’s no reason for her to think it’s anybody’s but his signature.

Beverly Nelson: I took the yearbook home with me at the end of my shift that day. I felt honored that Mr. Moore, who was such an important person, would write in my yearbook.  I trusted Mr. Moore. He was the District attorney.  He then looked at me and said, “you are a child. I am the District attorney of Etiwah County. If you tell anyone about this, no one will believe you.”

Doesn’t sound like their was any doubt in her mind whether he was D.A. or not.

Allred:  You know, I don’t — I haven’t asked her if she saw him, but we did describe what happened that evening in question. What she alleges was that she put it on the counter; that I think she asked to sign — or that he did sign it. That’s all.

Beverly Nelson: I put it down at the end of the counter. Mr. Moore happened to notice it and asked if he could write in your yearbook. I felt flattered and I said “yes”.

Allred: Well, why would — you know, why does anybody doubt that it is his signature?

Maybe because you can’t answer a simple question?

Those last 2 questions are excellent because it gets to the bottom line of it all – did Roy Moore sign the yearbook. And Gloria Allred can’t even verify that she saw him sign it! And she obviously did not pay attention to the answers her client gave at the press conference on November 13. Gloria Allred’s answers are very telling and indicate sloppy work in getting the story right. Of course, if it’s not true then that may be a good reason why.

I am sure Gloria Allred did not expect this kind of questioning from MSNBC. Her appearance was a train wreck. I don’t watch MSNBC and don’t know Katy Tur but she did a good job and Allred should have been ready for any questions as a good lawyer would for their client.

If anyone had doubts about this allegation before, they now have good reason for it, especially the voters of Alabama.