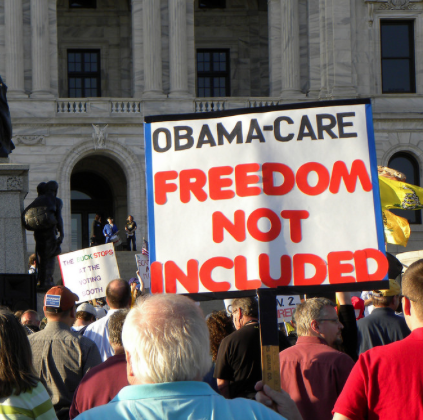 Barack Obama, the New Democrat Party, and other progressive Marxists designed Obamacare as a series of income redistribution and social justice programs administered by an all-powerful federal government. It destroyed jobs and devastated the finest healthcare system anywhere in the world. Naturally, like all collectivist ideas, the entire scheme is collapsing faster than money can be printed to pay the bills.

Increasingly, doctors find themselves relegated to paper pushing for government bureaucrats, while nurses of varying skills attend patients. Actually seeing a doctor is becoming a rare occurrence, especially for physical exams. Personal or family physicians usually cannot attend to patients requiring hospitalization; rather “hospitalists” having no individual knowledge about a patient, assume the role of the primary-care physician. Likewise, patients have no knowledge or trust in the mandated hospital-assigned caretaker.

Doctors find it increasingly more difficult to survive with the substandard payments allowed by the government, thus, they must spend less time with, and see more patients to survive.

Finding a specialist is, likewise, increasingly more difficult, and at times requires extensive travel. Waiting times can now run into months, not weeks.

Obamacare is the greatest medical crisis in this nation’s history. It is a classic study in failure of Marxism, and the pain and suffering people must endure when we allow leftists to implement their evil, collectivist schemes. Left unchecked, it will literally cost untold thousands of American lives.

When politicians can convince nearly half of America that they can provide full medical care for everyone, including illegal aliens and their unlimited families, at lower cost without reducing quality, it is solid evidence that years of indoctrination by the government has paid big dividends for tyrants.

The betrayal of Americans began with the big lie, “Affordable Health Care Act.” It continued with Marxist Obama’s blatant, repeated lies, “If you like your healthcare plan, you can keep your plan; if you like your doctor, you can keep your doctor.” To hear more of the dozens of lies from Barack Obama on Health Care, follow the links at the end of this article. After passage, architects of this atrocity admitted they had to lie repeatedly, or it would never have been enacted.

Democrats revealed their pernicious contempt for the American people when they alone voted and passed this granddaddy of all Marxist coups on a nation crying no, no, no!

Obama and the Democrats lied with impunity and without remorse; now the Republicans in the house and senate exhibit their deceitful scheme of campaigning on a platform of Obamacare repeal and reject all opportunities to do so when they control congress and have an anti-Obamacare president in the white house.

Tyranny comes in many forms and from varied sources. However, when it comes from elected officials whom we place in congress to correct specific wrongs, it is indefensible. We expect the New Democrat Party to do what it does; their ideas are those espoused by Karl Marx. Republicans, conversely, are supposedly free-wheeling, capitalists, and dedicated to the principle of small government. Missing in this equation are inner-political maneuvering and establishment-Republicans’ vitriol towards President Donald Trump. These are hardcore, uncompromising Republicans more aligned to the Democrat Party than to conservative ideology. Maintaining the establishment’s power and demonizing President Trump are more important to these party traitors than the welfare of American citizens.

It’s now up to the voters to hold Republicans to their promises on Obamacare or target them for removal from their entrenched seats of power.

Obama Lies 16 times in under 3 minutes on ObamaCare: