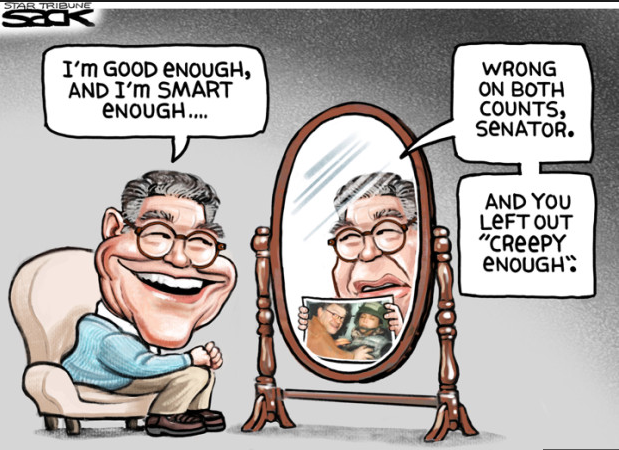 The sexual allegations have continued coming this week. More women have come out with accusations against Al Franken and then Charlie Rose (among others), who has been fired by both CBS and PBS. Both have issued statements:

“I’ve met tens of thousands of people and taken thousands of photographs, often in crowded and chaotic situations,” Franken said in the statement, per the Associated Press. “I’m a warm person; I hug people. I’ve learned from recent stories that in some of those encounters, I crossed a line for some women — and I know that any number is too many. Some women have found my greetings or embraces for a hug or photo inappropriate, and I respect their feelings about that … I’ve thought a lot in recent days about how that could happen, and recognize that I need to be much more careful and sensitive in these situations. I feel terribly that I’ve made some women feel badly and for that I am so sorry, and I want to make sure that never happens again. And let me say again to Minnesotans that I’m sorry for putting them through this and I’m committed to regaining their trust.”

Of course he completely avoids the actual accusations against him. And they were about much more than simple hugging as the picture on the plane clearly shows. And how do you not know that you have crossed the line?

“I am greatly embarrassed. I have behaved insensitively at times, and I accept responsibility for that, though I do not believe that all of these allegations are accurate,” he said. “I always felt that I pursued shared feelings though I now realize that I was mistaken.”

“I learned a great deal as a result of these events, and I hope others will too. All of us, including me, are coming to a newer and deeper recognition of the pain caused by conduct in the past, and have come to a profound new respect for women and their lives.”

Shared feelings? Please. Btw not ALL of us are guilty of this type of behavior or have caused this type of pain. And most of us have respect for women and their lives. He is trying to diffuse his guilt by blanketing everybody in it.

Kathy Griffin was also back in the news this week. You know, the one that thought it was funny to do a skit with a severed head of Trump. And yes she’s still playing the victim. While on tour in Europe doing her “Laugh your head off” tour (very clever play on words there), she took some time to post a “Kathy Griffin State of the Union” video. Did I miss something and she was installed as President? In this video she whines and moans about being blacklisted in America and not being able to get any TV gigs anymore. Well, boo hoo hoo.

“I just want you guys to know I’m fully in the middle of a blacklist,” Griffin said. “I am in the middle of a Hollywood blacklist. It is real. I am not booked on any talk shows…When I get home I do not have one single day of paid work in front of me,” she added.

Funny how Kathy wants the freedom to express her first amendment rights but when others do the same by not booking her then she cries foul.

Kathy further opined, “I know I took a picture that offended a lot of people, but this wall of crap has never fallen on any woman in the history of America like it has on me.”

The history of America? This is just laughable. I think Rosa Parks would have something to say about that. And so would Mary Jo Kopechne but unfortunately she is unable to comment. Neither can Sharon Tate. And politically I think Sara Palin would disagree with your there Kathy considering that in addition to all the fake news and attacks on her, someone once attempted to burn down her church. Get a grip!

I will give Kathy one positive though. Unlike all the other celebrities who promised to leave the country if Trump was elected, at least you did. Bravo!

About a year ago I read Mike Love’s book “Good Vibrations: My life as a Beach Boy”. Until then I did not know that Manson had a goal of being a pop star and was friends with Dennis Wilson and producer Terry Melcher. Manson had auditioned for Melcher but was not signed. Not long after that both Wilson and Melcher severed their connection to Manson. Some speculate that Manson targeted 10050 Cielo Drive on August 9, 1969 to get revenge on Melcher (who had previously lived in the house but had moved). Whether Manson was aware he had moved or not this was a horrifically evil man who is now facing the ultimate justice for his actions.

There were plenty of articles about Charles Manson and his “family” the last week. But the most ridiculous goes to Baynard Woods at the NY times. Mr. Woods argues that Manson was what we would call the “alt-right” today:

Mr. Manson was not the end point of the counterculture. If anything, he was a backlash against the civil rights movement and a harbinger of white supremacist race warriors like Dylann Roof, the lunatic fringe of the alt-right.

One problem. The “backlash against the civil rights movement” was from the left in the Democrat party. Mr. Woods probably has no idea about this because he’s been taught that slavery/segregation/racism is all on the right which is a total lie. The Democrats in the south opposed the civil rights movement and going all the way back to 1866! Yes, civil rights legislation was passed by the heavily Republican controlled Congress a year after the civil war. In fact, the KKK grew out of the opposition to it and became the method by which the Southern Democrats prevented it from being implemented.

Mr. Woods also says that Manson was trying to incite a race war with the killings. As far as I know, none of the victims were black. How do you start a race war that way? It is amazing what the left will do to try and uphold their false template that all Republicans and conservatives are racist.

Finally, Hillary Clinton once again demonstrated her total lack of knowledge in anything tech related in the following statement: “He (Bill) didn’t tweet about it, he went to work about it, and he actually got things done,”

Could someone please tell her that Twitter didn’t exist until 2006! And even if it did, I’m not so sure Bill would have had time because of…well…see first news item above.

Hillary also said this of Trump, “Between tweeting and golfing, how does he get anything done? I don’t understand it. Maybe that’s the whole point.”

I don’t know. The economy is doing well, unemployment is down, we have a conservative on the SCTOUS. If you ask me Trump is getting a LOT done while playing golf and tweeting.