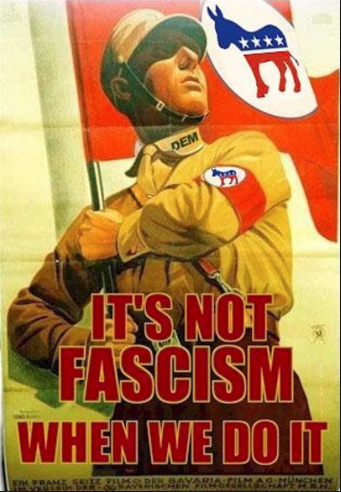 If one were to think of MSM as a single powerful wealthy individual, there is little doubt in my mind that their personal yacht would be named ‘Spirit of McCarthy.’ It would be the perfect name but not for the reasons you might think. The term ‘McCarthyism’ entered the American lexicon as a result of Republican Senator Joseph McCarthy’s efforts to identify and remove Communists from the U.S. Government in the 1950’s. The most prevalent historical accounts of McCarthy depict him as a man who recklessly leveled unsubstantiated and unfounded allegations at innocent people…ruining their lives and reputations for no good reason other than serving his own political ambitions.

The irony is that it is MSM, not McCarthy himself, who has always been the greatest master of McCarthyism. Most news stories today are based on conjecture, not fact. History depicts McCarthy as a villain. My grade school history book depicted him as such and that is the prevailing view. It’s fascinating when you think about it though: How many of us bother to read about McCarthy? How many people take the time to investigate the allegations against him? Of all people isn’t it amazing to think that the vast majority accept without question that McCarthy was evil? It’s an epic paradox: We assume the so-called inventor of false, malicious, and fraudulent public accusations was himself a bad person without scrutinizing the facts of the man’s life and career.

In actuality, McCarthy did identify real Communists that were ultimately dismissed for cause from their government jobs. He was in fact pursuing a legitimate issue and believed in due process. The reason why history has painted a distorted portrait of the man is because he went against the leftist establishment. After all, the Democrats controlled the White House for 20 years before Eisenhower took office in 1953. If he were serving in the Senate today, McCarthy would likely go after Obama, the Clintons, and the Democrat Party….and he would be just as vilified by MSM as he was in the 1950’s.

In many ways, the political climate of the 2010’s rivals that of the 1950’s. Accusations of collusion with the Russians is commonplace and the number of leftists in the federal government is probably at an all-time high after 8 years of Obama. I’m fine with criticizing Trump and the Republican Party, but only if Obama, the Clintons, and the Democrats are held to the same level of accountability. As it stands, anything and everything negative about Trump, whether it’s true or not is being reported as fact. It begs the question: Are we evolving into a society of guilty until proven innocent?

The latest trend in MSM is the reporting of sexual misconduct claims against public figures. To some degree it feels as though they are so frustrated by Trump continuing to serve as President, that leftists are turning on themselves. Perhaps. However, I am extremely worried about the precedents being established and the potential power that can be derived from this type of reporting.

Accusations of sexual assault are very serious matter. Personally, I believe rapists and pedophiles have a special place in hell. Like many people, I have a loved one who is a victim. I believe sex crimes are just as heinous as murder. The victims of such crimes may not lose their lives, but they have to live with the trauma for the rest of their lives. Each victim handles it differently. Some better than others. My heart goes out to anyone who has had to suffer through such a horrific ordeal as well as their families. Without question, sexual misconduct is a serious and widespread problem and it does need to be addressed in public. One victim is one too many.

Sadly, most of these crimes aren’t reported because they are very hard to prove. If someone is prosecuted for such a crime, the victim’s life is often put on trial in the court proceedings. The victim also has to worry about the negative fallout if their attacker isn’t convicted. As a result, it takes a tremendous amount of courage for victims of such crimes to come forward. It’s completely understandable why some people would wait years or even decades before coming forward. For some, it takes time to work up the courage, for others it’s a matter of protecting others from being victimized.

Sexual assault crimes are so repugnant that they evoke strong emotions in decent people. So, much so that it becomes easy to lose sight of the larger picture. The thought of an actual victim being treated as the villain is hard to accept. Therefore it’s easy to view the situation from the standpoint of: Its better to believe a false accuser than to deny emotional support to an actual victim. However, while not perfect, our justice system is based on innocent until proven guilty. Fundamental to this principle is the concept that the worst mistake our justice system can make is convicting an innocent person. There must always be due process. Absent that, we would live in a society where any person could be accused of virtually any crime. If we operated on a guilty until proven innocent principle, we could be jailed for any crime we can’t prove we didn’t commit, which entails a lot of things.

The MSM seems to be taking on the role of judge, jury, and executioner. A growing list of public figures are being accused of sexual misconduct. That’s disconcerting enough, but even more disturbing is that the allegations are being treated as fact. It’s McCarthyism at its worst. Once someone is accused of such a crime in the press, many assume they are guilty. The press has no qualms about detailed victim accounts. It’s is a very sharp double-edged sword.

In the case of Kevin Spacey, his words and actions tend to prove his guilt. Fine. Assuming he is guilty, he got what he deserved. His career and reputation are in ruins, but how about the case of George Takei? A male model has accused Takei of drugging his drink and attempting to sexually assault him…back in 1981. The only proof the accuser has offered is friends who confirm he has mentioned the incident to them…which is heresay…which is not admissible into court. Takei, who is openly gay has vehemently denied the allegations..pointing out such behavior is completely inconsistent with his personality. Assume Takei is innocent of the allegations. It means that an innocent man is seeing his name ruined in the press and he is having to address something that never happened. That is terrifying and deeply disturbing. To me, that story should only be reported as news if Takei is arrested and charged, otherwise it’s a non-issue.  I find this entire trend in news reporting disturbing for multiple reasons.

First, what about people who have been sexually assaulted by non-public figures? Are the victims of the famous somehow entitled to a higher level of justice? It would be nice if every sexual assault victim, especially children, had such a voice. Second, when did slander become legal? If it hasn’t already happened, innocent people will eventually be accused. MSM often provides detailed accounts of the accusations leveled against public figures. Who is substantiating these accounts? What kind of proof could be offered as incontrovertible evidence for something that happened decades ago? Also, why is every accusation seemingly treated as fact? Shouldn’t courts be the ones making such determinations and only after a fair trial?

Finally, who delegated MSM the right to announce punishment? I have no idea whether Alabama Senate candidate Roy Moore is guilty or not, but for the sake of argument let’s assume he is innocent. I have seen numerous articles declaring he should step out of the race. Why? He hasn’t even been indicted for anything, much less put on trial. What? Merely the fact someone accused you of something disqualifies you from running for elected office? Is that all it takes to derail someone? Where is due process?

The reality is this: MSM doesn’t care about justice, either social or legal. They do care about power and it is not only easy, but quite effective to discredit someone merely by printing allegations.

And until Bill Clinton is held accountable by the press, this entire crusade is nothing but a sham.

Jamie Glazov: Linda Sarsour, You Need to Apologize for the Halloween Massacre