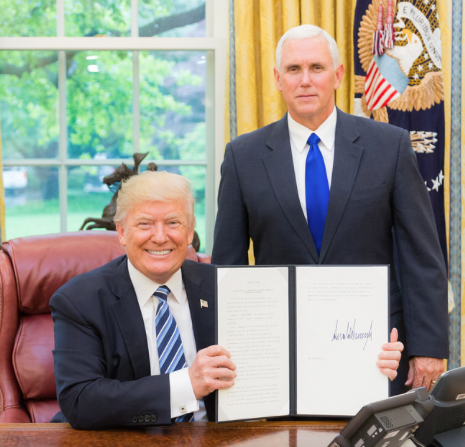 For anyone who is confused, in denial, or still pouting over the winner of our 2016 Presidential election, rest assured the Trump/Pence ticket knows exactly what they are doing. Despite the non-ending onslaught from the media driven left about how our President does not understand his job, the truth is he understands it very well. Even with the Democrats enormous temper tantrum to the likes of which history has never seen and even with the unprecedented jealous Republicans who are unable to contain their personal agenda, President Trump is succeeding. He is moving ahead with what the country has been in dire need of, ever since President Reagan returned to the private life of a citizen and that is common sense and the nerve to push back against nonsense.

Yes, the Push Back Boys are in charge on Pennsylvania avenue and it is rocking DC to its core. You see, the real people who work hard to keep the American wheel rolling are disgusted with Capitol Hill and promises never kept, illogical legislation that they pass, and their continual waste of our taxpayer dollars. Liberalism coupled with Hollywood’s wealth of opportunity and exposure and the relentless Democratic collusion with the Media has regular Joes fed up to their eyeballs in disgust.

The first Tuesday in November of 2016 Conservatives, Republicans, Independents, Liberals, and people who had never voted before went to their polling place with bells on to vote in a businessman not a politician, to lead this country. I know of one man, my dentist’s husband, who had never voted before because he said he was waiting for Donald Trump to run. No President from any position of the political spectrum is ever going to win favor with all Americans because of our natural divide. But one thing is very clear.

Mainstream America is now in charge. Unfortunately, as a collective whole Americans did not resist the creeping of moral decay brought to us by the left in this country. Along the way Liberals decided that the innate moral compass of ‘right and wrong’ was now reduced to a politician’s opinion on the campaign trail.   Decent people have always been here shaking their heads at the lunacy Democrats obnoxiously demand to be accepted into law, but now they can do more. Because now we have leaders who will not only back up the majority but lead the way, and most important of all Trump and Pence are telling the left, “No.”

For as long as I can remember there has been zero resistance to the political bullying by mean Liberal fools, and I do mean fools. History has it that intellectual debate is not even possible with a Liberal. Trust me. Just try it with any subject and they have two strategies when a conservative makes an uncomplicated rational point. The Liberal will foam at the mouth with ugly slanderous name calling and then rapidly switch the subject.  Some things never change. It is one thing that the Liberal fiscal model cannot sustain itself, but their morals and behavior is surely another.

Trump and Pence represent conservatism which is simple traditional values and self-responsibility. They do not believe in the Democratic platform of liberal emotional drama, subsidies, wasting money and they are pushing back. Like it or not the President and his twitter feed are bringing honest communication to the republic of the people and by the people.

We cannot change the deep groves of liberal legislation overnight but we no longer have to listen to the coastal elite, DC snobs, the pathetic media, the vulgar and morally bankrupt group of rich vulgar Hollywood types (did I say vulgar twice? I meant to.), or the idiot collegiate types who are enamored with self-identifying brilliancy and their cutting-edge ideas like, 1 plus 1 does not necessarily have to equal 2. And how about their brilliant attempt to neuter society, rearrange our vocabulary, and take God out of our faith based institutions. But the real people of this country are no longer going to continue to vote in establishment Representatives that do not keep their word, sit back and say nothing and do nothing to fight against the immoral and illogical Liberals. Politicians are no longer trusted because their reputation precedes them. Trump and Pence have excellent judgement but also the strength to stand up and push back against this crap, for lack of a better word that Liberals have been shoving down our throats for decades on end.

For instance, when Vice President Pence and his lovely wife, Karen, went to the NFL game between the Indianapolis Colts and the San Francisco 49ers and players took to their knees instead of standing in respect of the United States flag and her anthem the Pence’s did not stay and watch. They left. They simply left the stadium. There was no liberal drama. They not hold up a sign they did not cause a scene. They were not vulgar or inappropriate in any way. When the gentle VP and his wife walked out of the venue they were pushing back to the notion that respect for the Star-Spangled Banner can be compromised because for conservatives it cannot. No matter what the media tries to sell you.

For liberals, life needs to be convoluted and laced with drama so of course they interpreted the Pence’s quick exit as a political stunt. Yeah sure. That is right. Mike and Karen Pence look like sneaky manipulating types, don’t they? I bet they were planning and plotting this underhanded political stunt for weeks. Gotta keep a sharp eye on that shady Pence couple for sure because they are trouble on wheels everywhere they go. Oh Please! Liberal logic has normal people reaching for an air-sick bag every time.

Despite the hatchet job liberals like to take to the English language words do have meaning. conservatives by the mere definition alone are the opposite of liberals but there can never be any intellectual pursuit to persuade Democrats because they are all about dividing. They perpetuate hate and discrimination. They blame others while creating chaos and pitting people against one another. Whereas Republicans are the party of good sense, good manners, raising children and families, patriotism, and faith based institutions. The GOP believes in self-responsibility and simple traditions. Republicans, yes Republicans are the ones that are color blind and respect life across the spectrum from womb to grave and appreciate the uniqueness and the privacy of individuals.

As time ticks forward the loud and obnoxious minority in this country has bullied the Average Joe for far too long but we needed a leader (evidently not a politician) that was able to rock the boat on Capitol Hill because status quo is way, not good enough. And despite Liberals and the most shameful Republicans who publicly and privately are roadblocking the President, Trump is dismantling the socialist legislation passed into law under President Barack H. Obama’s tenure like no more subsidizing private insurance companies. It is flat out against the law for the federal government to subsidize in this regard and no one stopped him. The insurance underwriters knew very well that this was unconstitutional but had no concern for breaking the law because they knew full well…no one would stop them. It was damn near impossible to push back against anything Obama did because of course you would be called a racist. Groan.

It is never easy to streamline a budget but sometimes it is appropriate and necessary. President started on day one streamlining America by way of getting rid of governmental positions that were unnecessary as well giving more power back to the States, which it how it is supposed to be. Again, despite what gossip may be spread by the likes of cable fake news talk show hosts the President understands that to balance a budget you cannot spend more than you make. This is basic math.

Conservatives do not buy hog wash unless they are washing a hog. They easily grasp there is a difference between boys and girls and 1+1 will always equal 2.  And I for one already have my bells on to vote for President Trump and Vice-President Pence again in 2020 because these two men are making America great again.