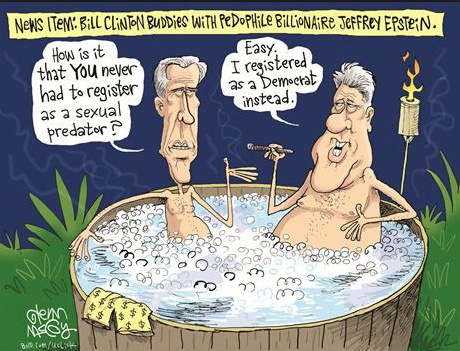 The media drooled over the 20-year-old hot mic recording of Trump dishing to Billie Bush about groping women. They were thrilled to talk incessantly about Senatorial candidate Roy Moore’s accusations of unwanted sexual advances against him. To be honest, as a woman both situations were very unfortunate and in the case of Moore, if the accusations are true then he should either step down or if elected be removed from office.  Republican voters in Alabama remain consistent when it comes to their values and if they feel a candidate is not worthy of a vote they will not support them.

Where is the outrage in the coverage for Senator Al Franken’s reported behavior caught in pictures groping little girls and fellow female Hollywood buddies? Just this week Franken had two women come forward and accuse him of groping them but so far your coverage of him seems as weak as his stance on refusing to step down from office. Where are the Democrats in coming out to ask Franken to step down? Bueller?

CBS host Charlie Rose, who just last week was covering Moore’s accusations, now finds himself facing some of his own with nine women accusing him of inappropriate behavior to include walking around naked and telling his 21 year old assistant of his fantasies. Now he’s suspended but as usual, we only hear “I’m sorry” after they’ve been exposed.

For me, as a conservative woman, the largest example of hypocrisy comes with the media’s continued support of Bill Clinton. If we are going to scrutinize a 20-year-old trash-talk recording of Trump and call it unacceptable, then it’s time to finally–honestly–address Bill Clinton’s proven impropriety while a sitting President. All the women who came forward during the Lewinsky affair were brutalized by the same media that gives their Leftist friends a free pass. So these days, it’s virtually impossible to take the media’s selective outrage seriously.

#MAGA U.S. Growth On the Rise