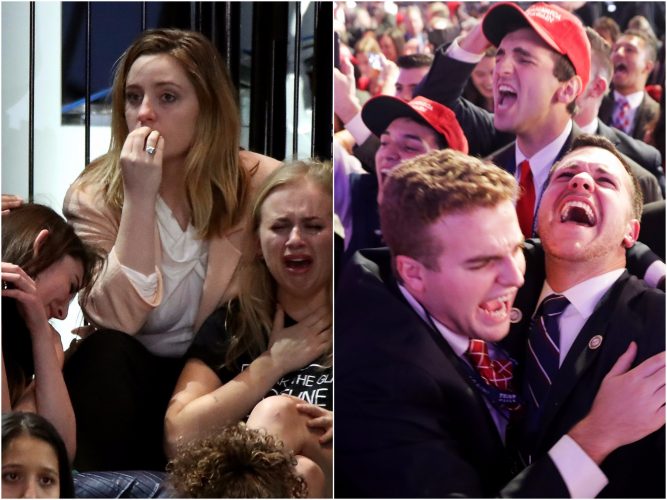 One year ago the day before the election,  Ann-Marie Murrell and I were in New York City appearing on a live television broadcast streaming to The Netherlands.  It was interesting to see how upbeat and excited everyone was about Hillary’s upcoming victory.  Ann-Marie and I were the “token” Trump supporters who were put on the show to be ridiculed, laughed at and pitied but we both knew what we were getting into and went for it anyway.  We took the abuse and stood our ground, even when they asked us if we were going to “riot in the streets” when he lost.  We laughed at that and said that that was not something conservatives did when they lost.  Throughout the program both of us calmly just kept saying, “we’ll see what happens.  You know…he might win.”  With that, they almost fell on the floor laughing at us.  When we left, they were making their way to the Javits Center for the Hillary Victory party and Ann-Marie and I were going off to dinner.

Well, you all know what happened that night and the meltdown that it caused in the liberal/Democrat world.  They LOST IT!  Not only did they lose the election, they lost their minds!  In this article from The Washington Free Beacon you can see how unhinged they really were when the news came in that “OMG! Donald Trump WON!”  It is hilarious but disturbingly pathetic that these people had such a mental breakdown.  Here is an example:

Rebecca Traister, writer at large for New Yorker Magazine, shared her feelings on being confident about a Clinton victory and how she subsequently felt “so alone” when it was apparent that Clinton would lose. She also observed Clinton supporters throwing up and crying on the floor, according to Esquire, which recounted the progression of her thoughts throughout the night.

“They were serving, like, $12 pulled pork sandwiches [at the Javits Center]. It was nuts, people were bouncing off the walls. Everyone genuinely believed she was going to win. I don’t know if it made me feel more confident or not.

I felt so alone, I knew it was done. I was by myself on the floor. I started to cry.

I was thinking everything from, “I’m gonna have to rewrite my piece” to, “Can we stay in the U.S.?” I texted my husband, “Tell Rosie to go to bed. I don’t want her to watch.”

Or how about this:

Univision news anchor Jorge Ramos shared his plan for the Trump presidency, which is to resist and not be neutral.

“I’ve been to wars, I’ve covered the most difficult situations in Latin America. But I needed to digest and to understand what had happened. I came home very late. I turned on the news. I had comfort food—cookies and chocolate milk—the same thing I used to have as a kid in Mexico City,” Ramos said. “After that, I realized that I had been preparing all my life for this moment. Once I digested what had happened with Trump and had a plan, which was to resist and report and not be neutral, then I was able to go to bed.”

Former CNN host Reza Aslan expressed his horror, describing how he had a panic attack when he heard the news that Trump won.

I thought, “Oh my God, how terrible are we that it’s even this close?”

My wife stayed up and I went to sleep, then she woke me up around 1 or 2 in the morning bawling and told me that it was over. My poor, sweet wife. She wanted to hug and kiss me but I went into a panic attack and couldn’t breathe.

I remember thinking, as clear as day, this is who we are. This is what we deserve.

Unbelievable.  Yes, liberals, you lost.  One year ago and you are still not over it, still can’t accept or face the fact that your candidate was horrible and you just weren’t in step with mainstream America.  You are still acting like children who didn’t get their way and now you are out for revenge.  Instead of accepting the outcome and at least giving President Trump a chance, you would rather see America fail and divide itself while you continue your “Veruschka” temper tantrum, (from “Willie Wonka”).

My advice?  Get over it.  Grow up and deal with it or step aside and retreat to your “safe space”.  The country is moving forward.