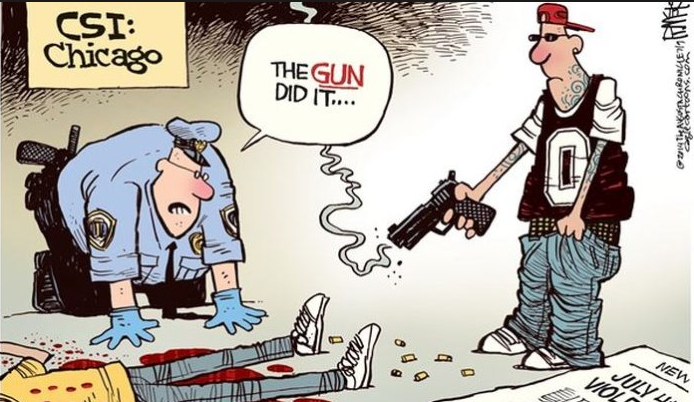 Much hysteria and hand-wringing among the anti-gun left has occurred as a result of recent multi-victim shooting incidents. Whether they are against the public or law enforcement personnel, they are to be abhorred and condemned as the uncivilized acts they are. But the firearm is just the tool. The crime begins in the brain of the criminal, not the trigger finger (or bump stock).

However, not one of the many latest gun-control proposals introduced in both houses of Congress would do a single thing to hinder the commission of such acts but would make the lives of legal and peaceable firearms owners far more difficult. This should not surprise anyone when the real purpose of these measures is more about control than firearms themselves.

Let’s look at this problem from a far more sensible and highly simple viewpoint. Let’s look at this from the criminal’s mindset. Criminals want to be able to do their nasty business without consideration of its impact on others. They are only interested in the consequences to themselves. Many years ago, a well-intentioned politician introduced a bill that made possession of a firearm by a convicted felon a separate and distinct charge that could be filed in federal court on top of any charges brought under other criminal statutes. There was also a bill introduced that made possession of a firearm by anyone in the commission of any felony a federal crime, again, in addition to the underlying charges. Both bills became laws and have been on the books for at least 30 years or more.

The only problem with these two laws is that they have become the favorite tool to encourage criminals to plead guilty to their initial crimes. State prosecutors, eager to produce plea-bargains that lighten case-loads, arrange with federal prosecutors to either drop or not charge the criminal for possession of the firearm in exchange for a guilty plea on the original charge. Often, the original charge is reduced as well making the punishment far less and reducing the ability of the criminal statutes to deter the criminal activity.

Recent statistics have shown that the firearms possession crimes created by these federal statutes are some of the most infrequently prosecuted charges in recent history. Even in gun-violence-plagued cities such as Philadelphia, Los Angeles, and Chicago, possession of a firearm is not a common charge levied on criminals and gang members when arrested for other violent crimes. When it is charged, it is often dismissed in the plea deal. How does anyone expect to put even a dent in unlawful use of firearms if we do not use the few useful tools in the law enforcement toolbox?

So, what’s the answer? It’s so simple that a kid could figure it out, but don’t expect politicians to jump on this band-wagon with any enthusiasm unless they hear demands from their constituents to leave their hands off legal gun ownership restrictions and focus on the criminals. Here’s how to fix this mess.

Amend the federal statutes to make the charge a mandatory one that must be prosecuted regardless of any other charges filed against the offender. If the offender pleads guilty to the crime in state court, the gun possession charge automatically adds 5-10 years to his/her sentence. No plea bargains would be permitted on the gun charge, nor any reduction of sentence below five years. To prevent prosecutors from failing to introduce evidence of firearms possession as a means of reducing the penalties, this practice could also be statutorily prohibited. If a firearm was recovered, the charge must be included.

Yes, the workload of the courts (both state and federal) might be increased somewhat as it reduces the willingness of criminals to plead guilty, but at the same time, it just might help reduce the workload of those same courts as the number of firearms-related crimes begins to fall.