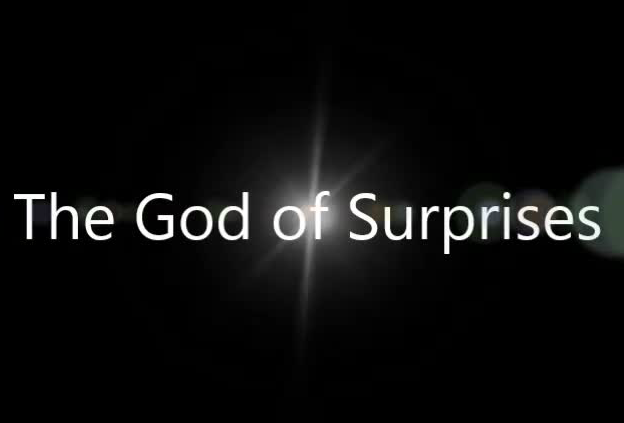 Have you ever bought or made a gift for someone that you know they will absolutely love? Have you been so excited about it that you can hardly wait to give it to them? As I read through the pages of the bible, I discover that God often likes to surprise His children in this fashion. And talk about anticipation, He knew about it for eternity!

Here are some of my favorite God surprises from scripture:

The Creation of Eve

“20 …but for Adam there was not found an help meet for him. 21 And the Lord God caused a deep sleep to fall upon Adam, and he slept: and he took one of his ribs, and closed up the flesh instead thereof; 22 And the rib, which the Lord God had taken from man, made he a woman, and brought her unto the man. 23 And Adam said, This is now bone of my bones, and flesh of my flesh: she shall be called Woman, because she was taken out of Man.”

Sounds like Adam was pretty excited! And BTW, God was the first anesthesiologist!

David Chosen to be King of Israel

“11 And Samuel said unto Jesse, Are here all thy children? And he said, There remaineth yet the youngest, and, behold, he keepeth the sheep. And Samuel said unto Jesse, Send and fetch him: for we will not sit down till he come hither. 12 And he sent, and brought him in. Now he was ruddy, and withal of a beautiful countenance, and goodly to look to. And the Lord said, Arise, anoint him: for this is he. 13 Then Samuel took the horn of oil, and anointed him in the midst of his brethren: and the Spirit of the Lord came upon David from that day forward. So Samuel rose up, and went to Ramah.”

“18 Behold, when we come into the land, thou shalt bind this line of scarlet thread in the window which thou didst let us down by: and thou shalt bring thy father, and thy mother, and thy brethren, and all thy father’s household, home unto thee.”

“23 And the young men that were spies went in, and brought out Rahab, and her father, and her mother, and her brethren, and all that she had; and they brought out all her kindred, and left them without the camp of Israel.”

The Scarlet Cord was a prophetic symbol of the the blood Jesus would shed on the cross for us. This is captured beautifully in this wonderful song.

But the story doesn’t end there. Rahab is listed in the lineage of Christ! She was the great-great grandmother of King David.

I am humbled by the fact that God used someone we might look down upon as a recipient of his grace. We are all sinners that Christ died for.

“8 And there were in the same country shepherds abiding in the field, keeping watch over their flock by night. 9 And, lo, the angel of the Lord came upon them, and the glory of the Lord shone round about them: and they were sore afraid. 10 And the angel said unto them, Fear not: for, behold, I bring you good tidings of great joy, which shall be to all people. 11 For unto you is born this day in the city of David a Saviour, which is Christ the Lord. 12 And this shall be a sign unto you; Ye shall find the babe wrapped in swaddling clothes, lying in a manger. 13 And suddenly there was with the angel a multitude of the heavenly host praising God, and saying, 14 Glory to God in the highest, and on earth peace, good will toward men.

Does anyone else hear Linus when they read that?

I would love to be able to go back in time to that moment and experience it with the shepherds.

The Women Finding the Empty Tomb on Easter Sunday

“1 And when the sabbath was past, Mary Magdalene, and Mary the mother of James, and Salome, had bought sweet spices, that they might come and anoint him. 2 And very early in the morning the first day of the week, they came unto the sepulchre at the rising of the sun. 3 And they said among themselves, Who shall roll us away the stone from the door of the sepulchre? 4 And when they looked, they saw that the stone was rolled away: for it was very great. 5 And entering into the sepulchre, they saw a young man sitting on the right side, clothed in a long white garment; and they were affrighted. 6 And he saith unto them, Be not affrighted: Ye seek Jesus of Nazareth, which was crucified: he is risen; he is not here: behold the place where they laid him.”

Notice that the men were no where to be found. They had scattered and run.

Even for us today this is a surprise beyond imagination to think that God himself would take on human form, die for our sins and be raised to life so that we may spend eternity in heaven with Him by simply accepting his free gift of salvation!

And even today God continues to surprise. A couple of examples (among many) in my own life:

What are some of your favorite biblical and personal surprises that God has done for you?

#MAGA: The Push Back Team

Why Has Bullying Become the Problem That it Is?