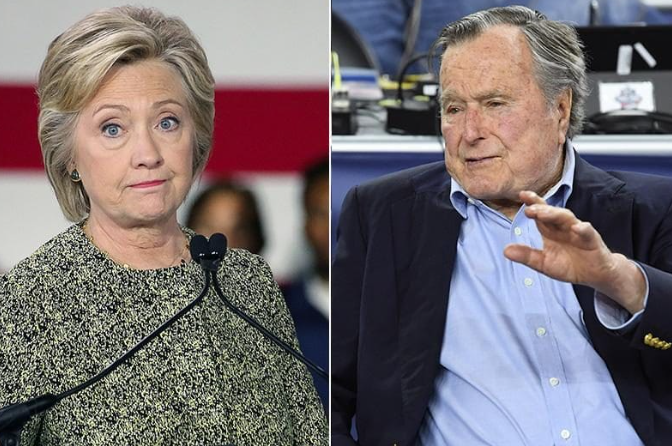 Remember when those words came out of the mouth of George H.W. Bush, and then months later the American people were given one of the largest tax increases in modern history? (For the record, he claimed the tax hike was “for the sake of the country”…)  In 2014, Bush was honored with a JFK “Profile in Courage” award for putting the country ahead of his party promise to the American people. So it is no surprise that Bush is receiving accolades from Democrats now, some 27 years later, for blasting President Trump in a new book in which he also conveys that he voted for Hillary Clinton in the 2016 election.

Think about this for a moment. We have the dynasty of the Bush’s and Clinton’s banding together, supporting each other in their disdain for a President that was voted in by Republican and Democrat voters. For the majority of American people, while they may respect the former President because of his recent health woes and age, they also feel he yet another out-of-touch career politicians. It appears that the senior Bush is criticizing President Trump simply because he doesn’t measure up to how Bush thinks he should behave. However it is ironic that Bush has deemed Hillary Clinton, who is in many ways an actual criminal, worthy of his vote.

So basically what HW Bush is suggesting to the American People is that character only matters if it’s not about a Clinton.

Forget the Russian collusion, the Clinton Foundation ties to foreign governments pay-for-play, Hillary Clinton’s bleaching of her private server, the fact the DNC rigged the elections in favor of Clinton during the 2016 Presidential elections. Forget how Bill Clinton had a private meeting on a tarmac with then Attorney General Loretta Lynch shortly before Lynch opted to not press charges or open an official investigation against Hillary for leaks of classified information hacked by Russia. Forget President Bill Clinton’s well publicized affair with an intern while inside the White House. Instead George H.W. Bush wants you to know that he considers President Trump a “blowhard motivated by ego”. What was Clinton motivated by? Power. Certainly, Bush is not suggesting that Hillary didn’t have an ego…

“This guy doesn’t know what it means to be president”, says Bush. With all due respect Mr. President, maybe the American people no longer desire the type of person you believe does fit into that category. Obviously, if you felt Hillary deserved your vote even after all the scandals that plagued her during her campaign and now, maybe it is you, sir, who does not truly understand what it means to be a President.