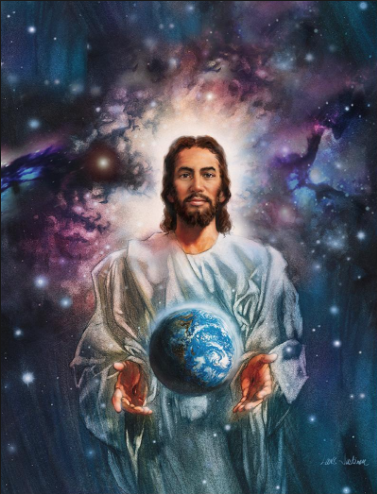 John Baldwin’s article this past week about Jesus power to overcome all of life’s storms made me immediately recognize that Jesus is also the answer to some of the most perplexing questions we face today.

One of the most divisive and confusing question that many concern themselves with these days is Climate Change and what is causing it. Despite all the hysteria among those who blame the fluctuations in our climate on mankind’s industrial activities, I have always found that to be the ultimate arrogance. How can anyone look at the order of the entire universe and believe that a few billion little ‘ol humans could muck up what God created? That’s arrogance.

But let’s break the issue down and ask some questions…

How did it come about that animals take in oxygen and exhale carbon dioxide while the vegetable world does just the opposite? If that one trait of these two groups of organisms were not opposites, the earth would be nothing more than a pile of rocks. This opposition is what allows plants and animals to help each other live on our planet.

How did it come about that the earth wound up just the right distance from the sun (a star among billions of trillions of those twinkling lights in the sky) to preserve both human and plant life as we know it? Do we realize what just one million miles one way or the other could be the difference between life and death?

How can a “greenhouse effect” be valid in the case of the earth’s atmospheric envelope when there is no roof? When was the last time you saw a greenhouse work properly without a roof? The answer is clearly, “Never,” since to raise the temperature, a greenhouse must artificially trap the air within the greenhouse and keep it heated by the sun’s energy passing through the glass roof. Otherwise, as air rises through the atmosphere the temperature dissipates as heat is lost in the void of space.

So why is the carbon-dioxide exhaled by humans and created by burning coal, oil, gas, etc., continuing to increase? Perhaps it would be instructive to look at the levels of the atmosphere over hundreds of years. CO2 levels are far lower now than other periods in the past. More importantly, the laws of physics, chemistry dictate that matter is never created or destroyed. It can only change form. The Carbon Cycle is a miracle of science that keeps the ocean habitable for fish and other marine life. Were it not for the chemical processes that continually take place within the ocean and atmosphere – exchanging various chemicals to maintain the water properly, fish would die…just as they periodically do in an aquarium when the chemical balance is not artificially maintained at precise levels. The Carbon Cycle also cleans our atmosphere of chemicals that are harmful including absorbing excess CO2 not absorbed by plants within about seven years of it being released into the air.

How can mankind compete with the normal everyday volcanic activity the earth experiences? One major eruption of a medium-sized volcano anywhere in the world spews more CO2 and other gases into our atmosphere than mankind has ever produced since fire was discovered. Besides the ones that are above the ocean, there are literally thousands of volcanos and vents within the earth’s crust below the surface of our oceans that are continually spewing chemicals and CO2 out of the earth’s very core.

When you step back and look at all the facts – supported by science that has been proven in laboratories all over the world – there is but one conclusion that can be drawn. All these seemingly un-connected facts do not support a random and haphazard arrangement. Nor does it support mankind’s activities as the cause of periodic fluctuations in the earth’s climate.

The answers take us full-circle back to the stories related by John in his article. We exist because of the omnipotence of an infinitely intelligent Creator of the Universe possessed of powers that the human mind can only marvel at but fail to comprehend the necessary adjustments and calculations needed to make it all work in synchronicity for thousands of years.

Just look out the window. That’s all it should take to make every human being humble himself to the point that none could every again suggest that our occupation of the earth could ever undermine God’s power to protect it. The winds, the waves, the sun, the moon and the stars obey his every command. Don’t you think He knows how much CO2 we need to keep us healthy and the trees green? Just asking…

Nov. 7 Elections & Beyond: Christians Have A Responsibility To Vote