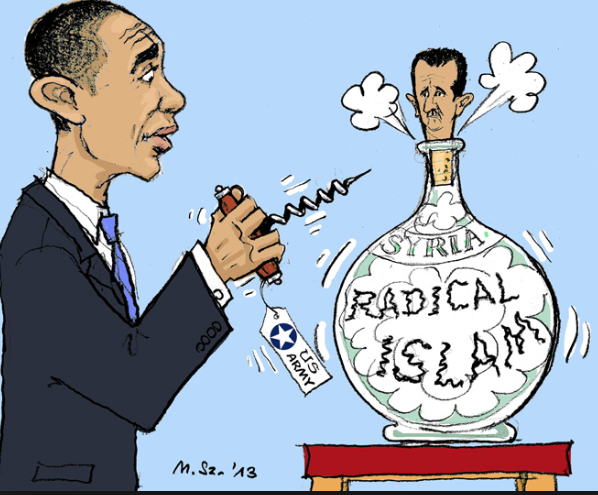 While leftists tear down the statues of slave owners from centuries ago, it was the left that brought back the sale of black men as property.

Slavery was always one of Barack Obama’s favorite subjects.

It was a favorite subject because it provided him with countless opportunities for tearing down America.

When called upon to disavow the racist, anti-Semitic and anti-American rants of his mentor, he instead denounced the Constitution as “stained by this nation’s original sin of slavery.” At the funeral of the Dallas police officers murdered by a member of the racist hate group he supported, he once again invoked this original sin even while he was justifying Black Lives Matter’s bigotry and violence.

At Hillary’s DNC convention, Michelle Obama claimed that the White House had been “built by slaves”.

The unifying theme was that America’s racist past made its origins, including their constitutional restraints on his power, illegitimate. A Constitution tainted by slavery should not be able to inhibit the actions of the nation’s first black president. His wife had a special moral authority over the White House because it had been built by slaves. Slavery gave the Obamas a unique moral claim on power.

But Barack Obama and his ancestors had never been slaves. They might have been slave owners and sellers. And America’s first black president unquestionably helped bring Muslim slavery back to Libya.

After Obama invaded Libya to aid the Muslim Brotherhood, black slaves are being sold there once more.

Videos show black people being put up for sale for as little as $400 by Arab Libyan Muslim slave traders. The black men being sold as slaves are described as “big strong boys for farm work.”

After years of lecturing Americans about the “original sin” of slavery, Obama brought it back.

The black men being sold as slaves are Nigerians. Islam forbids Muslims to enslave Muslims. Nigeria has a large non-Muslim population. It is likely another case of Arab Muslims selling Christians into slavery.

And, most prominently, Libya.

Obama’s Arab Spring encouraged Islamist movements in their bids for power whether they used ballots or bullets. The resulting devastation in the Middle East, with its death toll in the hundreds of thousands, and the rise of ISIS, has captured the world’s attention. But the Islamist wave spread chaos and terror through Africa. Egypt and Tunisia fell into the hands of Islamist killers who brutalized their own people even as the media cheered these “democratic revolutions”. Boko Haram allied with ISIS in Nigeria.

And Obama illegally bombed Libya to aid the Muslim Brotherhood and allied Islamist groups in their bid for power. The regime change operation in Libya had been urged on by Hillary Clinton. The former Secretary of State had been encouraged by her associates to use it as a platform for a presidential run. But the Islamist takeover in Libya made for a bad photo op. Our attempts to address the flow of Qatari weapons into the hands of terrorists (after Obama gave a pass to their weapons smuggling scheme during the civil war) led to the Benghazi massacre. And the blackest stain on Hillary’s record.

But it didn’t stop with Benghazi.

Libya tumbled into a second civil war between Islamists and the Libyan government. Despite the media blackout, the violence touched off by Obama’s regime change has never really stopped. ISIS has a significant presence in Libya. And until recently had a death grip on parts of Benghazi.

And that isn’t the worst of it.

The Islamist Arab rebels had quickly begun targeting Africans during the civil war in a racist purge. Photos and videos showed beheadings, beatings and mutilations. The false claims of genocide in Benghazi that Obama had used to justify his invasion became real when his invasion led to the actual ethnic cleansing of Africans in Libya.

The first black president, who had allied with hate groups such as Black Lives Matter that accused America of genocide, had made possible an actual genocide of black people by his Arab Muslim allies.

The rebels he had armed and backed would identify themselves as, “The Brigade for Purging Slaves, Black Skin”.

And then it got even worse.

The Tuaregs, a Berber Islamist people whose leaders claim to trace their “pure” ancestry back to Mohammed, invaded and captured a large section of Mali. Accompanying them were Al Qaeda Jihadists. The Tuaregs keep slaves and have been at war with the “blacks”. Their hostilities were motivated in large part by the conviction that “blacks” were slaves while they were the descendants of Mohammed.

Obama ignored another racist Islamist war caused by his pro-Islamist intervention. Instead it was the French that stepped up. The recent deaths of four American soldiers in Niger however can be traced back to the disaster in Mali.

Sgt. La David Johnson, the African-American soldier whose condolence call by President Trump touched off a storm of leftist outrage, was murdered after being captured and tied up. The Jihadists who murdered Johnson are believed to be from the Islamic State in the Greater Sahara, an ISIS affiliate empowered by the Mali invasion, whose perpetrators are from a group deeming themselves “white”.

While President Trump has been accused of racism by Rep. Frederica Wilson over the death of the African-American soldier, it was Obama who had empowered the racist Islamists that murdered him.

Meanwhile back in Libya, the slave trade has made a comeback. Videos show public slave auctions in Libya where light skinned Arab Libyans sell black Nigerians for a few hundred dollars.

The slave auction, that terrible institution, wasn’t brought back by the right. It was the left.

Slavery isn’t new to the Islamic world. And where Islam rules, slavery returns. The leftist-Islamist alliance doesn’t just mean the burning of churches and the bombing of synagogues, or that Jewish students are hounded out of college campuses while European streets flow with blood.

Muslims immigrants have brought slaves to America. When Islamists took over Egypt, one of their political projects was undoing the ban on slavery. “It’s not possible to say that slavery is inherently absolutely categorically immoral in all times and places since it was allowed by the Quran and the Prophet,” Professor Jonathan Brown, an Islamic Civilization professor, at Georgetown, insisted.

Brown is an Islamic convert. The Washington Post, and the rest of the left, came to his defense.

The left spends a great deal of time lecturing Americans on the evils of slavery. But it is they and their allies, from Cuba to Libya, who practice slavery today.

The slave auction is ancient history in America. But Obama’s Islamist alliance brought it back to Africa.