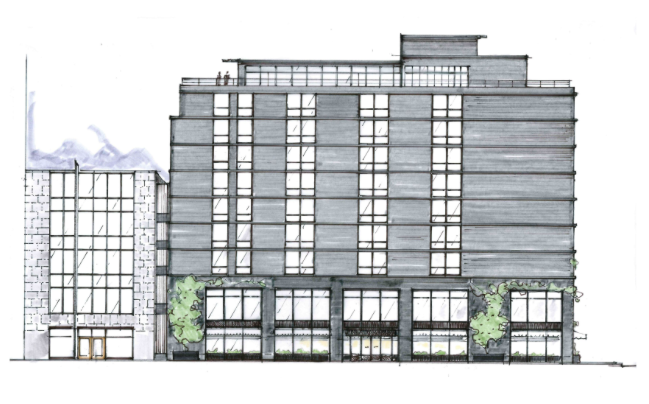 The world’s first leftist anti-Trump hotel is here. You won’t be surprised to learn that it’s opening in Washington D.C. (with additional locations in Seattle, Hong Kong and San Francisco.)

And you’ll be even less surprised to hear that it’s a luxury hotel with organic mattresses and crystal healing. Instead of a Bible, there’ll be a United Nations pamphlet. The minibar will have an activist toolkit. Staffers will be hired for their commitment to leftist social justice. (That’s technically discrimination, but it’s not as if leftists live by the laws that they impose on the rest of us.)

The Eaton Workshop is for a “global tribe of innovators, progressive thinkers and creatives”, “thought leaders”, “provocative minds” and “kindred spirits”. There will be “dialogue and debate”, but no one to debate with because the hotel is only for leftists “who are thinking outside the box”.

But not so far outside the box that they might question leftist dogma or use Airbnb.

The People’s Republic of Eatonistan will cater to “a diversity of fields and backgrounds as well as gender and ethnicity” as long as they can afford to stay at a luxury hotel. So it’ll mostly be wealthy white leftists.

Eaton Workshop claims to be inspired by Warhol’s Factory and Burning Man. So don’t expect much from room service.

Why build a luxury hotel that’s a living embodiment of the Saturday Night Live skit about lefties escaping into a bubble after Trump’s victory? Because that is what a spiteful and elitist left really wants. Behind the flattery about innovators, thinkers and provocative minds are a bunch of wealthy leftists who hate the rest of us. They’re the media, the entertainment industry and a big chunk of the government.

That’s why Eaton House is opening in Washington D.C.

When leftist protesters flooded the city for the inauguration, they hated having to fly and stay with Trump supporters. Now there will be a self-segregated hotel so that they won’t have to.

Members of the government resistance will have cocktails in between talks by Ta-Nehisi Coates and Frank Rich. You’ll bump into Keith Olbermann screaming at the concierge and Leonardo Dicaprio at crystal healing before testifying on Capitol Hill on how only science-haters question Global Warming.

“It’s like a non-profit, but better,” Katherine Lo, its founder, explained. It’s better because it will make the Lo family lots of money from the smug and stupid leftists paying premium prices for identity politics.

Katherine Lo is a child of the Lo family whose net worth is in the billions. Great Eagle, their family business, controls hotels all over the world, including the Langham and Eaton hotel chains.

Like most leftists, Lo inherited her money. She has a BA in Sociocultural Anthropology.

Behind the slick leftist claptrap is Great Eagle Holdings which is rolling out the Eaton House hotels under the guise of “responsible capitalism”. Lo is just the public face of an effort by, Ka Shui Lo, her dad, to reinvent his mediocre hotel brand by making it more socially conscious.

Great Eagle is based out of Hong Kong. And Hong Kong is under the thumb of the People’s Republic of China. So you can bet that Eaton House in Hong Kong won’t be catering to anti-government radicals.

Ka Shui Lo’s real estate really took off after the Tiananmen Square massacre when its impact on real estate got him the future site of Citibank Tower at a bargain price. His younger brother, Vincent Lo, also benefited from the Communist massacre of pro-democracy protesters, when he built a hotel with the Communist Youth League and when it grew troubled after Tiananmen Square, helped with their loan.

“I helped out,” Lo is quoted as saying. “They’ve never forgotten. Relationships are long term here.”

Vincent Lo had his own ugly history with President Trump. And he sits on Great Eagle’s board.

The Lo family is entangled with a number of Chinese state-owned enterprises. Great Eagle has partnered in the U.S. Real Estate Fund with China Orient Asset Management: a “bad bank” for the state-owned Bank of China. The Bank of China is among the principal bankers of Great Eagle.

And so the leftist anti-Trump luxury hotel is actually part of a journey from the Tiananmen Square. The Anti-Trump #Resistance will be brought to you by the leftist massacre of democracy protesters.

You can check out any time you like from leftist tyranny, but you can never leave.

All the calls for “political liberation” by “provocative voices” end with tanks and corpses. The Lo family bet on the Communist Party remaining in power. And the bet paid off. Now they’re betting on leftist power in America. And if it has to be done with tanks and bullets, so that the “thought leaders” can remain victorious, as the New York Times wrote of the Soviet massacres, “You can’t make an omelet without breaking eggs.” And you can’t make a luxury hotel for leftists without an activist toolkit.

More recently, the New York Times reported that Obama had lamented that it would be much easier to be running China. Before the left suddenly decided that colluding with America’s enemies was a bad idea, Obama had put forward Chas Freeman, who had sat on the board of a Chinese state-owned oil company, and had argued that the Tiananmen Square protests should have been nipped in the bud.

You can’t make Egg Foo Yung without breaking a few eggs either.

The Eaton Workshop “imagines a more utopian future” for an “inclusive tribe of changemakers.”

Behind the art exhibits, the crystal healing, the gurus, the organic mattresses, the talks and podcasts, the Eaton Workshop reveals the ugly truth about the left. It’s the movement of a pampered and privileged elite that doesn’t want to share a hotel, let alone a country, with the rest of the country.

The same leftist activists who would boycott an Israeli hotel will have no objections to its parent company’s links to a brutal Communist dictatorship that has murdered millions. While they are eager to denounce America as a genocidal and racist tyranny, Tiananmen Square means nothing to them.

Leftist elites have built their own culture, even apart from the garbage culture that their media outlets and entertainment industry force down our throats, of narcissistic self-regard, identity politics victimhood, faux spirituality, pseudo academic jargon and conspicuously political consumption.

The Eaton Workshop wants to cash in on all this. And it will.

A leftist luxury hotel embodies all the sordid hypocrisies and cognitive dissonance of the left: its entitlement and victimhood, its indulgence and oppression, its self-righteousness and degeneracy.

It is what the left really wants.

Leftists want a totalitarian state for us and a luxury hotel for themselves. They want to ban cigarettes, large sodas, fast food and plastic bags for the peasants even as they lounge about smoking pot, gorging on the priciest foods and ordering organic online. (Shopping for groceries in stores is for the proletariat.) They want vigorous debates in which no one is allowed to disagree with them. They want open borders for the country while they use price barriers to keep the rabble away from their own playgrounds.

And they want to cloak all these hypocrisies in a meaningless jargon full of empty flattery for their brilliance as “thought leaders”, “changemakers”, “innovators”, “creatives” and “provocative thinkers”, which dresses up their privileged politics in the revolutionary uniforms of “personal liberation” and the fake robes of spirituality of “journeys of self-realization”.

But if you pull back the silken curtain from the narcissistic vanity of a leftist elite in love with its own voices, you can smell the smoke, hear the screams and see the tanks waiting outside.

The Eaton Workshop will be there for the Antifa trust fund kids arriving to smash in the skull of an African-American police officer, for the #Resistance NSC employee leaking national security secrets to a Washington Post reporter and the Democracy Alliance billionaire plotting a coup against the country.

Leftist culture is the lie an extremist movement tells itself about where it will go next. The Eaton Workshop is the hotel where the left can stay and lie to itself as it gets off the democracy train.

And the tanks and red flags are waiting outside.

Maybe the next Eaton Workshop can be on Tiananmen Square.

Legislating From the Court, Using the Constitution as the Guidepost

Legislating From the Court, Using the Constitution as the Guidepost

When it Comes to Having 6 or 600 Problems, It’s Not the Number That Counts

Dr. Jamie Glazov: Facebook's Jail and Rule to be "Sensitive"

Conservatives and the Wrath of Social Media