In the winter of ’56, Khrushchev told the 20th Congress of the Communist Party of the Soviet Union that Stalin may not have been a very nice guy. In the fall of ’17, the media began to concede that maybe Bill Clinton did abuse a whole bunch of women. And maybe those women weren’t really part of a vast right-wing conspiracy to make a bloated piggish progressive hero seem like he might not be a very nice guy. 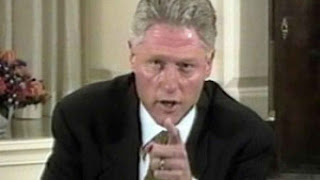 The Democrats smeared Bill Clinton’s accusers then. Now they’ll exploit them to throw the Clintons out.

The #MeToo campaign provided an opening. But if you really want to understand why the left is disavowing Bill Clinton, ignore the hashtags and look at the bigger picture.

Earlier this month, the rollout of Donna Brazile’s book raked Hillary Clinton and her campaign over the coals. The former interim DNC boss made the case that the Clinton campaign had rigged the primaries.

Brazile’s outrage at the rigging is laughable. Not only was she caught passing a debate question to Hillary, but the only reason she was allowed to replace Debbie Wasserman Schultz is that she was a Clintonista who had served as a Clinton adviser and was promoted to head Gore’s campaign.

After Hillary’s collapse, Brazile was left out in the cold. Like Schultz, she was one of Hillary’s fall girls. And unlike Schultz, she didn’t have a cozy congressional district to call her own. Her CNN contract was torn up after the debate question leak. (Though if you think CNN was actually surprised that a Clinton ally leaked it to the Clintons, you’re also shocked that there’s gambling going on at Rick’s Cafe Americain. CNN had to disavow Donna who then had to disavow Hillary. Now the Dems are disavowing the Clintons.)

Brazile’s book tour was Act 1 in purging the Clintons from the Dem establishment. Talking about Bill Clinton’s sexual harassment and abuses is Act 2. And the odds are very good that there’s an Act 3.

Why get rid of the Clintons? Let’s look at what the First Grifters have been doing to the Dems.

In May, Hillary rolled out Onward Together. The new SuperPAC was supposed to fundraise for lefty groups. But the groups don’t actually appear to be getting the cash.

Understandable. The flat broke Clintons always have lots of bills to pay and private jets to book. And good chardonnay doesn’t come cheap. A 1787 vintage Chateau d’Yquem runs to $100K a bottle.

Fresh from that success, a paid advisor to Hillary co-launched something being called Party Majority. This wonderful new organization would “act as a parallel structure to Democratic Party committees at the national and state levels”, vacuuming up a whole lot of cash while putting its boot on the DNC.

The Clintons were once again trying to displace the DNC. And that would let them skim a lot of cash from the DNC to fund their political operation and lifestyle. And, even once again, rig the process.

Party Majority rolled out in early November. Since then the Clintons are suddenly being hit from all sides by their own.

Funny how that works.

If President Hillary Clinton were in the White House, the First Gentleman could work his way through an entire nunnery and every media outlet in the country would praise him as our greatest feminist.

If the Clintons had done the decent thing (for the first time in their miserable grifter lives) and stepped away from politics, Bill could have been a bitter, bigoted and befuddled Democrat elder statesman.

But the Clintons just wouldn’t stop. And so the circular firing squad has finally been convened. Its members are hypocritically pretending that they’re purging Bill because they suddenly care about the women he had sexually assaulted over the years.

It only took the Dems an entire generation to figure out that rape is wrong.

Hillary Clinton’s approval ratings are terrible. Every time she goes on television, more people are likely to vote Republican. Her entire existence is a reminder of why the Democrats lost so badly in ’16.

Not only won’t Hillary Clinton retire to bake cookies and send anonymous threatening letters to her neighbors because their kids occasionally throw a ball over her mansion’s iron gates, but she insists on sabotaging the 2020 candidates who are her party’s best hope to succeed where she miserably failed.

Both Bernie and Joe, unlike her, are viable 2020 candidates. (Which says nothing good about the Dems.)

And what the media does “believe” is that the Clintons will continue to be a liability that might cost them victories in 2018 and 2020. The DNC badly needs money. The Clintons are once again posing a threat to the DNC’s financial viability. And the Dems have become less willing to lose House and Senate seats to sate the insatiable greed of the grifters from Hope.

Then there’s 2020. The Dems don’t want to risk their nominee facing passive aggressive attacks by Hillary Clinton. Nor do they even want to see Hillary Clinton on the air for the entire election.

The Clintons could have had a nice retirement. Seats on boards and foundations. Occasional smaller scale speaking gigs. Bill would have been a featured speaker at the next DNC convention.

And maybe even Hillary in a lesser role.

But they wouldn’t go quietly. And now the left is making it a mandatory retirement.

Act 1 blames Hillary for rigging the primaries. Act 2 calls out Bill’s abuse of women. Acts 3, 4 and 5 will delve into some other Clinton scandals that Democrats have been denying for over a generation. If the Clintons don’t get the message, the final act will plant a big red boot in their behinds.

And this won’t even be the first time that the Dems tried to get rid of the Clintons.

After Bill’s time was up, the Dems and the media tried to head off a Hillary political career at the pass. Let’s flip through the pages of the New York Times in 2001 that describes Hillary’s “calamitous Senate debut” and cautions that “talk about her presidential prospects has ground to a halt.”

“The man is so thoroughly corrupt it’s frightening,” a Times column reads. “The Clintons may or may not be led away in handcuffs someday.”

In AmSoc, history is constantly being rewritten. A few years later, no criticism of the Clintons could be allowed. And everyone forgot that Carter’s chief-of-staff had called them, “The First Grifters.”

Or at least they pretended to forget.

It’s not the first time that the Dems have tried to get rid of the Clintons. But it might be the last.

Like Stalin’s Communist successors, Democrats should not be allowed to pretend that they knew nothing or that their purge of the Clintons is motivated by a sudden attack of integrity.

They’re purging the Clintons for the same reason that they covered up for them.

They’re calling out Bill Clinton for his sexual assaults for the same reason that they covered them up.

That’s the dirty, ugly truth. And it’s as dirty and ugly as the Clintons and the Democrats.

When it Comes to Having 6 or 600 Problems, It’s Not the Number That Counts