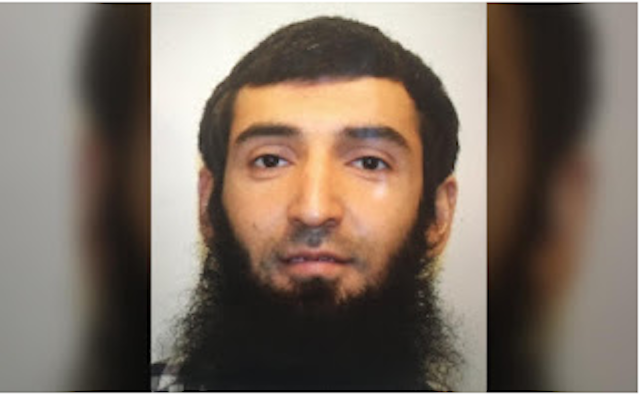 Earlier this year, a final settlement was reached in the war on the NYPD’s counterterrorist Islamic surveillance. The Manhattan courtroom where the lawfare effort to dismantle the NYPD’s ability to stop terrorist attacks was heard is blocks away from the site of the latest Islamic terrorist attack in New York.

Walk two blocks down to City Hall. And then head down Chambers to the West Side Highway. That’s where the terrorist attack that killed eight people ended when an NYPD officer shot the terrorist. If he had kept going down the West Side Highway, instead of crashing into a school bus, he would have eventually been within attack range of the 9/11 Memorial. And maybe that was his original plan.

But his message was very clear. He shouted it as he left the truck with which he murdered 8 people.

“Allahu Akbar”. These were the last words on the Flight 93 flight recorder. Mohamed Atta had advised his fellow 9/11 hijackers to, “Shout, ‘Allahu Akbar,’ because it strikes fear in the hearts of the infidels.”

Sayfullo Saipov, the Muslim terrorist who carried out the latest attack, was just listening to Atta’s advice. The 16th anniversary of the attacks has passed, but the hatred of Allah’s killers burns as hot as ever.

And the attack carried clear echoes of 9/11.

Saipov had listed an address in Paterson, NJ. Paterson, known to the locals as ‘Paterstine’ for its sizable Islamic community, is where the PLO terror flag flies over City Hall and where Islamic terrorist sympathizers celebrated after their compatriots murdered thousands on 9/11.

Paterson is also where 6 of the 9/11 hijackers lived.

The attack by the Muslim settler from Uzbekistan was almost identical to previous Car Jihad attacks in Europe. Right down to using a fake firearm. But New York City had avoided the non-stop terror wave that engulfed Paris and other European cities thanks to the hard work of the NYPD.

But every time the NYPD broke up an Islamic terror plot, the media and its leftist allies would howl that the racist police had entrapped another innocent mentally ill Muslim. When the Newburgh Four plotted to bomb synagogues in the Bronx, the media was in their corner. HBO even aired The Newburgh Sting, a piece of propaganda whitewashing the terrorists. The revisionist documentary played at the Tribeca Film Festival. And Tribeca is the site of the latest Islamic terrorist attack.

Linda Sarsour, the leading Islamic activist on the left, defended Ahmed Ferhani, who had also plotted to blow up a synagogue, and Shahawar Matin Siraj, who was convicted of plotting to blow up a Manhattan subway station, as victims of NYPD entrapment.

But it’s hard to think of a NYPD or FBI terror bust in New York that the media didn’t undermine. The Nation and the Guardian led the lynch mob. But soon CBS, The Atlantic and the New York Times joined in. All the Muslim terrorists that the NYPD had stopped were really immature and easily manipulated young men. The plots had been invented by paid informants. And it didn’t stop there.

For the last four years, the ACLU and other pro-terror groups had waged an effective lawfare campaign to cripple the NYPD’s counterterrorism. And they succeeded. The NYPD’s ability to send informants into mosques was handicapped. New York cops were now required to consider the “impact” of informants on mosques after Islamist groups claimed that their presence discouraged mosque attendance. The approvals required made it much harder to use one of the more effective terror prevention tools.

The Demographics Unit, one of the most important big picture intel tools for the NYPD, was shut down. But that wasn’t enough. Even when the NYPD agreed to a settlement, Judge Charles S. Haight Jr. insisted that it didn’t go far enough to protect “law-abiding Muslims and believers in Islam who live, move and have their being in this city.”

Sayfullo Saipov moved his being and the truck it was in over the bodies of New Yorkers leaving tire tracks over corpses. The Manhattan attack, like every Islamic attack before it, could have been stopped. But the NYPD’s hands had been tied. And the left had done the tying. It defended every Islamic terrorist that the NYPD had arrested. And prevented the NYPD from investigating mosques and radicalization.

Now it has what it really wanted. Dead Americans. And it has their blood on its manicured fingers.

Sayfullo Saipov had come here in 2010. In that short amount of time he managed to amass criminal records in Pennsylvania and Missouri for traffic offenses. After stints in at least three other states, he went on a killing spree that took eight lives and wounded as well as traumatized countless others.

Dem leaders in New York are already rolling out the standard messages urging everyone to go back to life as usual. Mayor Bill de Blasio called the attack “cowardly”. But the attack wasn’t cowardly. It was vicious and murderous. It’s Bill de Blasio and the other politicians who crippled the NYPD because they were afraid of political pressure from Linda Sarsour and CAIR who are the real cowards.

They are cowards with blood on their hands.

The New York media’s first response after the attack was to try and blame road rage. Before long, you will see it running the standardized “Muslims fear backlash” stories that are a staple of every effort to sweep the latest Islamic terrorist attack under the rug along with the blood and the bodies.

Islamic terrorists like Sayfullo Saipov are able to do what they do because they have a long list of collaborators like the ACLU, Democrat politicians, Federal judges and the mainstream media.

While law enforcement fights a desperate battle to stop the next Saipov, the men and women tracking the terrorists know that if they get their man, the media will make them the villains. Just ask the good people who brought down Ahmed Ferhani, James Cromitie, Shahawar Matin Siraj and so many others.

Sane societies celebrate those who risk their lives to keep them safe. The leftist culture machine does everything it can to destroy them and to aid the Islamic butchers who run over pedestrians for Allah.

The way to stop the next Saipov is to untie the NYPD’s hands.

After every shooting, the left insists that anyone who opposes gun control wants people to die. But guns don’t hop off the shelf and shoot people. And trucks don’t run over pedestrians on their own.

Islamic terrorists drive them into crowds, over pedestrians and cyclists, in London, Nice, in Berlin, in Jerusalem and in New York City. And leftists who refuse to stop them might as well be behind the wheel.

Leftists who would rather control the police than the Islamic terrorists want people to die.

Could This Be Another End Run Around Education Privacy?