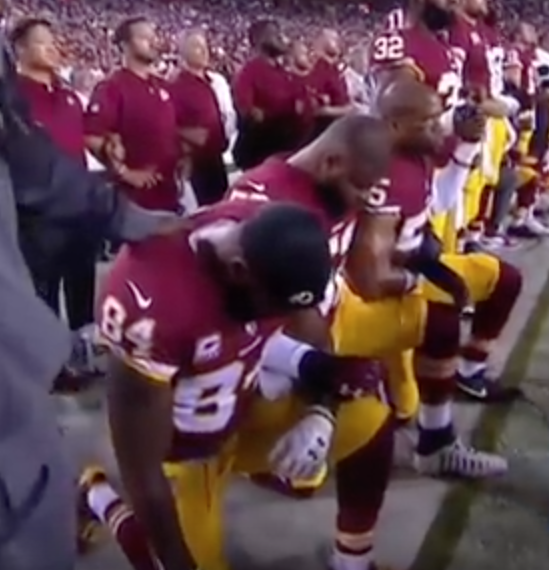 Today on a popular cable news program the discussion turned to the despicable NFL players who kneel instead of standing for our National Anthem.   Some were bemoaning the fact that this boorish behavior is ruining the NFL business because so many people are no longer attending or even watching games on television.  Various “solutions” were mentioned and hashed over.

Finally one of the talking heads said, “There is no reason for this to ruin the NFL because it’s only about six players, and in comparison to how many NFL players there are, those six aren’t really a big deal.”

That got my attention.    I wonder….. If this commentator knew that there were landmines buried on only six playgrounds in her state, would she still take her children to the park?  It is only six parks, and that few would not be a bid deal, right?  If she knew there were only six snipers perched and waiting on the freeway, would she drive that day?

Think of all of the recalls we are warned about.  When it is confirmed that contaminated chicken has been sold in one grocery store, very quickly all of that shipment is removed from the case.  Think about safety recalls on automobiles.  When it has been proven that there is a dangerous malfunction in a certain make of automobile, all of the cars of that model are recalled and repaired at the manufacturer’s expense.  They do not wait until the majority— or even six cars— demonstrates the problem.  No, the recall is issued and parts are replaced forthwith.

The flag matters.  The National Anthem matters.  And the manner in which we treat the flag and the National Anthem matter.  Since Bible times men have marched to war carrying their banners.  The Mongol Genghis Kahn carried a stick with six yak tails as he wreaked havoc in Asia and across the Steppes in the 1500s.  History tells us that the mere sight of Genghis Kahn’s banner struck such fear and terror into his enemy’s hearts that they surrendered.

One’s respect for the flag and National Anthem are rooted in one’s knowledge and appreciation of history.  Knowing how and why our nation came to be helps us to find our place and to personally invest ourselves in the integrity of our nation, thus we are proud to salute our flag.  But when you know nothing of the absolute and devastating sacrifices made by the Founding Fathers, and when you do not understand what it means to say “we mutually pledge to each other our lives, our fortunes, and our sacred honor,” then you have no foundation and taking a knee is easy.

This holiday season as I sum up my bounty of blessings, I am thankful to be an American.

Daniel Greenfield: Why the Democrats Really Turned on Bill Clinton