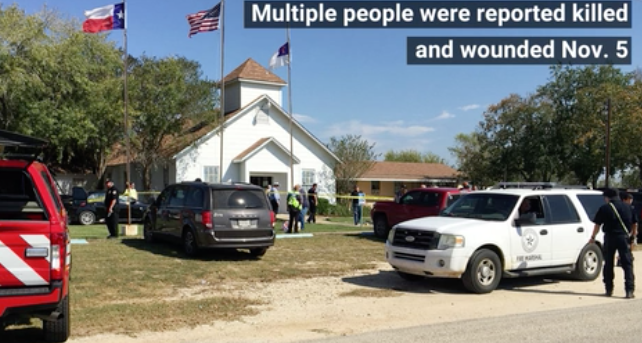 First Baptist Church of Sutherland Springs serves a resource to the small community of approximately four hundred residents. Located approximately thirty miles outside of San Antonio, the lone gunman, now identified as 26-year-old Devin Patrick Kelley targeted people outside the church before opening the doors around 11:30 a.m. and began targeting every member worshipping inside.

Dressed in all black tactical gear with a bullet proof vest, witnesses stated he unloaded what is believed to be an assault weapon with intended carnage that lasted approximately fifteen minutes. It has been reported a member of the community engaged Kelley where he fled the scene but was later captured and is reported dead. No word as of now whether the mad man was killed by a local resident or whether he took his own life; but one thing is certain and that is he was a coward.

It is unfathomable to understand how a person so evil can take the lives of innocent people. People who were doing nothing more than exercising their faith in worship. Worshipping in a place for peace and prayer, innocent people were attacked by a mad man wielding a gun killing over half the congregation, including a two-year-old and the fourteen-year-old daughter of the church Pastor.

Already, just hours after the horrific incident, Democrats such as former Arizona congresswoman Gabby Giffords provided her opinion to the media that the need for gun control must be addressed.  In days ahead we will surely hear from the left wing media how organizations like the NRA (National Rifle Association) are once again responsible for an unspeakable tragedy.

For now, we as Americans need to come together and pray for those affected by this senseless tragedy. Pray for our country. God bless Texas.

The 2017 Virginia Governor's Race in the Final Stretch