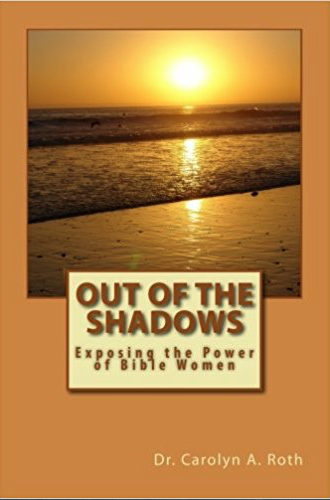 Politically Savvy Women of the Bible

This is the first book I have ever found on this interesting topic, Out of the Shadows: Exposing The Power of Bible Women by Dr. Carolyn Roth. Dr. Roth is a psychologist and a conservative Christian author of several books in which she endeavors to give lay readers a better understanding of scripture. She is not only a student of ancient Hebrew Society, she also has studied the Middle East in general with an emphasis on the Mesopotamia civilizations. That has given her a unique perspective into the actions of people we have long heard about in Biblical times.

I do not want to imply that Dr. Roth’s intentions were to write a book about politics, however in a broad definition we have to realize that the art of politics exists everywhere in life. That is true of not only government, but in business, labor, education, the entertainment world and is also true when we were kids in school. How kids work with others, choosing friend groups, selecting clubs to belong to and even sports. As a classroom teacher I saw plenty of that.

Carolyn Roth’s theme is that God created women to have and use power. Bible women were not as a rule in high positions of authority, however they exercised power through rational, social and emotional influence. The first part of the book makes an analysts of the different types of power that exists for women and uses may illustrations of women in both the Old Testament and New Testament. I have never understood how some feminists have claimed Christianity is anti woman as there is no real evidence of this. Paul in his letters, for example, sites various women by name who opened and led their homes in worship services. Paul even makes an emphasis on there being no difference between men and women in the eyes of God.

However, what I enjoyed most were the detailed individual case studies of Biblical women we are very familiar with. There would not be room to cover all, however a few stood out especially for me.

Like many people, I have wondered why in the world Sarai, later to be named Sarah, would encourage her husband Abraham to have a child by a servant girl Hagar. Was this an immoral act? In Mesopotamia society servants and slaves were considered a part of the family. It was common for wives unable to have children to permit their husband to take a servant girl as kind of a secondary wife and to have children by them. However, the deal was that children born of this liaison did not belong to their birth mother, Sarai was to be the mother in charge. Of course after the birth of Ishmael Hagar lorded it over Sarai and violated local custom. After Sarai did give birth to Isaac Ishmael became secondary. Sarai was acting politically in what she thought was fulfilling God’s promise to Abraham. Her momentary lack of faith did not bring punishment.

Deborah was the only female judge in the Bible and one of the most influential. She also was given the power of prophesy and could see dangers in advance to Israel that she tried to prevent. When Deborah took over Israel had fallen into idolatry. Her role then was to be not just chief executive, but also a religious leader serving as God’s voice. She also became commander in chief of armies and selected the military leaders who were needed to defend the land against Canaanite oppression. Think of England’s Elizabeth I and Margaret Thatcher.

One of the best known women was Bathsheba because of the famous story of King David, how he wooed her and even had her husband put to death. Some have said Bathsheba actually expected David to spy her washing herself on the rooftop and knew her beauty would draw his interest. Just a theory, but it did lead to a long lasting marriage and just as David repented, she very likely did also. Bathsheba became more than a token wife. She not only advised her husband at times, but she made sure that their son Solomon over all his step brothers would be king. Family leadership was first with her and I have to wonder if this would be a bit like Barbara Bush.

This of course does not mean that all the women described in the Bible were concerned with bettering things for the general population as well as their family. If I believed in reincarnation I would say Hillary Clinton was the rebirth of the wife of King Ahab, Jezebel. She exercised real authority and power over her husband Ahab, his advisors and even military leaders. Citizens feared her much more than the king and idolatry was supreme. Jezebel had no problem issuing orders and using her husband’s name to cover for herself. Her vision was for a new world order. Jezebel’s horrible death was predicted and to be expected. I must add there is another Jezebel described later on and they are not to be confused.

Now the reader my wonder why did I leave out other well knowns like Ruth and Esther and they are in the book as are so many others.

One illustration in the book especially includes Mary, the mother of Jesus. There is no doubt that she was an influence on our Lord in his growing up, not fearing to reprimand Jesus when necessary. Jesus became human to bring about our salvation and his growing up would be human. The role of motherhood is stressed very strongly in the New Testament. Dr. Roth considers Mary the most powerful of Biblical women and illustrates how. To me one very touching scene in the Gospels is when Jesus is dying on the Cross and he considers it important to look after his mother. He gives John the authority to do so. In the writing of his Gospel Luke was the only non Jew and not having been around during the events described by others he acted as an investigative reporter. Luke interviewed hundreds, perhaps thousands, of witnesses. There were things that he could have only learned about Jesus from Mary so he obviously interviewed her a great deal.

I highly recommend this book whether your interests are political or Biblical. Dr. Carolyn Roth has provided a great service by writing this and it may be purchased through HERE on Amazon or Barnes and Noble.

Daniel Greenfield: The Personalization of the Political