It has been a little over six years that I was a third year student at the University of California Berkeley. My friends and I were members of the best party on campus: The Berkeley College Republicans. On September 1, 2011, a controversial bill had passed the California Senate and was now sitting on the desk of Governor Jerry Brown – Senate Bill 185 or SB 185 for short. It was a bill that essentially contradicted the 1996 California proposition 206 which put a stop to affirmative action practices in public institutions. While proposition 206 put an end to discrimination made based on race, sex, or ethnicity, SB 185 would allow these discriminations to be made during the college admissions process, ultimately creating a loophole by the Californian legislature against the will of the voters.

For those who do not know me and my friends personally, here’s a little about us. We are Asian, Hispanic, African American, gay, straight, men and women from all parts of the socio-economic spectrum with different experiences that have molded and shaped us into who we are. What united us was our common beliefs of individual liberty and the idea that our worth is beyond a line item on an application. Each of us brings to the table a diversity of thought that challenges any black and white stereotype. I, myself, am Chinese-American. My parents immigrated from Taiwan in the 1980’s and their parents fled from China to Taiwan during the Communist Revolution. I was born in Los Angeles, raised in a middle class family in Orange County, and grew up speaking Mandarin and eating rice and dumplings with chopsticks. As I grew up, I still loved rice and dumplings but I also fell in love with the visual arts, country music, and travel. For me, the culmination of my experiences could not confined into a check box. 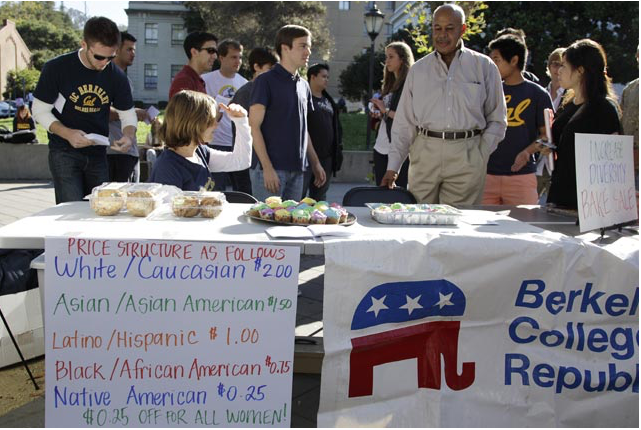 Now fast-forward to September 27, 2011. We may never have made such a big deal out of it had the student government not used our public funds to organize a phone bank urging our governor to sign SB 185 into law. After our weekly board meeting, we posted a simple Facebook event just like we would for any other event informing what we were doing and why we were doing it. We would throw a satirical bake sale that was inherently racist to mimic the way affirmative action played out in reality. We charged Caucasians the most, then Asians, then Hispanics, and lastly Native Americans. Women would get 25 cents off. (Looking back, we should have charged Asians the most as they were the majority of students accepted to universities in California.) We did not mean for it to catch anyone’s attention but our own club members and perhaps a libertarian or two that was on our list serve. That was, until, one (or more) of the student groups like the Nation of Islam on campus decided to call the media.

What we quickly learned is that when the media is called, things will get crazy. We never wanted the media involved. The media for conservatives is rarely good news. Under the leadership of our President Shawn Lewis, we were able to control the message and only output the simple truth: that we were against race, ethnicity, and gender-based discrimination in college admissions. CNN, MSNBC, ABC, and NBC, all started covering this event. It grew from a Facebook event to a national and eventually international discussion of race-based admissions. Even Jay Leno and the unhappy ladies of The View talked about us on their shows. My dad, perusing the Taiwanese news one night, called me into his room to see the animation they created supporting us. Our External Vice President Mia Lincoln and I were filmed walking out of Safeway buying eggs and flour. But most importantly what we discovered was that once we peeled away the politics to reveal the facts, the public was educated and actually agreed with us.

I am not sure if you noticed, but in my recount of this event, I never define between us and them, conservatives and liberals. This is because we learned that facts when taken out of siloed politics are bipartisan. During the same week of the bake sale, Survey USA did a poll of people across the country asking them how they felt about race-based affirmative action and the results were encouraging. More blacks than whites and more Democrats than Republicans said that colleges should not consider race in admissions. Furthermore, more Hispanics than whites and more Democrats than Republicans said that they should not consider gender.[1] While this event started with the Berkeley College Republicans, those who agreed with us were oftentimes those are typically thought of to be on the other side of the table.

At the end of the day, Governor Brown vetoed the bill and we learned a lot. Apparently we created enough ruckus to bring to attention an otherwise minor issue that would have likely slipped into law. We also generated discourse and forced otherwise apathetic people into forming some kind of opinion towards an important issue. Libertarians, Democrats, Conservatives, Christians, Atheists, minority or not, someone from each group stepped out to support us. They may not have agreed with our delivery method but in principle we were on the same page. That, arguably, is the power of free speech allowing us to openly express our views and I think we brought quite a bit of pride to Berkeley’s famous Savio steps.

Joy Chen is graduated with a degree in Chinese History from the University of California Berkeley in 2013 where she served as the Director of Operations for the Berkeley College Republicans and the Editor-in-Chief of the California Patriot. She launched her career in software sales working for Oracle, PlanGrid, and Deltek. She now resides in Orange County with her family and is an avid indoor-cyclist, yoga-enthusiast, and frenchie mama.