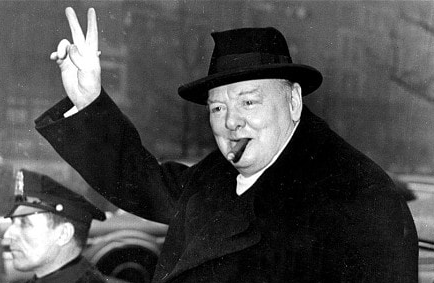 Should you ever visit London a must stop is the War Room Bunker located on King Charles Street. It is both a museum and a recreation of the underground bunker where Winston Churchill made his headquarters during World War Two. As you enter you see rooms filled with maps, typewriters and a few wax figures of men and women at work. You will be taken back in time when you hear the sound of someone whistling and a sharp order, “Quiet mate, don’t you know there’s a war going on!”

You next see the museum which is largely a tribute to Winston Churchill with displays everywhere covering his life. There is even the small dinette and bed room he shared with his beloved wife Clementine. She was likely the only person to know this very complex man, considered by many to be the number one leader of the twentieth century. Bold, brash, outspoken he was seen by critics as a lover of war. However, his wife later told friends that the night before D-Day she found him sitting on the bed weeping. It was the thought of the thousands of lives that would be lost June 6, 1944. He felt responsible. This is hardly the image of a war monger. 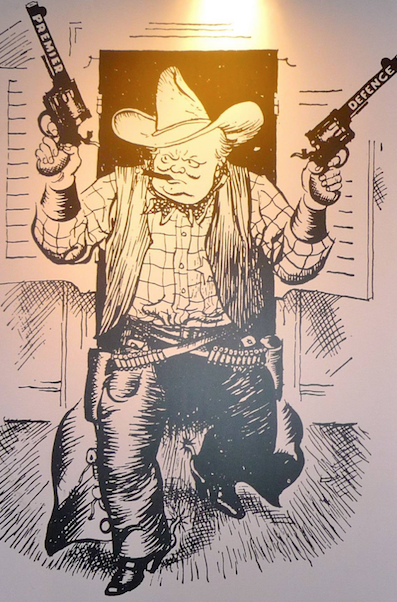 In all the displays there is one that stands out, especially to Americans. It is a portrait of a cartoon of Churchill dressed as a cowboy coming our of a saloon swinging two six shooters ready for action. In our nation President Ronald Reagan had the title of cowboy given him because of his Western films and love of ranching. Sometimes it was used in admiration and sometimes in derision. Th same was true of Texas born President George W. Bush. Some in the media are already using this description for Eastern born President Donald Trump. The British are very familiar with our Westerns and it should not be a surprise that Churchill would be given that label and depending upon the source with either admiration or derision. In the latter case likely because of his reputation of shooting from the hip. 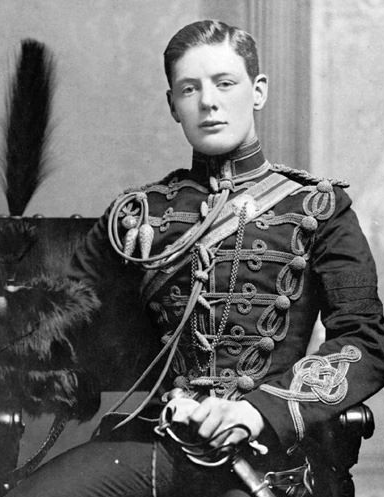 No politician has had more ups and downs than Winston Churchill, however he ultimately triumphed. He had a privileged childhood beginning November 30, 1874 when he was born and raised in Blenheim Palace, another place in England well worth visiting. His mother was originally from America which may have contributed to his interest in our nation. After a normal education for his class he became a military journalist traveling to many parts of the world. His political career began in 1899.

Churchill was never a good party man and often had as much hostility from his own as he did opposition because of his style, attitude and philosophy. His love of country went beyond party and he was in and out of government because of this. Between the world wars he was ridiculed because of his antagonism against the rising Communist state of Russia and the Fascist states of Germany and Italy. His warnings were not taken seriously until Hitler invaded Poland. World War Two was where the name of Winston Churchill would be known throughout the world. Anthony Storr wrote ” In that dark time, what England needed was not a shrewd, equable, balanced leader. She needed a prophet, a heroic visionary, a man who could dream dreams of victory when all seemed lost.” Churchill made wide use of the radio to stay in touch with the people and gain their support. However, the people sick of war finally voted against him and his party in 1945 once the war ended in Europe.

Not one to waste his time, Churchilll resumed what he loved doing before the war, writing and painting proving what a Renaissance person he was. His six volume set “The Second World War” is considered classic. However, in 1951 leadership under a Socialist leaning party was proving inept and he was called back into leadership. Churchill served until 1955 when he retired, but what a legacy was left as future leaders would always be measured against him.

Churchill was truly a visionary and Communism and Fascism were not the only types of governemnt that concerned him. In 1899 in his book “River War” he wrote the following about Islam, a quote Churchillian experts have authenticated:

“A degraded sensualism deprives this life of its grace and refinement, the next of its dignity and sanctity. The fact that in Mohammedan law every woman must belong to some man as his absolute property, either as a child, a wife, or a concubine, must delay the final extinction of slavery until the faith of Islam has ceased to be a great power among men. Individual Muslims may show splendid qualities, but the influence of the religion paralyses the social development of those who follow it. No stronger retrograde force exists in the world. Far from being moribund, Mohammedanism is a militant and proselytizing faith. It has already spread throughout Central Africa, raising fearless warriors at every step; and were it not that Christianity is sheltered in the strong arms of science, the science against which it had vainly struggled, the civilization of modern Europe might fall, as fell the civilization of ancient Rome.”

We are seeing these words fulfilled and we cannot say he was shooting from the hip as he was often accused of doing. He could be bombastic, however he also could show great humility. Communication by print or radio was very important to him and this writer suspects that were he alive today he would be very active on Twitter and other social media.

This is not written to say that President Donald Trump is another Winston Churchill or that he is destined to be, however it is very possible. Like Churchill our president is very passionate about his country and puts it first. If our president can successfully rally the people the way Churchill did, despite opposition in both major political parties, it could be a truly historical time ahead for the United States.

Cowboy indeed. We could use more of those in Congress.

The Big Business of College Sports