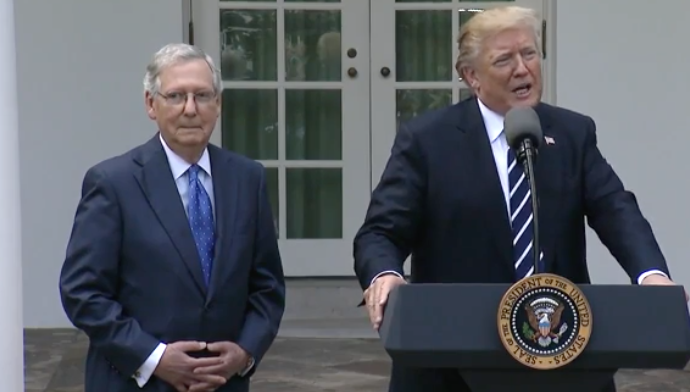 What type of magical powers do people like Mitch McConnell, John McCain, Lindsey Graham and others have over DC?

WASHINGTON
Donald Trump on Monday threw a life raft to the most unpopular Republican in Congress, publicly expressing his support for Mitch McConnell and pledging to ask his anti-establishment friends to leave the Senate leader and his friends alone.

Until Monday, the Senate Majority Leader’s reputation as a canny tactician had taken a beating this year. Major legislation stalled. Critics from his own party called for his ouster. His approval rating was far below that of other congressional leaders from either party.

Then along came Trump on Monday, standing beside the Kentucky Republican in the Rose Garden, praising him as a leader who shares his agenda and pledging to ask McConnell’s chief antagonist to lay off the Senate leader’s GOP allies.

“We are probably now, at least as far as I’m concerned, closer than ever before,” Trump said, declaring a friendship with McConnell that predates either man’s life in politics. “The relationship is very good.”

Trump has tweeted criticism at McConnell, but the president insisted Monday the two were tight and were “getting close” on a tax overhaul and a health care initiative, which has languished in the Senate.

Yet even as they parried questions from reporters, there was clearly an audience of one: Former Trump aide Steve Bannon, who on Saturday declared a “season of war” against establishment Republicans and singled out McConnell, warning that he’d meet the same fate as the slain Roman leader Julius Caesar.

“We’ve cut your oxygen off, Mitch,” Bannon, now the executive chairman of the ultra-conservative Breitbart News, threatened at a gathering of conservatives in Washington.

Trump initially told reporters on Monday that he understood “where Steve Bannon is coming from” and shared his former aide’s frustration with a recalcitrant Senate that hasn’t enacted his agenda.

But after lunch at the White House with McConnell, Trump was on the Senate leader’s side. Trump said he’d speak with Bannon about his strategy of backing primary challenges to Senate incumbents. Bannon declared victory in Alabama’s Senate primary last month, as his candidate, former Alabama Chief Justice Roy Moore, trounced McConnell’s candidate, Sen. Luther Strange.

“Steve is doing what Steve thinks is the right thing,” Trump said before adding, “Some of the people that he may be looking at, I’m going to see if we talk him out of that, because frankly, they’re great people.”

McConnell warned Bannon’s gambit wouldn’t work, and listed several 2010 and 2012 Republican Senate nominees pushed by the tea party movement and other conservative uprisings. They were candidates who lost after proving unpalatable to general election voters in November.

“You have to nominate people who can actually win, because winners make policy and losers go home,” McConnell said, noting that Republicans in 2014 looked to nominate candidates who could win general elections.

“Our operating approach will be to support our incumbents, and in open seats, to seek to help nominate people who can actually win in November,” McConnell said.

It appeared unlikely that Bannon would accept his former boss’s counsel. Breitbart reported Monday that Bannon will attend an event Tuesday for Kelli Ward, a Republican who is challenging Sen. Jeff Flake, R-Ariz., a top target of conservatives.

It was clear that McConnell and Trump are still not entirely on the same page. As the president insisted Democrats and Republicans were meeting to develop something “very special” on taxes by the end of the year, McConnell sought to lower expectations.

“The goal is to get it done this calendar year. But it is important to remember that Obama signed Obamacare in March of year two,” McConnell said, referring to 2010.

“Obama signed Dodd-Frank in July of year two,” he added, referring to the financial regulatory law passed after the 2008 financial crisis.

The taciturn McConnell, who generally takes only a few questions at his weekly Senate press availability, stood at Trump’s side for 40 minutes, smiling broadly several times while the president fielded questions. As they returned to the White House, Trump reached out to steady McConnell as the senator appeared to trip up a stair.

McConnell has been under mounting pressure to deliver. A recent Harvard-Harris poll showed him with the lowest favorability rating of any elected official with a national profile. Conservative groups last week called for McConnell and his leadership team to step down, arguing that he’s failed to advance their agenda.

“Republicans were given full control of the federal government,” six conservative activists wrote to McConnell and his leadership team. “They — you — have done nothing….You were not going to ‘drain the swamp’ You are the swamp.”