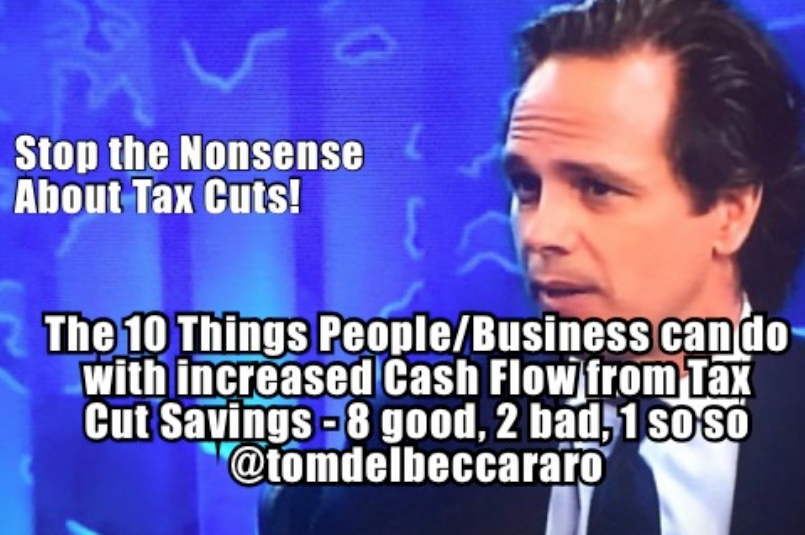 Here we are again discussing the good and bad of tax rate reduction.

For those against it, then abandon common sense like there is no tomorrow. They literally blame tax rate reduction on bad economic times – like the Democrats in DC who blamed the Bush 43 tax cuts for the bad economic performance in 2008 (yes, pls forget about the housing debacle – it was the small tax rate reductions at the top from 39.6% to 36% that occurred between 2003 and 2005 that caused the economic implosion in 2008).

They also claim that tax rate reduction does not help the economy – otherwise known as saying, trickle down economics does not work and cannot lead to jobs. Well, they are just plain wrong.

To prove that, I offer you the 10 things that happen when Tax Rate reduction leaves more money in the pockets of taxpayers and corporations. 7 of them are good. 2 are bad and 1 is so-so.

Seven Good Things can happen from the increased cash flow of a tax rate cut:

People/Corporations/Businesses Buy Things. They buy things like food, clothing, cars, supplies, furniture, fixtures, equipment, reports, other businesses, etc. – All of those are good for the economy because it means other companies or people are making money and hiring workers or buying supplies to meet that demand.

They Hire People/Pay Higher Wages. One response to increased cash for companies is to hire people or for people to hire other people to fix their home or their car, etc. All of that is good for the economy. Any time additional people are employed or earn more through longer hours or higher pay, they are making money and buying products from companies (like shoe stores or grocery stores or car dealers) who in turn buy products and employ more people to meet that demand. That increases the size of the economy.

They Put Money Toward Research and Development (R&D). If they don’t spend it, they sometimes engage in R & D. That is good for the economy because (a) it employs people to do that R & D, who then can buy things from companies that in turn buy things, etc. and (b) it often leads to productivity gains, which is good for the economy because that often leads to higher wages long term, and higher wages means employees can buy more, etc.

They Make Outside Investments/Buy Stock. That is good for the economy because that money goes to companies that can expand and, therefore, the ability to buy things and hire people goes up for those companies, etc.

They Declare A Dividend/Profit. Corporations and businesses with increased cash flow, may also declare a dividend or profit share. That means money from the corporation or business goes to others who then can do one of the things on this list of 7 good things.

They Donate or Gift. Many times, corporations/businesses and people donate additional cash flow, which gives other people and businesses the ability to do any of the above.
Those are the basic things that you can do with money. I defy anyone to subtract from the list. I defy anyone to say any of those are bad for the economy.

One of the fallacies of those against cutting tax rates is that they say it won’t result in higher wages. They make that argument because they assert there is no guarantee that a dollar saved will directly result in #2, higher wages or jobs.

They are just plain wrong. The question is higher wages for WHO and When, not IF.

Common sense tells you that all of the above means more money for someone – and that is the key. Maybe it is not the wage earner for the business that got the tax savings but instead, the business from whom products were purchased with the increased tax flow. Or, perhaps it is the contractor who hires someone to meet his increased work demand, after GM declares a dividend or Facebook does the same, etc. Perhaps it results in a restaurant owner opening a new restaurant and fills it with workers.

The money has to go somewhere and that means other people sooner or later benefit – and, by the way, demanding that all tax savings goes to wages or new employees makes no sense if what a business needs is a new roof, or a new car or to replace worn out machinery.

Two Bad Things people could do with money:

Burn it
Hide it in a mattress (not to be confused with refusing to report income because of high rates).
Obviously, that implies they take money out of the economy. That rarely happens, however, so it is not a worthy discussion.

One Good and Bad thing

There is one more thing that people do – buy government bonds. That is a form of savings. Yes, some government bonds go to worthy causes. However, it is not as good as private savings because often governments engage in wasteful spending. Also, if the reason why bonds are purchased is high tax rates (like after WW I), then overall, that is not as good for the economy.

Most importantly, of the 8 good things above, NONE OF THEM ARE BAD for the economy. None.

Yes, they affect the economy in different ways. But it is not logical nor is it common sense to say that people keeping the money they already have can hurt the economy.

Nor is it logical to say it won’t help the economy. People do things when they get money. They don’t burn it. When money moves, it moves somewhere. That is good.

Thomas Del Beccaro is the former Chairman of the California Republican Party and in 2016 he is running for Barbara Boxer's U.S. Senate seat. He is the Publisher of PoliticalVanguard.com, author of The New Conservative Paradigm and frequent talk radio and television commentator. He is a contributor to Forbes.com and the DailyCaller.com among other conservative publications. He is considered to be the most Heard Voice in CA Republican Politics and Mona Charen said, 'Not since Newt Gingrich in the 90s has a Republican activist so clearly analyzed what has gone right and wrong for the party and the Conservative movement.' Human Events called him 'One of the GOP's most effective communicators.' The Economist Magazine said 'Republican spines are . . . stiffened by conservative bloggers such as Tom Del Beccaro."

The Swamp is (Finally) Being Drained