Last year, a football player by the name of Colin Kaepernick took it upon himself to flagrantly insult his home country, the United States of America, by choosing to remain seated on his bench rather than standing at attention while the Star Spangled Banner was played before the start of a game. Kaepernick, himself an African-American man, did this in protest of what he perceived as rampant racism – especially police brutality – against black people in the US. Because the nation tolerated these things, he said, he could not in good conscience stand for its anthem.

What happened next was even worse. A friend of Kaepernick, a fellow football player who was apparently sympathetic to this display, suggested that sitting out the anthem wasn’t enough. Kaepernick should kneel during the song’s refrain, in direct reference to the custom of American soldiers taking a knee at the graves of their fallen brothers in arms – a show of camaraderie and respect. Kaepernick, for reasons known only to him, thought this was a fine idea.

Many years ago there was a television advertisement “Hey Kid, Catch!” was the television advertisement for Coca Cola starring Pittsburgh Steelers defensive tackle Officially titled “Mean Joe Greene” which debuted on October 1, 1979. Following a football game, a child (Tommy Okon) offers an injured Greene a Coke, prompting “Mean” Joe to grab the bottle and guzzle the entire contents, before turning to limp away. He then turns back toward the now-crestfallen child, smiles and tosses the kid his team jersey with the now-famous line, “Hey kid, catch!”

Fast forward to today, and this situation is rapidly getting out of control. It’s now common before a game begins to 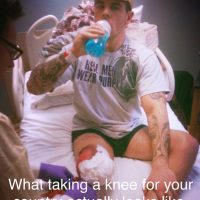 see a percentage of a given team’s roster kneeling during the national anthem while the rest stand. Owners have taken the field and joined their players, sometimes by linking arms with the team. The entirety of the Dallas Cowboys knelt before the playing of the anthem, only to then stand properly while it actually played. This controversy has even become difficult simply to avoid: when one team chose – for the explicitly stated reason of staying out of the argument – to stay off the field until the anthem was through, they were booed and jeered upon actually arriving. This particular team also put one of their players in the awkward position of breaking ranks with the rest, as the man – a military veteran who had served three tours in Afghanistan, and seen combat – refused to hide his face, and stood at the entrance to the field with his hand over his heart. “Image from Facebook”

Needless to say, patriotic Americans all over the nation have roundly rebuked this “protest”, calling out the participating players for deriding their country. It should come as no surprise that President Donald Trump, a firebrand American if ever there was one, has had particularly harsh words for the kneelers, calling for them to be fired and the entire NFL boycotted until this nonsense stops. It is hardly necessary to describe the reaction leftists have had to the President’s position – suffice it to say it contains familiar noises about squelching the players’ “freedom of speech”.

Which is, of course, absurd? No one is saying that the people doing this do not have the right to express their political opinions, no matter how cowardly and un-American they may be. There’s a difference between calling on the NFL to refuse to associate with such individuals, and using the force of the state to block those individuals from speaking.

Of supreme irony in the free speech argument is Kaepernick himself, who started this trend of national disloyalty. Because when he protests the national anthem of the United States, he stands against everything this country represents, including the cherished principal of free speech itself. By kneeling, he even specifically disrespects the American military, which has fought, bled, and died to protect that right. He spits directly in their face, sarcastically thanking them for risking and giving their lives to allow him to say what he likes, then using the free voice they gave him to tell them to buzz off.

Maybe, just maybe, Kaepernick and his followers should meditate on the symbolism of that.

The Asymmetry of the Israel-Palestinian Conflict