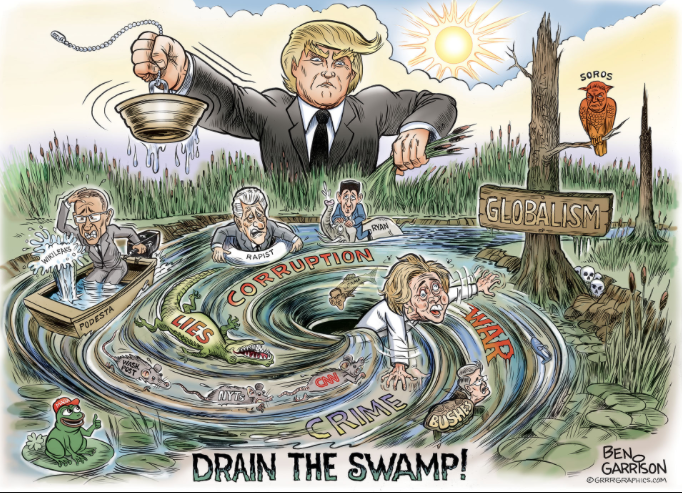 It’s been a good couple of weeks for President Trump. The whole Russian collusion narrative has boomeranged on the Democrats and especially the Clinton’s. Trump has successfully framed the NFL National Anthem kneeling protests as a patriotic issue and has pretty much won the argument. The NFL is losing viewership and money. His tax reform proposals are gaining momentum. But probably the biggest new story is the continued swamp draining. When candidate Donald Trump promised to “drain the swamp” in Washington, I never thought the swamp would cooperate and start draining itself. But that seems to be happening.

This week Arizona Senator Jeff Flake announced his retirement from the Senate and said he would not run for re-election in 2018. The reason he gave: It’s all Trump and his tweet’s fault:

“Reckless, outrageous, and undignified behavior has become excused and countenanced as telling it like it is when it is actually just reckless, outrageous, and undignified. And when such behavior emanates from the top of our government, it is something else. It is dangerous to a democracy. Such behavior does not project strength, because our strength comes from our values. It, instead, projects a corruption of the spirit and weakness.”

I want to know where Senator Flake was the last eight years when President Obama said things like “if they bring a knife we bring a gun”. Was that outrageous or undignified? Republican politicians for years have been constantly hit with nasty criticism from the Democrats. They are often called racist, misogynists, homophobic and the list goes on. Yet they sit there and take it without pushing back. Now, oh my goodness, Trump puts out critical tweets and all of a sudden they are aghast and claiming victim status. Get out the smelling salts and the fainting couches.

Some other pertinent comments from the speech:

“It is often said that children are watching. Well, they are. And what are we going to do about that? When the next generation asks us, why didn’t you do something? Why didn’t you speak up? What are we going to say? Mr. President, I rise today to say, enough. We must dedicate ourselves to making sure that the anomalous never becomes the normal.”

First of all, the “voters” are watching (and have been for at least a decade now) as elected politicians like yourself have promised to deliver then break that promise once in office. Like when you were a member of the pro-amnesty Gang of Eight. And while you remained silent as President Obama consistently criticized this country and retreated from global leadership, giving rise to the Arab spring and ISIS. To claim now that you advocate America being a global leader is hypocritical (by the way, Trump IS reinstating American leadership, just on more favorable terms to us. Imagine that!). And the voters are speaking up with the election of Donald Trump and saying ENOUGH. Enough with the “normal” of doing nothing to limit government or protecting our country. Senator Flake has it completely backward when he said, “Were the shoe on the other foot, would we Republicans meekly accept such display from dominant Democrats? Of course we wouldn’t, and we would be wrong if we did.”

You DID and you WERE! Unbelievable! You complain about separation of powers but said nothing about Obama’s executive power grabs. More hypocrisy as he went on to say,

At least this is true. That accurately describes the Republicans in Congress the last 8 years.

“It is clear at this moment that a traditional conservative, who believes in limited government and free markets, who is devoted to free trade, who is pro-immigration, has a narrower and narrower path to nomination in the Republican Party, the party that has so long defined itself by its belief in those things.”

No one is against immigration. Voters are against illegal immigration. And tell me exactly where that belief in limited government has been the last 10 years on the Republican side of the isle. The ones who have a narrow path to nomination are the ones who continue to put globalism ahead of the American people.

“This spell will eventually break. That is my belief. We will return to ourselves once more, and I say the sooner the better. Because we have a healthy government, we must also have healthy and functioning parties.”

Of course. It’s a spell don’t you see. Those darn voters. When they start demanding better representation they are under a spell. I remember reading a comment about Hillary’s campaign last year to which the basic point was that she was never able to make the connection between what the voters WANTED and what she thought was BEST for them. That sums up liberalism in one sentence but unfortunately it is true of most elite/establishment politicians from both sides of the aisle.

Here is the truth: Jeff Flake is not running for re-election because he knows he couldn’t win a primary fight (as he said himself). His approval ratings are in the low 30’s. But instead of doing some soul-searching to find out what the voters might be saying to him, he decides to use his retirement speech to “stand up to Trump”…by taking his ball and going home.

The media portrays all this as a GOP civil war. I see it as a re-alignment. We the people are taking back our proper place at the top of the political process. And the establishment’s monopoly is being undermined and may soon topple. I see it as a good (and necessary) thing.

The Nuclear Blast of Russian Collusion