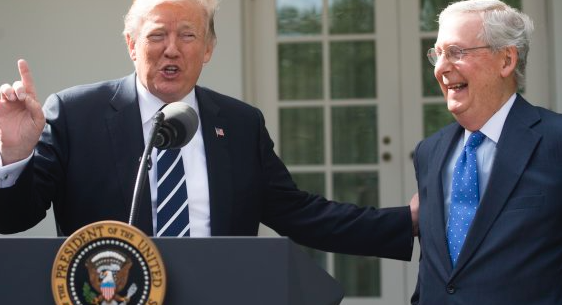 On Tuesday President Trump held a join press conference with Senate Majority Leader Mitch McConnell. Here are some highlights from it:

“The single-most significant thing this President has done to change America is the appointment of Neil Gorsuch to the Supreme Court. But it’s not just the Supreme Court. There are a lot of vacancies at both the circuit court and district court level, as the President has indicated, of young, conservative — and when we say conservative about a judge, what we’re talking about here are, the kind of the people the President is appointing to the courts believe that the role of a judge is to try to rule based upon what the law says, not what they hoped the outcome would be.

Justice Scalia used to say, if the judge is not occasionally unhappy with the conclusion he reached, he’s not a very good judge. Or as Justice Gorsuch put it down in my state a couple of weeks ago, judges don’t wear red, they don’t wear blue — they wear black.

And those are the kind of people the President is sending up to the Senate to be confirmed. Many of them, as he pointed out, are younger and will be on the bench for a long time, and have a great deal to do with what kind of country we’re going to have far into the future.”

But one of the most incredible details of the joint press conference was that Mitch McConnell actually smiled! Amazing! Normally he looks like he’s taken a spoonful of vitameatavegamin.

Overall, Trump demonstrated once again his ability to stay on offense. He continues to confound the media and the Democrats by not shrinking and slithering away under their constant assault. Other Republicans should take notice and emulate it.