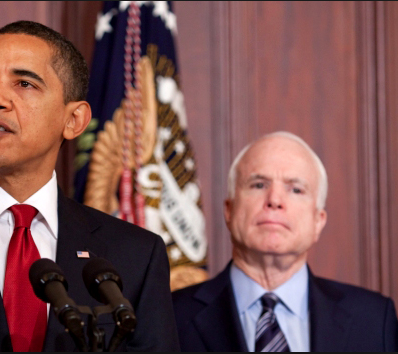 It’s a specter that should stalk the nightmares of Republican leaders: a Senate chamber, packed on Christmas Eve, as lawmakers gather to decide the fate of a tax package that will shape the GOP’s political fortunes. The bill remains one vote shy, and then Sen. John McCain walks in, pauses before the desk, and delivers his second thumbs-down dagger of the year.

For that reason, the Arizona Republican, who is fighting a public battle with brain cancer, will be among his party’s most closely watched as the year winds down and the tax debate gears up. Yet over his decades in public life, McCain has traced a zigzagging line on the subject, leaving little clear indication of how he’ll approach a potentially decisive vote. A look at the senator’s record on taxes shows that three things seem most important to him: public debate, some help for the middle class, and not exploding the deficit.

The senator’s vote matters because with a 52-seat majority, Republicans can’t afford more than two defections (Vice President Pence could push the package over the line in the event if a tie).

So far, McCain’s potential objections sound familiar. The senator helped tank the GOP’s Obamacare rewrite by arguing in part that it hadn’t followed regular order — that is, there were no actual hearings on the measure before it was pushed to the floor.

“I’ve stated time and time again that one of the major failures of Obamacare was that it was rammed through Congress by Democrats on a strict party-line basis without a single Republican vote,” he said after his vote against the “skinny repeal” bill this summer. If Republicans can agree on a budget, it will set the tax package on the same path. And the spending blueprint would also strip some Republican commitments to transparency, including a pledge to post an official accounting of a tax measure’s budget impact more than a day before a vote.

But unlike the Obamacare rollback attempts, tax bills will be heading through committees — a development that McCain calls “encouraging.” The senator has said he is “confident that by moving through the normal legislative process we can produce a bill that reforms our tax system, boosts our economy, and improves the lives of the people we serve.”

On tax policy itself, McCain has proved a moving target. He opposed the 2001 Bush tax cuts — one of only two Republicans to do so — citing what he called the bill’s lopsided benefits for the wealthy. “I cannot in good conscience support a tax cut in which so many of the benefits go to the most fortunate among us, at the expense of middle-class Americans who most need tax relief,” he said. Two years later, he was one of only three Republicans to vote against the next round of Bush cuts, again citing its skew toward the rich but also the deficit impact of another round of breaks as the country faced mounting war bills.

McCain reversed himself in 2006, voting to extend the cuts. He argued at the time that ending the breaks would amount to a tax hike. “American businesses and investors need a stable and predictable tax policy to continue contributing to the growth of our economy,” he said. Anti-tax activist Grover Norquist gave him a backhanded compliment for that, calling it “a big flip-flop, but I’m happy he’s flopped.”

Running for president in 2008, the senator evinced some supply-side thinking, declaring in an ABC News interview that cuts to capital gains taxes would yield more revenue, an effect he said that history demonstrated “going back to Jack Kennedy.” (The Congressional Budget Office has found those cuts provide a sugar-high revenue boost that wears off after a year or two.)

California: Secession From US 'Easier Than Catalonia'