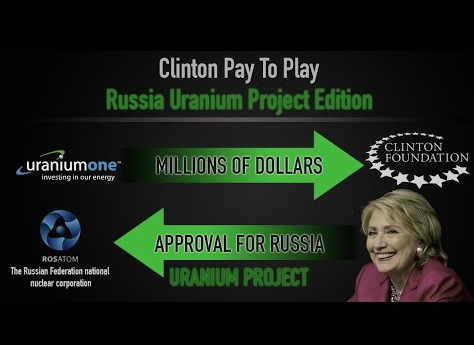 When President Donald Trump tweeted “Firm involved with discredited and Fake Dossier takes the 5th. Who paid for it, Russia, FBI, the Dems, or all?” people assumed it was one of Trump’s midnight rants. But, he exposed what looks likely to become the greatest political scandal in America’s history.

For a year, the Democrats, aided and abetted by a Hillary Clinton supporting media and a Deep State Establishment which includes Obama hangovers in the new Trump Administration as well as ‘Never Trump’ Republicans, have been searching under every rock and stone for evidence of a Trump collusion with the Russians. Before leaving office, FBI head, James Comey contrived to appoint his friend, Robert Mueller, to be the Special Counsel to investigate links between the incoming president and the Russians, portrayed as the greatest evil on the face of the planet.

Now, it seems, the nuclear storm they unleashed of Russian collusion has suddenly changed direction and is blasting the Democrats and the Establishment fully in their own faces. In a two-pronged attack their demons have turned against them in what Trump calls “the Washington swamp.”

Christopher Steele, a British intelligence agent, offer the anti-Trump opposition information that could sink the Trump Campaign. The information came out of the Kremlin. This fake Russian intel was offered through a Russian-infected NGO named Fusion GPS. It was designed to help the Clinton Campaign defeat Donald Trump. There was a price to be paid for this dossier. James Comey, the head of the FBI considered paying for it but, despite recent denials, it was revealed that the price was paid to Fusion GPS by the Hillary Clinton Campaign and the DNC. Millions of dollars were paid in several payments to Fusion GPS through law firms as cut-outs to cloak where the money was ending up. The dossier was shared with the FBI who sat on it rather than bringing it, as they should, to the attention of Congress.

An FBI informer wanted to bring the details of the dossier and name those involved in the scandal to Congress, but he was threatened by the FBI and by Loretta Lynch’s Depart of Justice with criminal, not civil, charges including serving jail time. The whistle-blower’s lawyer has been campaigning that it was the FBI and the Attorney-General’s duty to bring this matter to Congress, and that they had no jurisdiction to threaten this employee with criminal charges and incarceration.

Congress Oversight and Government Reform Committee member, Ron DeSantis, pressed the current Attorney-General, Jeff Sessions, to release this FBI agent and allow him to testify before Congress. The Attorney-General has now authorized this agent to speak with Congress. DeSantis said on the Lou Dobbs Show on Fox News TV that he is confident that the agent will not only give them details and names, but also offer supporting documents.

The affair is likely to include the breaking news of a huge multi-million-dollar scandal involving the Obama Administration, the FBI, the Department of Justice under the Obama presidency, Hillary and Bill Clinton and their Clinton Foundation.

Under the Obama and Clintons, the United States sold 20% of its vital uranium reserves to America’s evilest enemy, Putin in the Kremlin. Uranium is the prime ingredient for a nuclear bomb. Today, the United States has to import uranium to power its nuclear power plants – from Russia. Part of the agreement stated that none of this uranium could leave the United States but there is evidence that much of it has left America for Europe and, almost certainly to Russia. Russia also supplies Iran with much of their uranium for their nuclear projects. That is why this issue has important security connotations for Israel.

And, in a pay to play quid pro quo, $145 Million made its way from the Russian actors in this deal (acting for the Kremlin) into the coffers of the Clinton Foundation while Hillary Clinton was acting Secretary of State. Her husband, Bill, travelled to Moscow to give a $500,000 speech before having a private chat with Putin himself in his Moscow mansion. This, after Obama was recorded on an open mic in 2012 telling Russian Prime Minister, Dmitry Medvedev, “tell Vladimir that after my election I have more flexibility.” This was matched by Hillary Clinton pantomiming with Russian Foreign Minister, Sergey Lavrov, that they could press a plastic ‘Reset’ button.

This was the jovial atmosphere that accompanied the Obama Administration’s collusion with Russia which is now being revealed to have sold off one of America’s most vital strategic and security assets to “the greatest threat to any nation” according to FBI’s James Comey, or “Russia is at the top of America’s threat list,” according to Obama’s Defense secretary, Ash Carter, in 2016, or to a country that “engages in hostile acts,” according to Hillary Clinton.

Either way, the Democrats unleashed a nuclear storm when they went after Trump on trumped up charges of Russian collusion. Now they are about to reap the storm they created. It is likely to burn and destroy several Establishment figures. Watch out for the names Comey, Rosenstein, Wiseman, Mueller, Lynch, maybe Holder, two Clintons, and Obama.

If this is part of draining the swamp, so be it.

Barry Shaw is a Senior Associate at the Israel Institute for Strategic Studies.

The Swamp is (Finally) Being Drained

Jesus and the Storms of Life