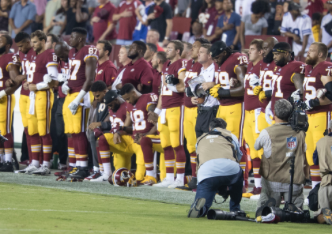 In August 1981 air traffic controllers (PATCO) went on strike.  They had carefully planned and executed their strike at one of the busiest times of the year, certain that would give them the upper hand.  President Ronald Reagan, however, was having none of it; he fired 11,345 striking air traffic control employees.   And so what happened?  Chaos? Doom?  Only for the 11,345 who lost their jobs. But for the rest of America, all was well; the FAA implemented their contingency plan, new people who wanted that job were hired, and there was barely a hiccough in the friendly skies.    I remember it well; I was very young and did not know that things like that could happen.  That event made a real impression on me.  I learned a big lesson that day:  Giants can be faced down.

Now let’s talk about football.  The “knee takers” have lost the respect of many patriotic Americans, and National Football League is losing fans and money.  This is nonsensical.

Today’s idiotic mantra is that “soldiers fought for the right for those players to not salute our flag or stand for our National Anthem.”  What a stupid thing to say; a reprehensible remark.  No serviceman ever risked or gave his life so that people would be free to not respect our National Anthem or the flag he fought under.  The truth is that because he willingly put himself in harms way all of us in this great land are free— free to live here or free to leave if one finds a better place where he is not offended and oppressed.  At best, if there is a “right” to be disrespectful it is a fringe benefit but definitely not the intended purpose.

This is a workplace issue, not a First Amendment issue. The First Amendment protects American citizens from the government suppressing our speech.  Football players are employees working for the person who owns the football team; the federal government is not involved.  Owners of all businesses make the rules, and employees follow those rules— and that includes the NFL. The owner of the team tells the players what uniform to wear, what kind of decoration will be permitted on shoes or uniform, what position they will play, they require a specific number of hours of practice, and there are numerous other rules that effect the players’ lives on and off the field.

Today some football players do not want to stand respectfully for our National Anthem, and the team owners are going along with this odd “freedom of expression” because the players are threatening to leave the League otherwise.  I wonder what the owners would say if the players decided that they were offended by the blowing of a whistle, and so they needed to “take a knee” at kickoff.  Just wondering.

No other employer permits his employees to publicly dishonor or disparage his place of business.  The First Amendment does not protect people from losing their jobs as a result of unacceptable posts on social media.  Every day we hear about people losing their jobs and even careers because this.

A word to football team owners:   Everybody is expendable.  These unruly players are killing your business; soon their damage will be irreversible.  While there is still time, follow the example of President Reagan:  Let the players go; better yet, fire them.   There are many other men who would be glad to play on your team and proudly salute our flag.