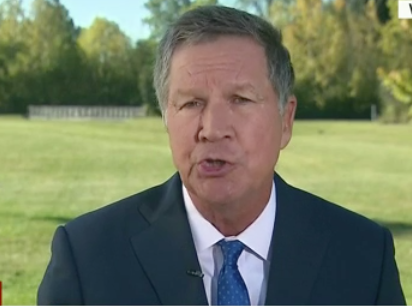 Don’t let the door hit ya on the way out…

Ohio Republican Gov. John Kasich said on CNN’s “State of the Union” Sunday that a time could come when he no longer supports the Republican Party.

“If the party can’t be fixed, Jake, then I’m not going to be able to support the party. Period. That’s the end of it.” Kasich said in an interview with anchor Jake Tapper.

Asked what that meant for his future in the GOP, Kasich said he was committed to the party and intended to win it over from the surging nationalist wing.

“I want this party to be straightened out,” Kasich said.

Kasich repeatedly pointed to public dissatisfaction with the Republican and Democratic parties, and referenced the strength of independent political identities. He said both parties needed to grapple with ideological currents pulling them away from the center, adding that he had “no idea what the Democrats are for.”

“What I’m trying to do is struggle for the soul of the Republican Party the way that I see it,” Kasich said. “And I have a right to define it, but I’m not going to support people who are dividers.”

Kasich made clear he did not support former Judge Roy Moore, the far-right Republican nominee for Alabama’s Senate seat with a history of incendiary comments on race, sexuality and religion. As for whether the Republican Party should continue to support Moore in the December special election, Kasich demurred and returned to his broader desire to reshape the party.

Kasich ran for president last year and became a frequent critic of President Donald Trump throughout the race. He has continued to criticize Trump since the inauguration and expressed his dissatisfaction with the right wing of the party as well as some of its major initiatives, like its attempts to repeal and replace Obamacare.

California Residents Give First-Hand Account of Shooting at Mandalay Bay