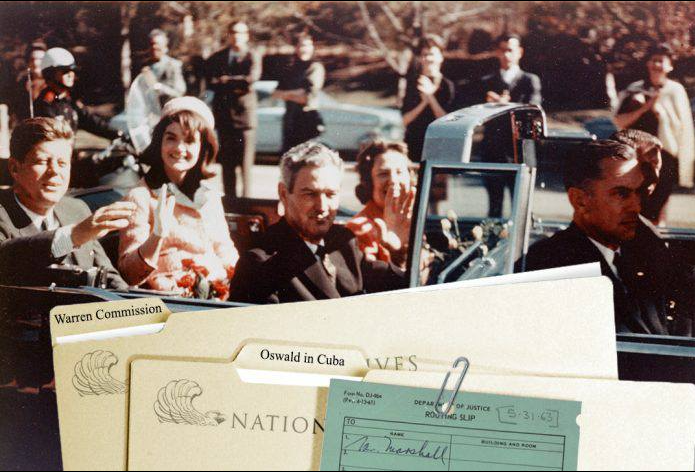 I have read over 600 pages so far from the statutory and POTUS ordered release by the National Archives and Records Administration.

Some things really jumped right out at me and I have made some conclusions about this, coming from the perspective of former sniper, Army Special Forces soldier, government employee, and intelligence analyst. Details and theory on the tactical and technical “who did it” later, but for now the following is my BLUF (Bottom Line Up Front) general assessment.

CAVEAT & PREFACE:  I have been a big defender of the CIA, FBI, NSA, and the rest of the IC, to include publishing multiple times to this as well as in conference presentations. I have stuck up for them many times and have known, met, and/or worked with many (well over 1,000) personnel from the FBI and Intelligence Community. There are many thousands of people in the U.S. Intelligence Community (IC), national security organizations, and federal law enforcement who are absolutely patriotic, hard working, dedicated professionals who love their country and do a great job. Some uncommonly heroic and altruistic. I have had the honor to meet and served with such professionals in all three categories. I also believe that we must protect classified information and intelligence tools as well as enforce CI and OPSEC at all cost.

I am also subject to multiple classified Non-Disclosure Agreements.

Additionally, I am not a “conspiracy buff” (and actually have a real problem with the personality profile that is, and avoid them and their social media).

1. THERE WAS AN OBVIOUS COVER UP.

The only reason why a government would over-classify the files and delay the release of them for decades, is because they had some form of involvment or connection to the event. The FBI and CIA are the ones that want files witheld. And petitioned at the last minute to withhold about 1% of the most damaging files, getting another opportunity to redact more of the evidence.

It is long past the time where compromising what are called “sources & methods” and current “equities” and operations are a concern. So, they cannot use that as an excuse.

Even if the assassination was not conducted by or facilitated by the US Government or a rogue element, there is obviously some degree of attribution to the FBI and CIA of persons who knew, dealt with, or collected intelligence on the alleged assassin (and possibly others that may have been connected), CONSIDER THIS: If this had not had some type of U.S. Government connection, then they would have moved heaven and earth to find and prosecute all who were involved. But, they did not. Instead, they were in a rush to close the case and seal the files. They wanted the files sealed for decades until the point where the guilty would not outlive the release date.

CONSIDER THIS: Who better to cover up or eliminate evidence than those who collect and investigate it? (That was my original assessment back in the 1980s when I began reading about this event, and I am now completely convinced of it.)

3.  CONSIDER THIS – SYSTEMIC AVOIDANCE OF ACCOUNTABILITY / CULTURE OF CORRUPTION & COVER UP

The released documents contain many specifics about U.S. government plots to assassinate more than one foreign leader. During that era, our government engaged in many planned and completed assassinations. They had the capability to do it and had training & technologies for that as well as sabotage & subversion. (Note: I personally believe that there are justifications for removing our enemies, especially military enemies and sponsors of terrorism. No doubt about it.)

5. DELAY OF REMAINDER OF FILES AT REQUEST OF FBI & CIA IS VERY TELLING (see White House press below) 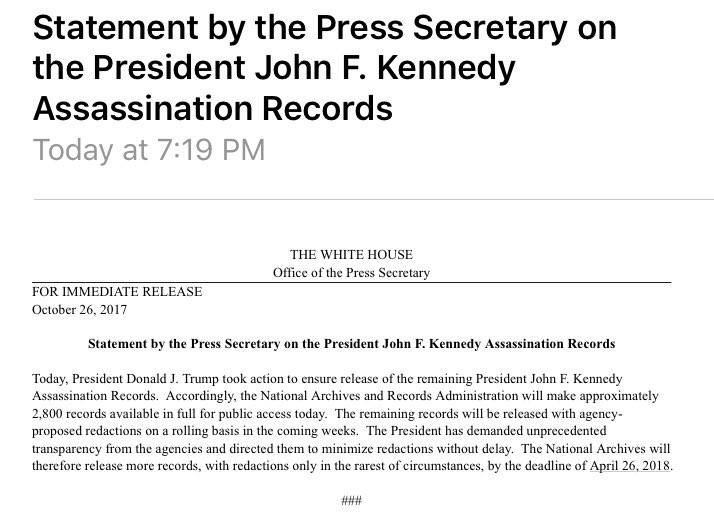 In many cases, there are very sound and vital reasons for declassifying and conducting authorized disclosures of classified information or capabilities.

The FBI and CIA had 25 years to prepare for the deadline mandated in the 1992 statute, yet were not ready on Thursday, October 26th, 2017 to fully comply with it. Now they want more time and insist that redactions of some of the remaining files may be warranted. This makes one wonder if they ever expected these files to be released to the public.

They have had over 56 years to figure this out. Yet, for the past 56 years, rather than offer to disclose what they know, they choose to conceal.

Many of us know that there are in fact very sound reasons for not making certain information public, and that it is for public good and in keeping with providing for the common defense.

However, in this case, many of us who know about classification and declassification believe that there is no sound reason for concealing the files in question, upon any sound reason or basis of national security, other than to avoid embarassment.

Therefore, as do others and some of my friends still in federal service, and some in the media, I think that the FBI and CIA are going to lose a lot of credibility on this. Especially getting the POTUS to agree to not release about 1% of the documents, the most damaging of them.

There may be a public, media, and Congressional outcry on this intentional delay.

The delay this week (and for decades prior to that) was a bad decision on their part.

What are they hiding?

Therefore, he President should:

I previously spent a lot of time here, looking at this event from a tactical & technical perspective based upon professional experience:

The Sixth Floor Museum at Dealey Plaza
Dealey Plaza John F. Kennedy Assassination Site.Dallas TX
Please see my previous post following the visit, to include some theory and questions.
https://www.facebook.com/JohnMPetersonIII/posts/873530192658635
Where the partial release of files is available from NARA:
https://www.archives.gov/research/jfk/2017-release

How Far We Have Strayed From Our Constitution

Justice MUST Prevail Over Collusion, Coverups, and Corruption in America!