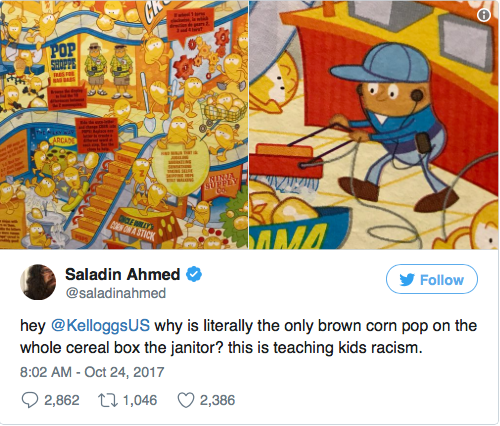 SALADIN AHMED is a thoughtful commentator on cultural diversity, whether speaking about mainstream publishing trends or the culinary arts. Combine that with the fact that Ahmed is the father of young children, and it’s not surprising that he was the one to call out Kellogg’s on an awfully odd cereal box.

It was Ahmed, a Hugo Award-nominated novelist, who tweeted Tuesday that the Michigan snack maker’s Corn Pops box was laced with racism. On the back of the box, all the Corn Pops characters were yellow save one brown figure — who happened to be the floor-sweeping janitor. Apparently even in fictional breakfast universes, the visual message seems to be: Diversity is limited and the lone brown character is cast in the blue-collar job.

Now, Kellogg’s says in response, it will change the art of the box.

“Yes, it’s a tiny thing, but when you see your kid staring over this breakfast and realize millions of other kids are doing the same,” tweeted Ahmed, himself a Michigan native who was raised in a working-class Arab American community. Ahmed has said in interviews that his family was involved in Detroit arts and that his father, Ismael Ahmed, co-founded the Arab Community Center for Economic and Social Services in nearby Dearborn.

Kellogg’s promptly apologized, saying that it “did not intend to offend” and declaring its commitment to inclusion. 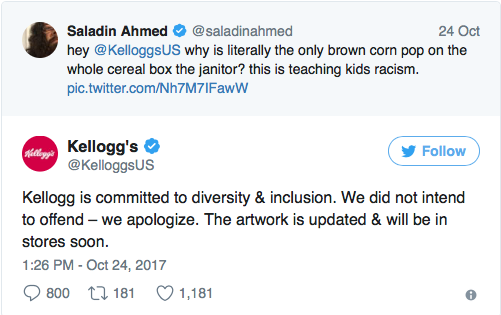